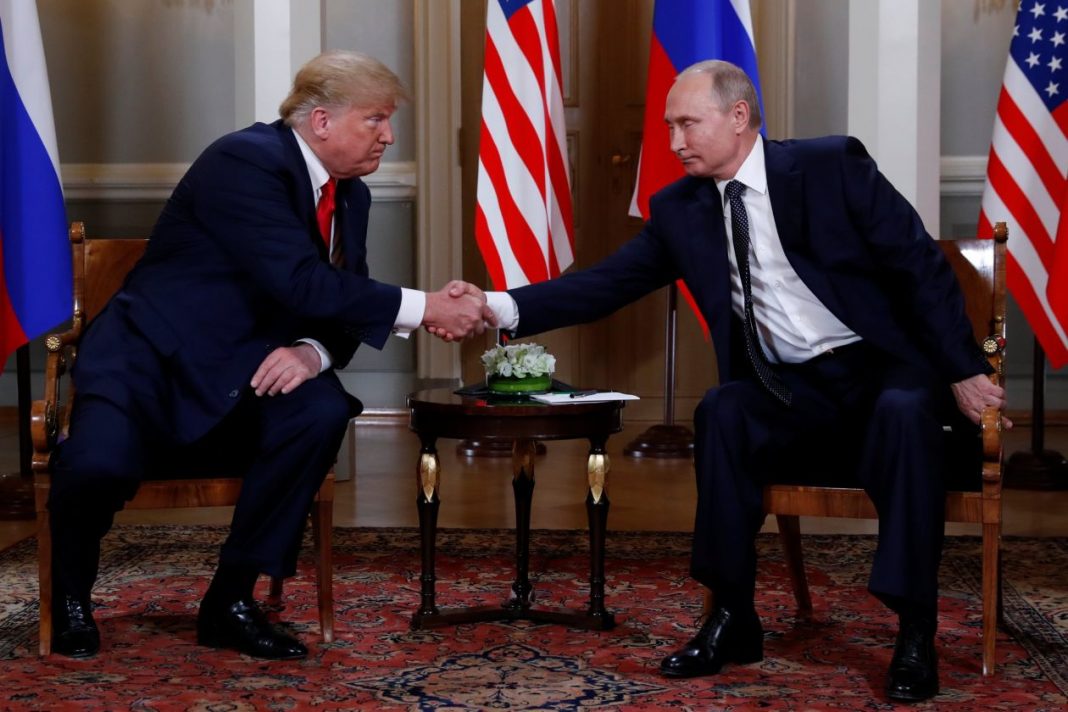 Hours before one-on-one meeting with Vladimir Putin, U.S. president tweets about many years of ‘U.S. foolishness and stupidity’

President Donald Trump began his private meeting with Vladimir Putin here Monday by declaring that he expected to have an “extraordinary relationship” with the Russian leader, hours after he blamed the U.S. for the poor state of its relations with Moscow.

Speaking at the Presidential Palace at the outset of their one-on-one meeting, which is expected to last about 90 minutes, Mr. Trump said the two leaders would discuss issues related to trade, the military, nuclear weapons, missiles and China, including their “mutual friend” Chinese President Xi Jinping.

“We have great opportunities together as two countries,” Mr. Trump said, as the two leaders sat beside each other, with American and Russian flags arrayed behind them. “Frankly, we have not been getting along very well for the last number of years…I really think the world wants to see us get along.”

“We are the two great nuclear powers,” Mr. Trump added. “We have 90% of the nuclear—and that’s not a good thing, it’s a bad thing.”

“Now is the time to have a serious conversation about our bilateral relations and about various sore spots in the world, and there are many of those,” Mr. Putin said.

In his remarks, Mr. Trump made no mention of Russia’s efforts to interfere in the 2016 U.S. election, an issue that he has said he would raise with Mr. Putin after Special Counsel Robert Mueller on Friday charged 12 Russian officers with hacking the computers of Democratic organizations and ensuring the pilfered information became public.

Earlier in the day, Mr. Trump in a tweet blamed the U.S. for the state of its relationship with Moscow that he said had “NEVER been worse,” raising the question of how hard he intends to press Mr. Putin on issues including election meddling and Russia’s aggression in Crimea.

Mr. Trump tweeted that “many years of U.S. foolishness and stupidity” and what he termed the “Rigged Witch Hunt”—referring to Mr. Mueller’s investigation into whether Trump associates colluded with Russia’s efforts to interfere in the 2016 U.S. election—had caused current poor relations. The president has denied colluding with Russia, and Moscow has denied election meddling.

The Russian foreign ministry’s Twitter account on Monday “liked” the president’s tweet blaming the U.S. for the state of the relationship, and quoting the tweet, wrote: “We agree.” Russian state-owned news agencies also prominently featured the tweet. A headline on the Russian news site RIA Novosti read: “Relations with Russia have deteriorated because of the stupidity of the United States, said Trump.”

No note-takers were seen in the room with the two leaders ahead of their meeting. Mr. Trump had been reluctant to include a note-taker in the one-on-one meeting because he is wary of leaks, said a foreign official briefed on the plans. But the lack of note-taker raised concerns among some diplomats and former U.S. officials that there would be no official record of the meeting, posing risks including that the Russians might offer a misleading account of what was discussed. A notepad and pen sat beside Mr. Putin on a small table; Mr. Trump didn’t appear to have any such pad.

After their private meeting concludes, the two leaders will be joined by senior officials on both sides, followed by a press conference.

Top aides to Mr. Trump have said the goal is to open a conversation rather than accomplish a reset of U.S.-Russian relations.

As he arrived at the Mantyiemi Palace here to meet with Finnish President Sauli Niinistö on Monday morning, Mr. Trump ignored a shouted question about whether he would tell Mr. Putin that election meddling constituted a “red line.”

He said he would “do just fine” in the Putin meeting, and described the North Atlantic Treaty Organization, whose members he clashed with at last week’s summit over military spending and a range of other issues, as “never…more together.”

Mr. Trump’s meeting with Mr. Putin comes after the U.S. president spent much of last week in tense meetings with longstanding U.S. allies at the NATO summit and delivering critical comments about U.K. Prime Minister Theresa May’s handling of the Brexit process. He left Brussels affirming the U.S.’s commitment to NATO and later apologized to Mrs. May.

Mr. Trump, who has repeatedly blamed his predecessor for Russian interference in recent days, tweeted Monday: “President Obama thought that Crooked Hillary was going to win the election, so when he was informed by the FBI about Russian Meddling, he said it couldn’t happen, was no big deal, & did NOTHING about it. When I won it became a big deal.”

Former President Barack Obama sought a reset of U.S.-Russia relations early in his administration. But the situation soured after Moscow’s annexation of Crimea in 2014, which prompted its expulsion from the former Group of Eight, now the Group of Seven. The U.S. has since heightened sanctions on Moscow and expelled Russian diplomats for its interference in the 2016 election and following the poisoning in the U.K. of a former Russian spy and his daughter, an act that Western countries say was likely carried out by Moscow.

Mr. Trump in recent days has said he would raise the issue of election meddling with Mr. Putin, but suggested he didn’t plan to press the matter particularly hard. In a CBS interview Sunday, asked whether he would ask Mr. Putin to extradite the Russian officials charged by Mr. Mueller, he said: “I hadn’t thought of that…But I certainly, I’ll be asking about it.”

Allies, including the U.K. and Germany, have said they are supportive of the meeting between Messrs. Trump and Putin. But some diplomats and U.S. lawmakers have raised concerns that while the summit offers Mr. Putin an end to the American effort to isolate Russia following its 2014 annexation of Crimea, it is unclear what the U.S. will get in return.

Mr. Trump also alarmed diplomats with his description of the European Union as a “foe” in the CBS interview Sunday, in which he aligned the longstanding U.S. ally with Russia when asked about his biggest global competitors.

“I think the European Union is a foe, what they do to us in trade,” Mr. Trump said. “Russia is a foe in certain respects. China is a foe economically.”

Of particular concern to NATO allies is whether Mr. Trump might make concessions on Crimea and reverse the longstanding U.S. and NATO position that Crimea belongs to Ukraine. The president has made comments in recent months that appear sympathetic to Russia’s position on the annexation.

Jon Huntsman, the U.S. ambassador to Russia, told NBC Sunday it was “highly unlikely” there would be a change in position on Crimea. But, he said: “The agenda is the president’s. Everything will be his call.”

Write to Rebecca Ballhaus at Rebecca.Ballhaus@wsj.com