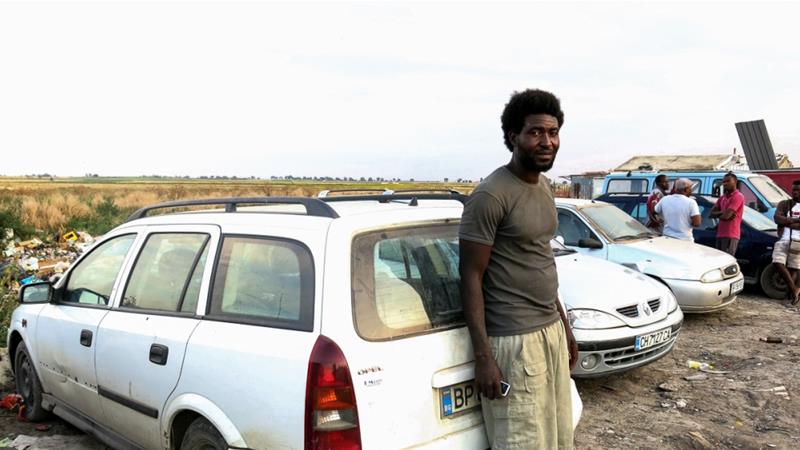 Thousands of Africans pick fruit and vegetables for a pittance as supermarkets profit, and face violent abuse

Filling one crate with oranges earns him a euro ($1.17) during harvest season, which runs from November until March.

If he’s lucky, a nine-hour workday in the biting winter of the vast Gioia Tauro Plain will bring in 25 euros.

He reached the Mediterranean island of Lampedusa on a migrant boat four years ago.

“The dinghy on the Libyan coast was my only opportunity for survival,” he says. “My boss in Libya tried to kill me after I lost one of the sheep I was guarding. I had to escape.”

nce in Italy, he ended up in Rosarno, an infamous mafia stronghold, but also an agricultural hotspot for tangerines, oranges, olives and kiwis.

Around 2,500 African crop-pickers work in the area.

They are essential to the local economy – most Italians have either left the countryside over the past few decades or refuse to work for such low wages.

Migrants live in shacks built from cardboard, wood, plastic and scrap metal in a polluted industrial area on the city’s periphery.

It is not known exactly how many African crop-pickers there are in Italy.

In 2016, Coldiretti, a farmers’ group, said that there were 120,000 migrant workers mostly from Africa but also eastern Europe and other parts of Italy.

Potable water and electricity are nowhere to be found in the sprawling camp in Rosarno.

Workers build makeshift toilets or simply relieve themselves in the fields.

Qassam Mohammad, a 44-year-old Gambian with chronic back pain that prevents him from working in the fields, sells hot water to the labourers for a few cents.

After a fire destroyed the shantytown last year, Italian civil defence built a new camp with running water and electricity a few metres away but equipped it with just 500 beds.

“It was the peak of the season and we were 3,500,” Madiheri says. “It was not enough to host us all. Police threatened to destroy what was left of our shelters, and to send us away.”

Bulldozers have obliterated the San Ferdinando camp several times over the years.

In 2010, migrant workers protested after three labourers were injured in a racially-motivated shooting. Hundreds of migrants were ordered to leave in what some commentators called ethnic cleansing – one politician reportedly said Rosarno had become the world’s “only white town”.

In June this year, Madiheri and two of his fellow union-aligned colleagues were collecting scrap metal from a nearby impounded furnace when a gunman opened fire.

The assailant, a local who is now in custody, killed Madiheri’s Malian colleague, Soumaila Sacko.

“I was with Sacko the day of his murder. I saw everything,” Madiheri says. “I had to leave the camp amid fears of retaliation. It is not safe for me here any more.”

Seasonal workers are often subject to racism and abuse in Italy.

Many agricultural employers often work by the “caporalato”, an illegal employment system in which labourers are exploited for very little pay. A law against the practice passed in 2016, but results have been scarce.

“Workers get fixed-term contracts of up to three months, but not all working hours are declared,” says Abdelmajid Hanoun, a member of Unione Sindacale di Base (USB), the same local union the assaulted workers belong to.

To complicate the situation, Italy’s nearly 20-year-old immigration act only grants residency permits to migrant workers possessing contracts. When the contract ends, they can be expelled.

Lengthy bureaucratic processes mean permits frequently arrive late, often towards their expiration. An appointment for their renewal can take workers up to three months, leaving them in a limbo.

Meanwhile, employers of the Gioia Tauro Plain’s nearly 400 declared farms often have separate registers for workers and inspections. Owners can and do sidestep social security payments, and farm hands are cheated out of unemployment benefits when the season ends.

Farmers also shrug off their responsibilities by hiring a middleman from within the African community who recruits labour in exchange for a percentage. This “boss” is also in charge of workers’ transportation. If inspectors happen to discover any illegal practices, the blame falls on him.

Mamadou Dia is a member of Doctors for Human Rights (MEDU), an aid group offering health and social care to migrant agricultural workers.

“This year, things got even worse. Agreements signed in previous years by local authorities have not been respected,” he says. “The conditions in which workers live are appalling. There are some 35,000 empty houses in the agricultural plain. Why are these houses not used to host workers instead of spending millions to build new camps?”

In the southern province of Foggia, 500 kilometres north of Gioia Tauro, thousands pick tomatoes, olives, asparagus, artichokes and grapes from June to October in the country’s largest agricultural plain.

Again, they live in ghettos and are paid no more than four euros an hour – they are legally entitled to between 6.50 and 7 euros.

“I earn between 30 and 35 euros a day. I stay here all year but always change employer. No one has legal contracts in the area.”   ASSANOKO, A WORKER WHO ARRIVED IN ITALY IN 2011

Union-affiliated workers and their leaders occupied the city’s cathedral in protest last October when a daily delivery of 10,000 litres of drinkable water stopped.

The local bishop joined the demonstration and contacted the regional council to remind them of the water agreement. The district magistrate soon ordered the immediate resumption of the water delivery.

Torretta Antonacci resident Malian Ibrahim Assanoko says he made more money elsewhere in Europe, but the Dublin Regulation – which requires asylum seekers to be processed in the country they first arrive – forced him to return to Italy.

“I earn between 30 and 35 euros a day,” says Assanoko, who arrived in Italy in 2011. “I stay here all year, but always change employer. No one has legal contracts in the area.”

He demanded an end to illegal practices and called for better conditions.

“Farms need crop-pickers,” he said. “Regardless of whether we are talking about people with a residency permit or Italians, employers must provide food and accommodation to the labourers. … when we talk about farm hands, we talk about the rights of the workers.”

Exploitation in the agricultural sector is not limited to the impoverished south.

In the affluent northern town of Saluzzo, a flagship European agricultural area famed for its kiwis, peaches, apricots, blueberries and plums, success comes as abuse is ignored.

Workers’ salaries don’t reflect their performance and crop-pickers are often paid off the books at between 4 and 5 euros an hour, union members say.

They are not provided with the food and accommodation they are legally entitled to.

The municipality has put 350 beds inside an old barrack at the workers’ disposal.

There are many more than 350 workers, and makeshift camps have been banned.

At least 200 people sleep on the street, using cardboard boxes as mattresses. Many more are expected to arrive.

“The government must realise that we are in 2018, and the racist messages its members are launching are based on ignorance. When racism talks, criminals listen up.”

Besides the misuse of European funds, experts and activists pin the blame on the retail industry and large supermarket chains.

“There is a fierce competition to keep prices of agricultural produces as low as possible,” says Antonello Mangano, an Italian journalist and founder of terrelibere.org, an investigative and research platform. “This mechanism that focuses on quantity rather than quality affects producers caught in a cut-throat global competition they cannot sustain.”

Today, a kilo of oranges sold to the process industry brings a farmer some 6 cents, or 25 cents if for direct consumption.

Supermarket prices instead vary from 1.5 to 3 euros.

“We have either small farms or large estates in Italy,” Mangano says. “The latter are more advantaged because of the quantity they produce. Still, they both need a mediator to sell their products to supermarkets or the process industry. There are always several passages involved. Each of these steps pushes up prices.”

Luciano Ieri, from the sustainability department of the COOP Italia supermarket, said his company launched its Good and Fair programme in 2016.

“We buy products from our partners at a slightly higher market price, and still manage to stay competitive,” he says.

The retailer has conducted more than 1,700 inspections across its partner farms since endorsing the ethical code SA8000 in 1998.

Meanwhile, far-right interior minister Matteo Salvini is pushing a hard line against migrants into Europe, announcing Italian ports would be closed “all summer” to NGO ships rescuing those trying to cross the Mediterranean from Africa to Europe.

He also called for a Europe-wide alliance against “mass immigration.”

Back in the camps, frustration runs high as workers demand justice.

It’s raining near Rosarno, everyone is out working in the fields.

As Madiheri walks through the camp, he stops in front of Sacko’s shelter.

“He began building the new shelter here, he wanted something better for himself,” Madiheri says. “The government must realise that we are in 2018, and the racist messages its members are launching are based on ignorance. When racism talks, criminals listen up.”