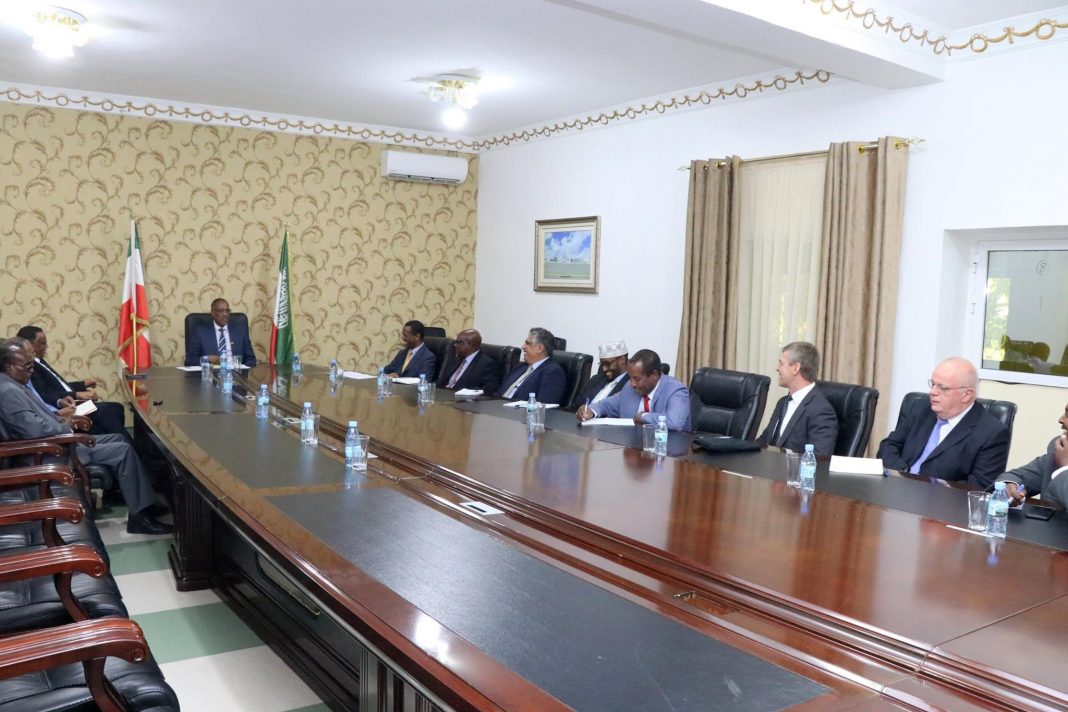 High-level delegates representing the United Nations Assistance Office for Somalia (UNSOM) and Inter-governmental Authority for Development (IGAD) arrived in Hargeisa, Sunday, as part of a shuttle diplomacy between the Republic of Somaliland and the Somalia federal state of Puntland.

His Excellency the president of the Republic of Somaliland, Musa Bihi Abdi, received the delegation at his office today. With him in this meeting was the House Speaker of the House of Representatives, Basheh Mohamed Farah, the Deputy Speaker of the Guurti- the Upper House of the Somaliland Parliament, and the Minister of Foreign Affairs and International Cooperation, Saad Ali Shireh.

At the end of the meeting, Minister Saad,  Mr. Guyo, and Mr. Zenenga summed up the points raised at the meeting with the President.

Four working points were raised with the President, as they had been with other stakeholders they had discussions with before, the delegates and the minister confirmed.

The President, they said, welcomed that a peace dialogue must begin for the two sides preceded by a complete ceasefire and an exchange of war prisoners with immediate effect, as it was highly imperative that humanitarian aid reaches civilians displaced by the armed conflict at the Tukkaraq area.

President Bihi, however, established with the delegation that some of the issues certainly belonged to a roundtable talks with the federal government within whom Puntland was a member.

The delegation expressed gratitude on how seriously the President has underlined the points raised, and how sincere he was on returning peace and stability to areas affected by the military engagement with the federal Somalia state of Puntland.

Immediately upon arrival on Sunday, the delegation went into close, charged consultations with groups and individuals which included the two opposition parties, high-ranking officers, and MPs originally hailing from the conflict area.

Somaliland has always maintained that, although it had every right to reach its internationally demarcated boundaries with Somalia, it preferred peace and dialogue to solve the land dispute with Somalia rather than do it at the point of a gun.

The process of implementation of common ground covered is expected to commence very soon.

The delegation had similar discussions with the administration and traditional leaders in Puntland before their arrival in Hargeisa.

Three days earlier, the Special Representative of the UN Secretary-General, Mr. Michael Keating, had equally pressing discussions with the Puntland President, Dr. Abdweli Gass, and a selection of traditional leaders on the issue of a peaceful settlement to the Tukkaraq conflict. Reports said the Puntland side did not cotton on to the idea enthusiastically demanding that Somaliland must withdraw its forces completely to a point not far from Burao city of Togdheer region – a stand that did not augur well for a dependably strong settlement in the foreseeable future. The result was a blistering retort which put more fuel to the fire with the President telling Mr. Keating that no peace was possible in the circumstances.

The SRSG, on another level, has been very actively pushing for a re-commencement of the faltered talks between Somalia and Somaliland which could have precipitated final decisions on a number of issues at the fore of which would have been future political, security and economic relations between the two sides. If that happened, issues such as that of Tukkaraq would have taken another hue – for good or for worse.

Somaliland is internationally recognized as a de facto state that has, however, fulfill all the trappings of a fully-fledged sovereign state: own flag, currency, passport, bicameral government, strong judiciary wing. In Somaliland, three presidents have changes seats on one-man, one-vote elections – something a tottering government in Mogadishu is yet to achieve despite the huge effort the world has put into it.