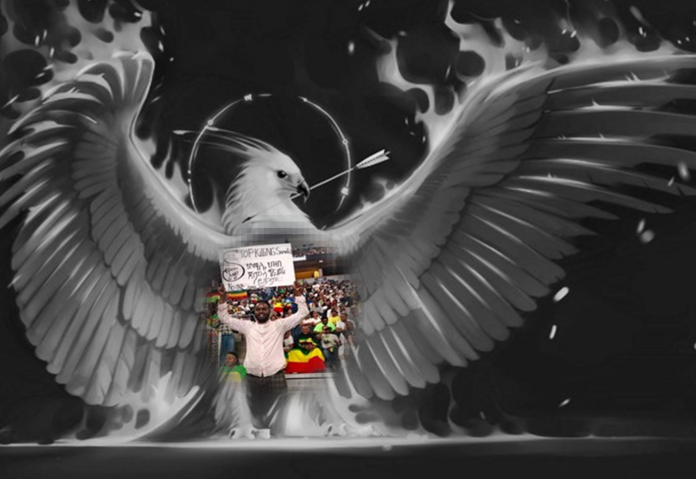 On July 30, 2018, Ethiopia’s populist Prime Minister, Dr. Abiy Ahmed, was welcomed to the city of Minneapolis with a highly publicized and well-orchestrated three-city visit that included Los Angles and Washington DC.  The crowd at the Target Center located in the heart of downtown estimated to hover around 8,000 attendees. The gathering was nothing but a joyous expression of Oromo triumphalism.

A small number of Somalis attended the gathering. Also, an insignificant but recognizable Somalis whose families are killed by Oromo vigilantes called “Qeero,” and local police force from the Oromia region demonstrated in the corridors of the Convention Center.

Of the extraordinarily large crowd, a young Somali man, whose name remained unknown to me until now, stood out like a phoenix rising out of ashes and gallantly defied the norm. He literally challenged the entire crowd and the dignatory at the podium.

Hussein, that is his name, made a small but significant history that will remain with us for a long time? Add some mythology to the mix, and Hussein’s portrait shown below will be a powerful historical icon.

Unfortunately, ONLF cadres ashamedly stood by and clapped hands not for the hero amongst them but for the rhetorical words of the triumphant Prime Minister; they did so even without comprehending a word of his hour-long speech. It was a form of hail to the chief! Most of the Somalis in the crowd, especially ONLF cadres, spoke or understood neither Amharic nor Afan-Oromo, the two languages that served as the medium of communication.

Which prompts one to ask: why would ONLF cadres attend a gathering if they can’t understand what was said? There is only one answer: Somalis hate to be left out when new power shows up in the political scene, and such behavior is historically more prevalent with Somalis under Ethiopian rule.

Most Somalis at the gathering missed the gist of the sermon and the sweet-to-ears words of PM Abiy; yet they never ceased to smile. They simply followed the flock, clapped their hands in unison with the rest, and took pictures.  In other words, this was a perfect scene for what Somalis label “igu sawir,” or “let me take a pic together.” It is when you just take pics with someone to be seen with someone you think to be important. It is a delusional self-importance.

ONLF cadres and other Somalis danced in a celebratory mood. Some even expressed their joy through the famous Dhanto. There, for a moment they resembled their nemesis, President of the Somali region known to entertain Ethiopian authority with a lot of fan and enjoyable Dhanto.

The dignitaries at the podium did not miss the happiness expressed by their Somali subjects. But the Somalis appeared confused and out of place.

At times ONLF cadres inadvertently cheered for a history that was contrary to their historical interpretations of their own struggle for freedom. King Tewedros, Emperors Menilek, and Haile Selassie were honored and praised; and the Somalis still clapped with joy.

Yet, the ONLF cadres intently remained oblivious to the lone Somali.  Most of their attention was purposely focused towards the podium where Dr. Abiy, Lemma Megarsa and their flock agitator, Jawer Mohamed, were seated.

How often does Somalis, especially in the last three decades, stand up to a hostile crowd and a sea of joyous supporters of an ETHIOPIAN PRIME MINISTER and gallantly wave a board carrying a simple but a powerful message? Not often. But that is what Hussein did and that very image left an ever-lasting impression on millions of Somalis?

With bold and all capital letters, the board that defiant Hussein carried read: “STOP KILLING SOMALIS,” followed with a similar message in Amharic. He had hoisted it as high as he could. The now-famous portrait of the young man and his fearless defiant position may not be as vivid as the 1976 Soweto images, nor is it equal in pain to the Soweto youth who hoisted the flag of ANC.

However, the messages and actions of defiant youth share one cardinal value: the propensity to defy powerful rulers and stand up for what they believe, while they remain oblivious to consequences.

In Hussein’s view, the threat to his community was represented by the trio Oromo representatives: PM Abiy, Lemma Magersa and the ultra-Oromo nationalist, Jawer Mohamed.  It was now or never for him.

Unlike ONLF cadres who sung for the trio, this young man’s board read: “STOP KILLING SOMALIS.” He spoke for thousands of Somalis and their surviving families who have been killed in Moyale, Negale, Balbalyti Babile, Tuleguuleed, and Maeso.

In the 1940s, thirteen young Somali men with the nomenclature of the Somali Youth League (SYL) took the colonial powers in all Somali territories by surprise.  In less than twenty years (1960), Somalia was free.

Oromos have seen their own share of heroic young men and women. In 1963, the unexpected announcement of the Mecha and Tulama Association, a social welfare organization to tackle the dismemberment and debasement of Oromos, shocked Ethiopia; this was the first indigenous and grass-root leadership Oromos have produced. Today’s Oromo youth who goes by the nickname of “Qeero” are different; they kill, mutilate and rape, and are not yesteryears Mecha and Tulama Association.

Equally important was when Wallelegn Mekonen, a left-leaning young man, announced in front of high ranking Ethiopian clergymen and crown representatives the existence of an oppressed Somali nation within the unholy Ethiopian empire; with the declaration, Emperor Haile Selassie, or his subsequent rulers of Ethiopia, never had a quiet night since then.

The defiance of, let us call him Hussein Somali, in Minneapolis, has certainly sent shockwaves – which Somali youth all over are taking kudos to defy oppression and subjugation. Millions of Somalis welcomed his message, opened their hearts, and unconditionally agreed with his position to tell the popular Prime Minister “STOP KILLING SOMALIS.”

Prime Minister Abiy and his team conveniently ignored this message both here in Minneapolis and elsewhere.  When a Somali Harari young man asked PM Abiy in Los Angeles why he cannot tackle the massacre of Somalis, Harari, Guji by his base or Oromos, he got agitated and ignored the question.

As if that was not enough, in three consecutive speeches in three different cities, Prime Minister Abiy celebrated the diversity of nationalities in Ethiopia; only one problem: he never failed to ignore one of the most disenfranchised group – Somalis. His posthumous and patronizing band-aid words in a gibberish Somali written in the Giez alphabet does not quite cut it.  Rather, Somalis need a big boy to stop the bloodshed.

In a twist of events, though, the message of Hussein Somali somehow equally offended the cadres of the Ogaden National Liberation Front (ONLF).

When I posted this powerful and historic image on my Facebook wall, ONLF cadres tried to belittle the person; they attacked and accused him of being an agent of DDS and it’s strong but waning and weakened ruler, Abdi Muhumed Omar.

ONLF cadres, most of them young and misinformed and more so about Ethiopia’s complex history, trashed the young hero; they muddied the message expressed on the board with many other unrelated peripheral conversation.

On my part, I found solace in the portrait of this Hussein Somali and right away posted it on my Facebook page, while calling for ONLF to apologize to the Somali people for hoisting its flag to salute the trio who are in the midst of a campaign to kill as many Somalis and grab as many Somali territories as possible.

A defiant stance taken by a proud and daring young Somali man who stood up to his killers and oppressors is just what we need at this time. No one can explain why this heroic message offended ONLF cadres whose charter purports to stand for the welfare of all Somalis.

Faisal Roble, a writer, political analyst and a former Editor-in-Chief of WardheerNews, is mainly interested in the Horn of Africa region. He is currently the Principal Planner for the City of Los Angeles in charge of Master Planning, Economic Development and Project Implementation Division.