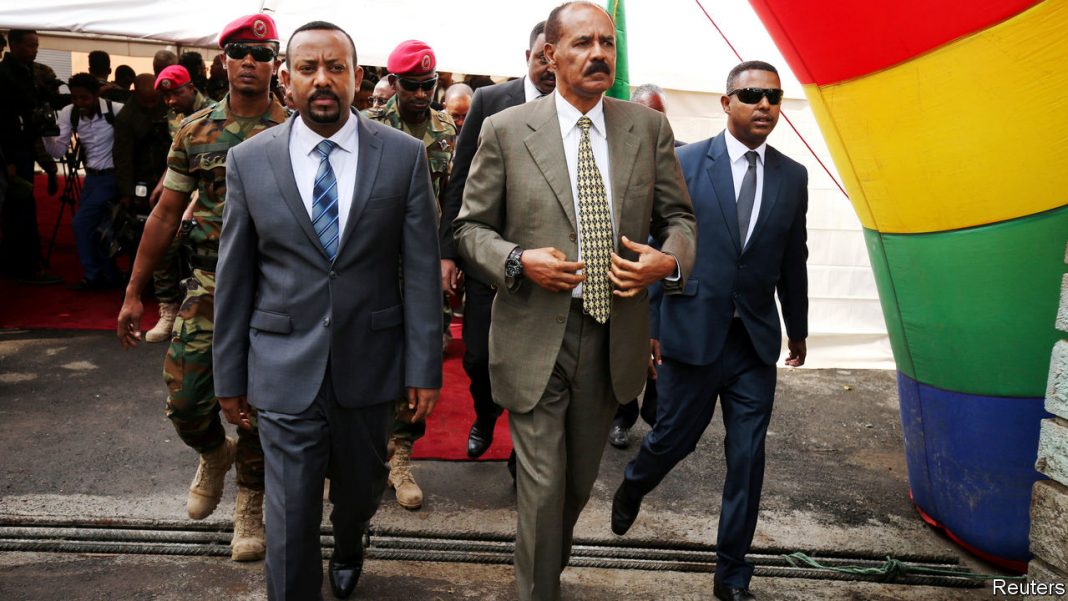 Peace gives Eritrea a chance to open up

SOMETHING good is happening in the war-ravaged Horn of Africa. Eritrea and Ethiopia are making peace. It is as if North and South Korea made friends, not just with platitudes at a summit but with actions on the ground. In recent weeks Ethiopia’s new prime minister, Abiy Ahmed, and Eritrea’s dictator, Isaias Afwerki, have signed a peace deal and reopened telephone and air links between their two countries. On July 30th Eritrea agreed to restore diplomatic relations with Somalia; there is talk of mending ties with neighbouring Djibouti, too.

It is too soon to say what all this means, but the omens in Ethiopia are good. As well as pursuing peace, its new leader has lifted a state of emergency, welcomed back exiled dissidents, freed thousands of political prisoners and vowed to privatise lumbering state-owned enterprises. The big question-mark hangs over Eritrea, the North Korea of Africa.

The Eritrean regime hates being likened to North Korea’s—and it does not have nuclear weapons—but the comparison is unavoidable. Eritrea split from Ethiopia in 1993, after a 30-year guerrilla struggle. The two countries fought a pointless war in 1998-2000 over a desolate border town; perhaps 70,000 people died. Eritrea is ruled by a despot-for-life whose critics wind up dead or sweating in a gulag of shipping crates in the desert. The regime is isolated, mysterious, paranoid, has a history of stirring up trouble in the region and has always used the threat of war as a pretext for oppressing its people. National service is compulsory and indefinite—many Eritreans serve more than 20 years either bearing arms or digging ditches for a pittance. Those who try to flee the country risk being shot. Many bribe border guards to look the other way; hence the large number of Eritreans who have sought asylum in Europe. Isolation, or “self-reliance” as the regime calls it, has kept Eritrea wretchedly poor. Only nine countries score worse on the UN’s human-development index.

Could things be about to improve? As we report from inside Eritrea (see article), the mood is suddenly unsettled. Peace, if it sticks, would remove the regime’s main excuse for its atrocious behaviour. If Ethiopia is no longer a threat, why should Eritreans spend decades doing national service? If Eritrea is no longer on a war footing, why does it need a military strongman to keep it safe? Strange to recall, before it seized power a quarter-century ago, the ruling party promised Eritreans multiparty democracy with all the trimmings, including freedom of speech and religion.

It would be naive after all this time to expect Mr Isaias suddenly to honour that promise. But he could take other steps to make Eritrea less closed and miserable. Most important, he must not go back to war. Progress is virtually impossible without peace. He should also open up to trade, investment and people. Ethiopia is a landlocked giant. Eritrea can give it access to the sea. The war and its aftermath stopped Ethiopian imports and exports from flowing through Eritrean ports, depriving both countries of a fortune. Two-thirds of Eritrean exports used to go to Ethiopia.

And he should abolish all non-military conscription. If the regime cannot bring itself to get rid of military service too it should at least impose a time limit. This would remove the single biggest grievance causing Eritreans to flee their homeland. Some of the dynamic diaspora might even return to help rebuild their country. Ending non-military national service would also remove a huge obstacle to foreign investment. Reputable firms shun Eritrea partly because any venture is likely to involve local partners who use conscripts—ie, forced labour. Without this worry, they might help spruce up Eritrea’s crumbling harbours, woeful telecoms and barely exploited tourist potential. Unshackled from semi-slavery, Eritreans would be free to find or create jobs they actually want to do.

Fleeing from slavery across the Red Sea

It is too early to abandon the presumption that Eritrean refugees have a well-founded fear of persecution. Eritrea will not suddenly become a normal country. But by easing its state-imposed seclusion, it could become a less poor one. Outsiders should encourage that. As and when the regime opens up, the West should begin to engage with it. And some day, perhaps, Eritreans will start to enjoy the freedoms they were promised during their tragic revolution.