The Somaliland police force, today, Thursday, returned a ten-ton truck driven off from a garage in the Eastern suburbs of Hargeisa last evening.

The truck, Plate No. 17560, was owned by the Oomaar International Trading Company (Ominco).

At the time it was driven off at gunpoint from the city garage shortly after sunset Wednesday, the truck was being serviced for minor repairs and was laden with construction materials destined for the eastern region of Togdheer’s capital city of Burao.

According to Major General Abdullahi Fadal Iman, who spoke to the media today, police officers in hot pursuit of the hijackers, supported by Adadley and Sabawanaag units, caught up with the armed robbers 10 kilometres south of Bender Wanaag village,  around 30 kilometres east of Hargeisa.

Following a brief fire exchange with the police, the bandits took off into the night abandoning both the truck and NOAH van they were riding as an escort.

General Fadal thanked the units personally led and directed by the Deputy Commander and Head of Operations. He, also, congratulated the Somaliland public on its profound support of security forces. The Police Commander identified the leader as one Nassir Hassan Ismail, but did not elaborate on why this particular truck was robbed and if the materials it carried was of any significance to the robbers. 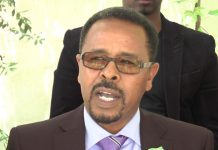