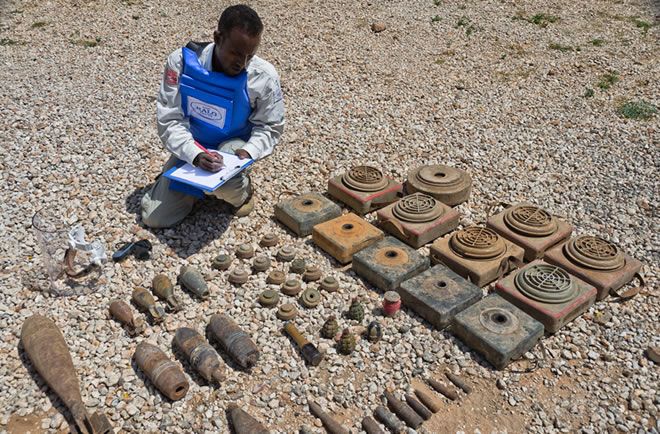 New UK aid funded technology, including radar detectors, will help trace ammunition in the equivalent of more than 16,000 football pitches. Remote controlled machines, such as the Mine Wolf, will also help clear cluster bombs more rapidly.

Manufactured in Newcastle, the eight-tonne Mine Wolf is a remote-controlled mine-clearing machine used in high risk areas. It can clear up to 12,000 square metres a day.

Our support will also help train all-female demining teams, often in areas where many of the men have died in conflict. Hundreds of women from impoverished communities are being empowered through skills training in landmine clearance, vehicle mechanics and paramedic first aid to protect their communities.

“The crippling legacy of fear, mutilation and devastation, which landmines leave, must be wiped out for good.

“UK expertise and innovation are helping to shield vulnerable people from these barbaric relics and liberating land contaminated by these devices. This will allow the poorest people to grow crops, walk their children to school without fear and ultimately give them back control over their lives.

This demining work will protect more than 820,000 people from the threat of barbaric relics across war-ravaged communities in Asia and Africa.

Working in partnership with local authorities, governments and through world-class UK organisations such as The HALO Trust and Mines Advisory Group (MAG), our support will train local men and women to identify and remove these deadly objects. These projects will boost local employment, recruiting men and women from communities where alternative job opportunities are severely limited.

UK support will also help educate a further 280,000 men, women and children about the dangers of landmines, an essential lifeline to safeguard entire communities from mutilation or death.

This latest support is part of a UK commitment made at an event with HRH Prince Harry in April 2017 of £100 million support to make 150 square kilometres of land safe again over a three year period, benefiting at least 800,000 people.

This latest partnership with The HALO Trust, MAG, Norwegian People’s Aid and the Geneva International Centre for Humanitarian Demining is part of the £100 million commitment made last year and will support demining efforts across nine countries including:

Over twenty years after Princess Diana’s iconic walk through a landmine littered field, Angola still remains one of the most heavily contaminated countries in the world. Towns remain isolated due to mine threats and people are unable to return to their homes or farm land. UK support will enable communities to build houses on safe land, provide safe passage to schools and allow land to be used productively for farming.

Laos remains plagued by high levels of unexploded ordnance and has some of the highest landmine casualty rates in the world. More than 40 years since the Vietnam conflict ended, contamination prevents communities from fully utilising their land which they depend upon to feed their children and earn a living. UK support will help make land safe for cultivation and hand back control to these often marginalized communities.

South Sudan’s crippling civil conflict has led to widespread contamination, with mines and brutal cluster bombs, blocking access to fertile land that many rely on to make a living. UK support will help ensure all hazardous areas in Terekeka State will be cleared of mines by the end of 2020. If successful it will be the first state to achieve this status. Thanks to UK taxpayers’ contributions, land will be returned to impoverished local communities allowing them to farm again and feed their families.

Photos and B roll footage of the latest technology being used to clear mines, female deminers, and general footage of wider demining work can be found here

This £46 million support from the Global Mine Action Programme 2 is a new allocation from the existing £100 million announced last year. It will be delivered through The HALO Trust, MAG, Norwegian People’s Aid and the Geneva International Centre for Humanitarian Demining. Through DFID’s support, HALO & MAG will lead mine clearance, mine risk education and capacity development in Angola, Cambodia, Somalia, Zimbabwe, Burma, South Sudan, Laos, Lebanon and Vietnam.

DFID funding to HALO and MAG will provide support to National Mine Action Authorities (NMAAs) to help affected countries better manage their own response to contaminated land. This will ensure they have the skills and knowledge to regulate, coordinate and manage mine action more effectively, with minimal outside financial support. As well as building self-sufficiency, the projects will centre on local employment, recruiting staff from affected communities where alternative employment opportunities are limited.

Of the £100 million announced last year to tackle landmines across the globe, £95 million has already been committed to projects including:

In addition to this, through UK Aid Match, the UK Government matched pound for pound £214,000 of public donations to MAG’s demining ‘Walk Without Fear’ appeal. This doubled the impact and helped return land to almost 8,000 people in Angola.