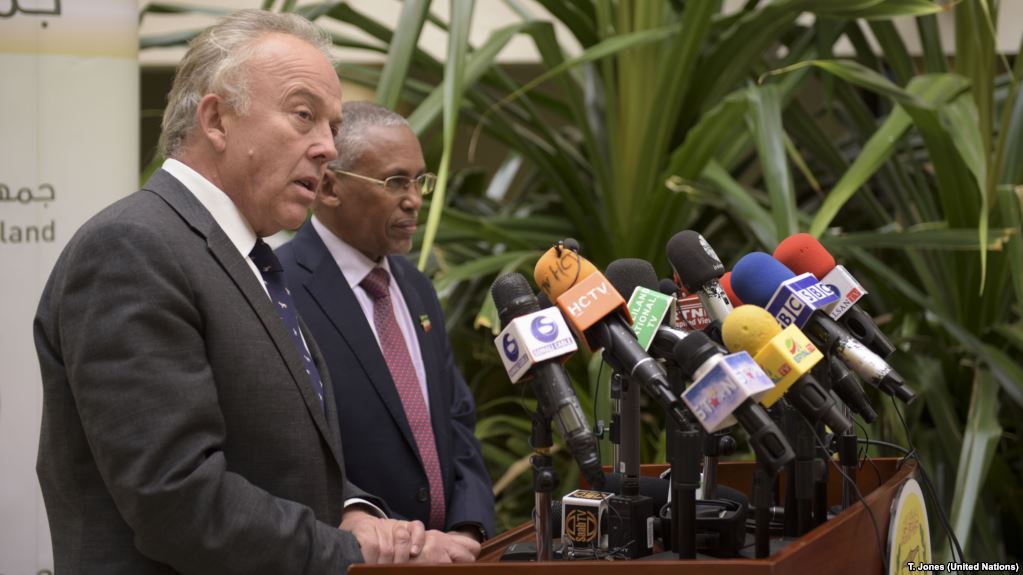 United Nations Envoy to Somalia Michael Keating says lack of trust among Somali leaders is complicating progress on the political and security fronts, and says the country’s federal and regional leaders need to compromise.

Keating, who is leaving the office October 1, says there has been progress on the technical level in terms of agreeing on national security structure, transition plan and approach to security but says there is a “political problem” that is not allowing things to move forward.

“Where I think there remains a problem is building political trust in the country’s leadership at a time when elections are approaching,” he told VOA Somali.

He called for compromise and warns that lack of it will worry the international community and Somali partners.

“If they can reach compromises on certain things then that will bring benefits for all Somalis and the investment that the international community is prepared to make in Somalia,” he said. “But the best way to worry international actors who want to invest in Somalia’s future is to show that politicians cannot reach basic agreements and therefore make them worry about whether this technical agenda, which is a good one, can actually be implemented.”

He says the decision “reflects some of the structural problems that underpin Somali politics.” He says power-sharing and the relations between the federal member states and the federal government and allocation of resources is the key sticking point at a time when the provisional federal constitutional that could have separated powers and responsibilities for the stakeholders is under review process.

The five regional leaders of Puntland, Jubbaland, Southwest, Galmudug and Hirshabelle cited “interference” by the federal government and lack of sharing of foreign aid for their decision to suspend cooperation.

Somalia’s president, Mohamed Abdullahi Farmajo, has invited the five leaders for a meeting September 17 and 18, but there is a doubt whether some or all the regional leaders will attend.

“I think it’s unfortunate, I hope it will quickly result in a course-correction where by the federal member states will agree to meet with the president,” Keating said. “He issued an invitation. … The main thing is that the leaders of the country get together very quickly to discuss issues of common concern, and the most important ones right now include security, the constitutional review, the electoral process, and of course revenue and resources.”

He warned that the lack of trust among the leaders could get more complicated as regional and national elections approach.

Elections for the five regional leaders are expected to take place within the next 18 months, starting with Southwest, which elects its leader in November, followed by Puntland and Jubbaland in January and August next year, respectively. But as leaders prepare for elections, federal leaders also are concerned about possible parliamentary motions at federal level against their seats. Keating says money changes hands during these process and further exacerbates political frictions.

“Unfortunately too much money changes hand in order to win votes, in order to either support or stop motion of no-confidence or impeachment, and this is a complicated game but one that is not allowing the country to move forward,” he said.

He said he has urged Somali leaders to come up with a reform around rules of no-confidence and impeachment motions, as well as finance reform.

“There also needs to be rules about the use of money in politics,” he said. “We need to have more safeguards against just politics being reduced to exchanging money to achieve political outcomes.”

Asked where the money is coming from, Keating says it’s “untraceable.”

“Even though Somalia remains one of the poorest countries in the world there is still a lot of money floating around and it comes from multiple sources,” he said.

Keating praised the efforts by the prime minister to reform Somalia’s economic and financial systems under the monitoring of the International Monetary Fund that he says is bringing “real and positive change” in terms of increasing domestic revenues and taxation.

Keating strongly urged Somali leaders to take the lead in solving problems in their own country.