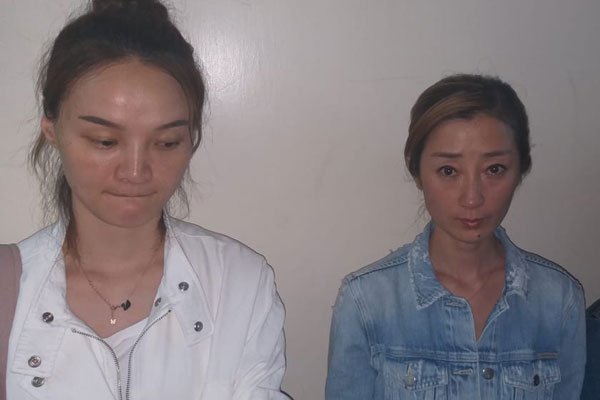 Immigration Department says its officers have arrested 15 Chinese nationals for allegedly engaging in prostitution in Nairobi.

The suspects, who were allegedly found in a brothel, in South C estate were taken to Jomo Kenyatta Airport for processing and subsequent deportation.

Their arrest comes months after Interior Cabinet Secretary Fred Matiang’s declared war on illegal immigrants and foreigners doing jobs that should be done by Kenyans.

The Chinese embassy in Nairobi has complained over police swoops that have seen its nationals with legal documents hauled into police stations for verification.

Police on Wednesday raided the African headquarters of the China Global Television Network, briefly detaining several journalists as part of an ongoing crackdown against illegal immigrants.

The Inspector-General of Police Joseph Boinnet confirmed the raid on the office in search of foreigners working in the country illegally.

He said 13 Chinese nationals were arrested and immediately released after their work documents were verified.

CGTN, an international English-language television station, broadcasts across the globe, with major news centres in Nairobi and Washington.

Following the raid, the Chinese Embassy issued a statement condemning the arrest of their citizens by Kenya police.

The consulate said Chinese nationals who hold legal residence and working permits should not be detained.

“The Chinese Embassy in Kenya always requires the Chinese companies and individuals to abide by the local law, stay and work legally in Kenya.

“The Chinese Embassy respects the legal acts of Kenyan police. However, the Embassy deems that the Chinese nationals who hold legal residence and working permits should not be detained,” the consulate said.

China financed 90 per cent of the new railway linking Nairobi to Mombasa.

President Uhuru Kenyatta, attending a two-day China-Africa forum in Beijing, is expected to sign a deal for the financing of the second phase of the railway, which will link the Rift Valley town of Naivasha to Kisumu near the Ugandan border

The Immigration department began a crackdown against foreigners working in the country illegally in May.

More than 100,000 foreigners are targeted in the countrywide operation, which was launched by Interior CS Fred Matiang’i.

Last week, the interior ministry released a hotline number for members of the public to report illegal immigrants.

“It is extremely worrying that citizens are being encouraged to call a hotline to report cases of suspected undocumented migrants. This approach is likely to ignite xenophobia against foreign workers, refugees and asylum seekers,” Amnesty International’s regional deputy director Seif Magango said in a statement on Saturday.