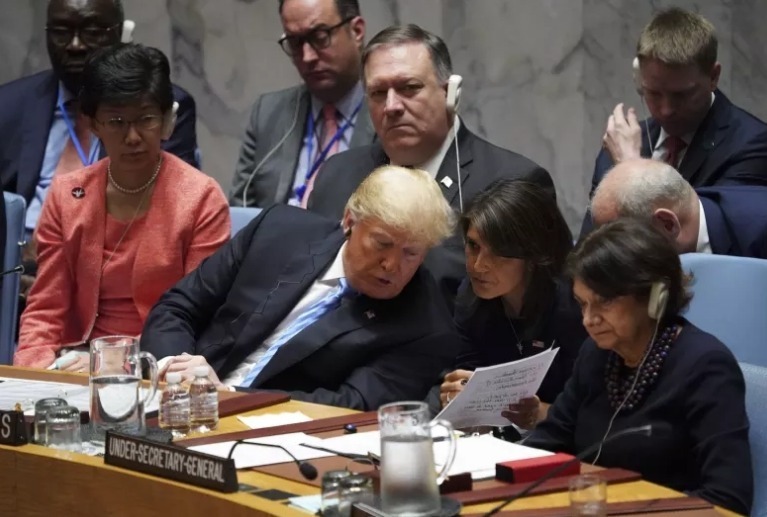 Donald Trump’s speech to the UN was met by widespread laughter, and diplomats have confirmed that their delegations were laughing at — not with — the US president.

“Sometimes, when we see a behavior or listen to arguments or notions that seem so far-fetched, unreasonable, or insane, there is almost natural reaction of laughing,” one Latin American diplomat said, speaking anonymously so he could speak freely.

The diplomat added, “It is not laughing at a good joke, but a nervous laugh, or a bad joke turned laughable precisely because the guy who tells the joke doesn’t realize how bad it is.”

Laughter filled the UN General Assembly room on Tuesday after Trump said his administration “has accomplished more than almost any administration in the history of our country.”

On Wednesday, Trump argued during a news conference that “they weren’t laughing at me, they were laughing with me.”

“We had fun,” Trump said. “That was not laughing at me. So the fake news said ‘people laughed at President Trump.’ They didn’t laugh at me, people had a good time with me. We were doing it together, we had a good time.”

Trump’s comments came after Nikki Haley, the US ambassador to the United Nations, said in an interview earlier Wednesday that those in attendance were laughing because they “loved his honesty” and stressed that the diplomatic community respects the president.

But diplomats themselves described the speech as awkward and out of place.

“His words in the opening part of the speech were clearly addressed to [a] domestic audience,” wrote one European diplomat in a message that noted that other world leaders do the same. “But as he did it in the Trumpian way (bragging ridiculously about being one of the best administrations in history) people in the audience reacted how they reacted.”

“What would resonate well at a political rally in America sounded a little awkward at the UN General Assembly,” the diplomat added.

Trump used the speech on Tuesday to hail the importance of sovereignty over multilateralism and to bash those countries that might stand in his way — all while appealing to his own American electorate.

“He doesn’t have any concept of diplomacy,” one Asian diplomat said, though the diplomat added that Trump’s undiplomatic diplomacy has “worked well toward North Korea.”

Trump’s chairing of a UN meeting on Wednesday morning was not met with laughter, but with confusion. The US president did discuss the ostensible subject of the meeting, touching on the Iran nuclear deal and North Korea. But he also veered into distinctly non-nonproliferation territory, accusing China of meddling in the upcoming midterm elections, while offering no proof.

“They do not want me or us to win, because I am the first president to challenge China on trade,” Trump said. “And we are winning on trade. We are winning at every level.”

It was the kind of tangent that would seem completely normal at a Trump rally. But at the highly scripted Security Council, it was distinctly out of place.

The camera panned to the Chinese delegation, the members of which appeared to shrug.

The Chinese Embassy in Washington, DC, did not immediately respond to a request for comment on the substance of Trump’s speech, or on whether the shrug was an intentional reply.

But the Chinese shrug encapsulated a tension that’s been on display this week as member nations‘ top officials gather to debate world events. The United Nations, home of diplomacy and decorum, is unfamiliar with the sort of brash braggadocio that’s considered par for the course for Trump.

When Trump focused part of his Tuesday address on Germany and warned that “Germany will become totally dependent on Russian energy if it does not immediately change course,” the German delegation was caught smirking on camera.

That was “scornful laughter, not nervous laughter. But there is a deeper point here: World leaders have worked out that trying to reason with Trump does not work. Trying to attack him often backfires. But laughing at him can defuse his attacks,” said Richard Gowan, a senior fellow at United Nations University.

Can Somaliland Be Alternative for Russia’s Troubled Sudanese Naval Base Plans?