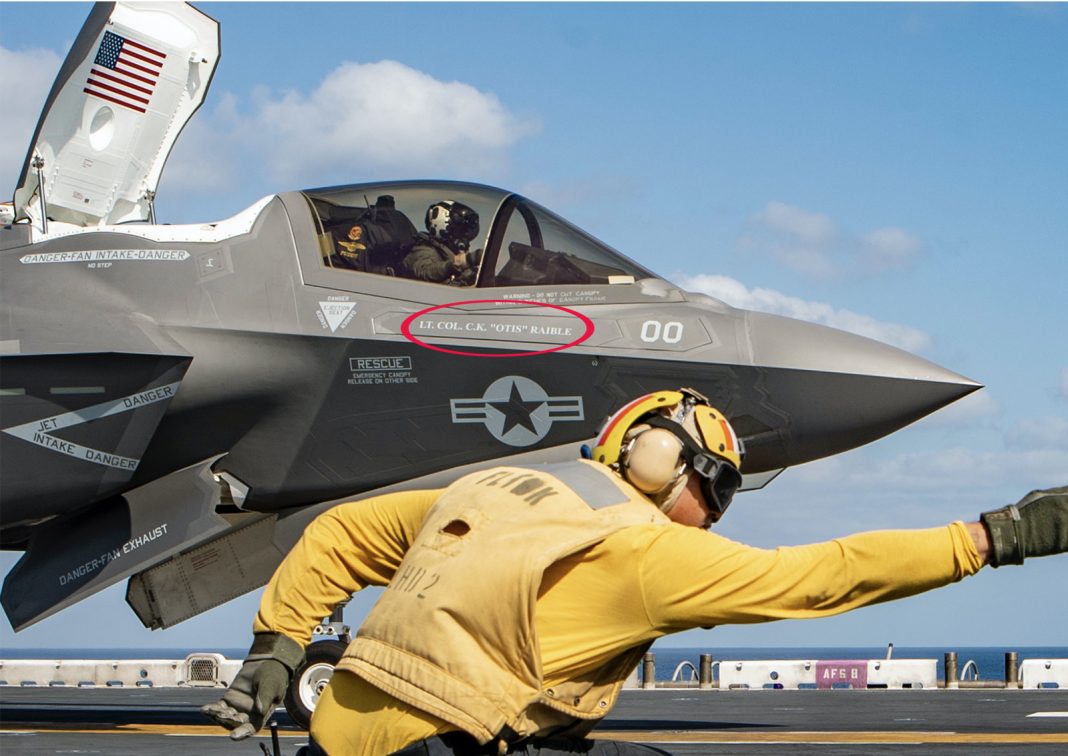 According to a story published late Tuesday, October 2, 2018 in the Marine Corps Times by journalist Shawn Snow, “Later that afternoon, photos of the historic feat published to the Defense Department’s imagery website displayed the name of a [deceased] squadron commander on one of the F-35Bs, who was killed in an infamous attack on Camp Bastion, Afghanistan, in September 2012.”

Snow went on to write that, “Lt. Col. Christopher Raible’s name appeared near the canopy of an F-35B prepping for the strike on the deck of the Wasp-class amphibious assault ship Essex. Often it’s a current pilot in the squadron whose name is on the plane.”

The USMC F-35B Lightning II shown in the photo from the Monday, September 27, 2018 strike in Afghanistan was named to honor the memory of USMC Lt. Col. Christopher Raible and his remarkable story of heroism while commanding the very same unit that flew this historic first U.S. F-35 strike.

In response after insuring the safety of his Marines Lt. Col. Raible, armed only with a sidearm, hurried to the area of the attack. Lt. Col. Raible determined the well-organized insurgent force had split into three groups: two tasked with destroying Marine AV-8B Harriers and the third group moving to kill U.S. Marines in their sleep.

Lt. Col. Raible ran 100-yards across open area under insurgent fire and rallied a group of aircraft maintenance personnel to mount a counter attack against the insurgents. Armed only with a handgun, Lt. Col. Raible’s swift, aggressive action temporarily stopped the Taliban insurgent attack and enabled Marines to organize an effective counterattack that lasted over four hours. The counterattack by Marines eventually neutralized the infiltrating insurgents after they had destroyed six AV-8B Harriers. Unfortunately, Lt. Col. Chris Raible and Sgt. Bradley Atwell were killed during the counter-offensive. It was also the greatest loss of U.S. Marine aircraft since the Vietnam War.

A U.S. Marine Corps AV-8B Harrier sits on the flight line at Camp Bastion, Helmand province, Afghanistan Sept. 26, 2012. The Harrier was one of six relocated to Camp Bastion to increase the overall readiness level of Marine Attack Squadron (VMA) 211 and is painted in memory of Lt. Col. Christopher K. Raible and Sgt. Bradley W. Atwell, who were killed during an attack on Camp Bastion Sept. 14, 2012.

One Marine wounded during the attack later told a reporter about Lt. Col. Raible’s gallantry, “My commanding officer never feared death and would want us to keep fighting. That’s what he would do.”

Lt. Col Chris “Otis” Raible’s name painted on one of the F-35B strike force aircraft in last week’s historic raid served to avenge his death and memorialize his heroism.

USMC Sgt. Bradley Atwell and Lt. Col. Chris Raible were both killed in action in Afghanistan in 2012. (Photos: U.S. Navy)

Finally, some observers of last Monday’s first U.S. F-35 Joint Strike Fighter combat mission have speculated about the reasons for using USMC F-35B Lighting IIs. The aircraft launched from the Wasp-class amphibious assault ship USS Essex in the Arabian Sea and flew a significant distance to strike their targets. But this has been pretty common: U.S. Navy aircraft launching from aircraft carriers in the Persian Gulf or in the Indian Ocean off Pakistan have supported Operation Enduring Freedom in Afghanistan for decades now.

At least two aircraft, modex CF-00 and CF-01 made a stopover in Kandahar Air Field after the air strike before returning to the aircraft carrier.

The two F-35B taxiing at KAF the day after the type’s first ever air strike in Afghanistan. There’s a blimp (most probably a Joint Land Attack Cruise Missile Defense Elevated Netted Sensor System – JLENS) in the background.

The aircraft carried the external gun pod along with the two upper Luneburg lenses/radar reflectors.

Actually I meant that lenses + gun pod is standard for CAS in Afghanistan and Horn of Africa based on photo evidence. I’m not sure of the RCS penalty induced by the pod so I’m not sure the lenses are always carried tbh.

Dealing with the radar reflectors, it’s pretty obvious that they were carried because there is no need to hide from any Taliban radars over Afghanistan.

Our own Editor David Cenciotti has observed that,  during normal peacetime activities, the F-35B uses two radar reflectors in the upper rear fuselage and one centerline in the lower rear fuselage. However, when it carries the external GAU-22 gun pod, the aircraft sports only two upper side radar reflectors. We have not found any image showing the aircraft with the external gun pod and without the Luneburg lenses.

Anyway, capabilities unique to the F-35 Joint Strike Fighter include greatly enhanced situational awareness and information sharing through the aircraft’s Multifunction Advanced Data Link (MADL). The MADL allows sensors on the aircraft to relay real-time intelligence to other assets including aircraft and ground forces, enabling them to work in the same informational space. While some version of this capability has been available with previous targeting pods and sensors, it was not designed-in and has not approached the intelligence gathering and sharing capability of the F-35s sensor and communications suite.

Two U.S. Marine Corps F-35B taxi to the runway at KAF the morning after conducting the first air strike in Afghanistan.

In the dynamic insurgent conflict in Afghanistan very small targets are difficult to locate, move quickly and disappear easily. The F-35’s enhanced sensors and ability to immediately share dynamic intelligence across a wide spectrum in all conditions must be key to maintaining situational awareness and providing accurate targeting.

It’s possible the F-35Bs were tasked with this mission in Afghanistan, because they could share intelligence data in real-time with ground forces in both directions and “see” the targets better than any previous strike aircraft rather than because they are stealth (indeed, the presence of the radar reflectors shows they were exploiting Low Observability).

Feature image: One of the USMC F-35Bs from the USS Essex carried the name of USMC Lt. Col. Christopher Raible who was killed in action in Afghanistan in 2012. (Photo: U.S. Navy)