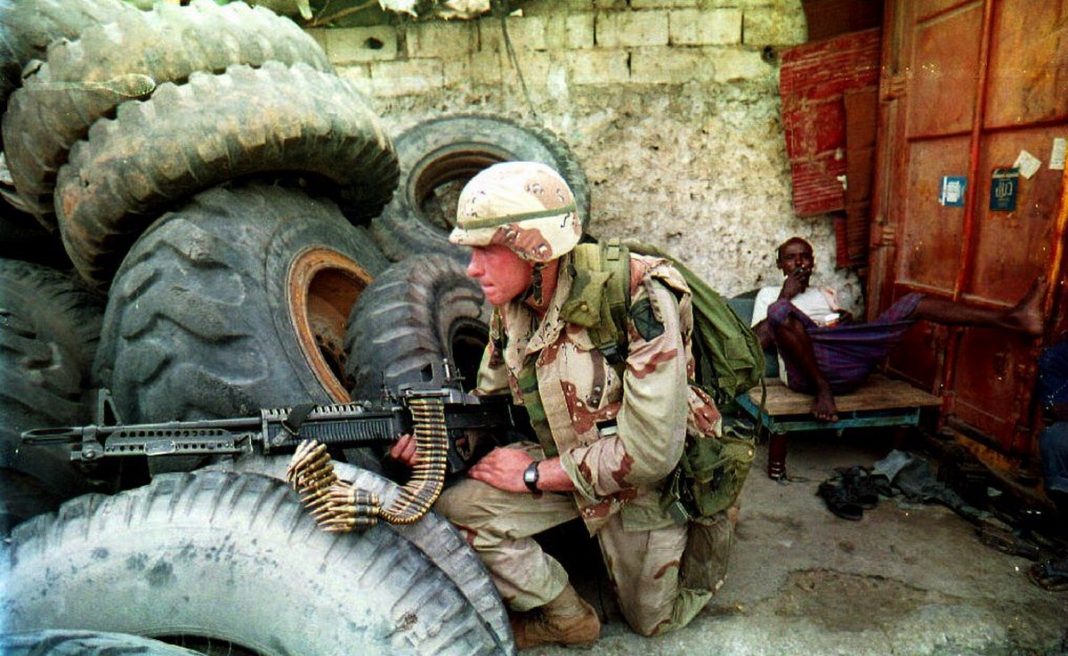 Twenty-five years ago, news flashed across television screens that U.S. troops had engaged in some of the most intense urban combat since Vietnam and suffered more dead and wounded in a matter of hours than recent years of operations combined.

The Battle of Mogadishu on Oct. 3-4, 1993, in Somalia would later be viewed as a tactical success in which, despite daunting odds and unforeseen mishaps, a force of about 100 Americans held off more than 1,000 enemy who poured streams of small arms and rocket attacks in an intense, coordinated ambush.

U.S. forces had arrived in the war-torn country in 1992 on a humanitarian mission to get food to starving people in a city where resources were controlled by various warlords. One of those warlords, Gen. Muhammed Farah Aideed, had directed forces that conducted attacks on U.N. allies, killing dozens, and also a bombing in August 1993 that killed four U.S. military police officers.

Those attacks changed the mission, dubbed Operation Gothic Serpent, for Task Force Ranger to begin focusing on raids to capture Aideed and his top commanders. Those raids, initially the kind soldiers train for routinely, erupted into a crisis when militiamen downed two Black Hawk helicopters using rocket propelled grenades. The 15-hour battle that ensued left 18 Americans dead and 73 injured. And shocking images of American soldiers dragged through the streets of Mogadishu were seared into the memories of many Americans at home.

The book by journalist Mark Bowden and later the movie “Black Hawk Down” chronicled the battle in harrowing detail, memorializing it and contributing to its enduring legacy in both military and civilian circles.

Though the Army Rangers, Delta Force operators, 10th Mountain Division soldiers and other service members who took part in the fight would be recognized for their heroism, the battle signaled the end of Operation Restore Hope in Somalia and was characterized by many as a strategic failure.

U.S. forces would go on to perform multiple humanitarian and peacekeeping missions for the rest of the 1990s, but military and civilian leaders were careful to avoid such intense combat and losses. The lessons learned by the special operations forces echoed into the post-9/11 era and continue to resonate to this day.

Lt. Gen. Fran Beaudette, head of U.S. Army Special Operations Command, told Army Times that the sacrifices and bravery of those who fought in Mogadishu are reminders of the “professionalism, cohesion and valor of our forces.”

The wreckage of a jeep burns in a Mogadishu street Oct. 3, 1993, after it was destroyed by a remote controlled bomb, injuring three U.S. service members. (AFP via GettyImages)

Beaudette was not in Mogadishu at the time but had submitted his Special Forces selection package just prior to the battle and recalled trying to piece together what had happened with friends and colleagues from his conventional infantry unit.

“The battle reinforced my decision to join [Army special operations forces], and I doubled down on my training and prep,” Beaudette said.

He would later benefit from others’ experience from that battle when he arrived at his Operation Detachment-Alpha team and met his team sergeant, Rick Lamb, a Mogadishu veteran.

The three-star called Lamb “one of the finest leaders” he’d ever served with in his career.

The current commander of the 75th Ranger Regiment, Col. Brandon Tegtmeier, was a cadet at West Point during the operation. One of his instructors during Ranger assessment and selection was a veteran of the battle.

A quarter century later, the heroism and bravery of the men who fought that battle continue to inspire current troops and Tegtmeier said today’s Rangers “strive to emulate them.”

Tegtmeier echoed others in how the lessons learned from the battle only serve to reinforce the fundamentals of combat training. But, he added that it also underscores the importance of building interoperability between forces before the fight.

And beyond the standard warfighting skills, Mogadishu emphasized the importance of the human terrain and the challenges of the counterinsurgency mission, he said.

After 9/11, as the Global War on Terror unfolded nearly a decade later, several Mogadishu veterans were in key positions of leadership in the ranks.

“They hammered home to us the criticality of being comprehensively ready, how being an expert in the basics was fundamental, and how personal and professional discipline, especially in combat with our indigenous partners, was paramount to success,” Beaudette said.

Individuals interviewed, and multiple case studies of the battle repeat that same takeaway — realistic training and repetition to the point of mastery were crucial.

“The Ranger Regiment’s ability to learn from the tactical lessons of Mogadishu was absolutely critical in preparing us for combat in Afghanistan and Iraq, particularly in the early years of the conflicts,” Tegtmeier said.

Command Sgt. Maj. Reese Teakell was still a teenager when he deployed with 3rd Ranger Battalion to Somalia. Some of his noncommissioned officers had combat experience from operations in Grenada or Panama, but many had never seen a firefight. But they had all been brought up by the Vietnam generation, who drilled into them the importance of rigorous training.

“There was a warrant officer who told me this: He said, ‘Hey, make sure you’re ready to go. Nobody improves in a firefight. You go into the firefight with the skill and knowledge you’ve trained with,’ ” Teakell said. “Don’t use the time you have to prepare lightly.”

It’s easy for current soldiers to see the past two decades of near-constant deployments as the norm. But for troops from the late 1970s until the late 1990s, actual combat operations were rare and brief.

Retired Army Maj. Larry Moores at the time counted himself lucky ― or unlucky, if you asked his mother, he said.

He had deployed to Grenada but missed Panama because he was in Officer Candidate School. He later deployed to Somalia, Haiti and then Afghanistan before retiring.

A year after Somalia, his unit, Bravo Company, 3rd Battalion, 75th Ranger Regiment, was one of the few with combat experience to share with troops then headed to Haiti.

Though many of the fundamental skills remained the same, some training and operational tactics changed immediately.

Moores noted that for both Haiti and later Afghanistan, Rangers flew into areas from ships offshore for raids rather than establishing ground bases in or near large cities, such as in Mogadishu.

A 2002 paper on Mogadishu by Maj. Christopher Forbes at the U.S. Army Command and General Staff College, titled “In order to win, learn how to fight: the U.S. Army in Urban Operations,” noted that lessons learned included focus on marksmanship, physical fitness, battle drills and medical training.

After Mogadishu, Rangers added more close-quarters combat training to their marksmanship drills and strove to have every Ranger certified as a combat lifesaver since the ratio of troops to medics was 48-to-1.

They also found problems with planning for contingencies. The Mogadishu raid was expected to be a one- or two-hour operation, so many soldiers brought only a basic ammunition load, no night vision goggles and one canteen of water.

Even commonly trained tactics such as “stacking and moving” along walls in the urban area proved “extremely perilous,” Forbes wrote.

A larger tactical shortfall, though, was more due to operational or even strategic miscalculations. The Rangers had no armored vehicles, and even their Humvees lacked firepower beyond .50-caliber machine guns. They had no grenade launchers, and due to the civilian-packed urban terrain, fire support was limited to close-air support from helicopters.

High level plans lacked thorough analysis, noted another study out of the Combat Studies Institute Press, titled “Understanding the ‘Victory Disease’ From the Battle of Little Bighorn to Mogadishu and Beyond,” by Maj. Timothy Karcher.

Karcher points out that Task Force Ranger had six times conducted missions using similar tactics to those used in the Battle of Mogadishu before the incident. That established a pattern that enemy forces could recognize and exploit.

“If you use one tactic twice, you should not use it a third time, and the Americans already had done basically the same thing six times,” a Somali militia commander told the Washington Post after the battle.

Even to date, only a handful of battles over the past two decades even come close to matching the sustained intensity of that 15-hour fight in Mogadishu.

Most enemy contact in recent years has been through improvised explosive device attacks or short-term ambushes that last minutes before adversaries retreat.

Teakell points out that Mogadishu was an ambush that went “on for hours.”

In those situations, the defending force is designed to lose.

But that wasn’t the case in Mogadishu.

“The circumstances were seemingly to the enemy’s benefit,” Teakell said. “We not only fought through it, we stayed to take care of our people.”

He was shoved into the driver’s seat in his vehicle convoy. A turret gunner was killed early in the ambush and immediately replaced by another soldier who was then shot in the leg.

Those are lessons he still carries with him now as the command sergeant major for the 3rd Brigade Combat Team, 82nd Airborne Division.

“What does it take to have a team that can not only survive that level of contact, but also persevere in it?” he said. “That’s a lesson for any formation, how to build a team with those kinds of people, soldiers, leaders.”