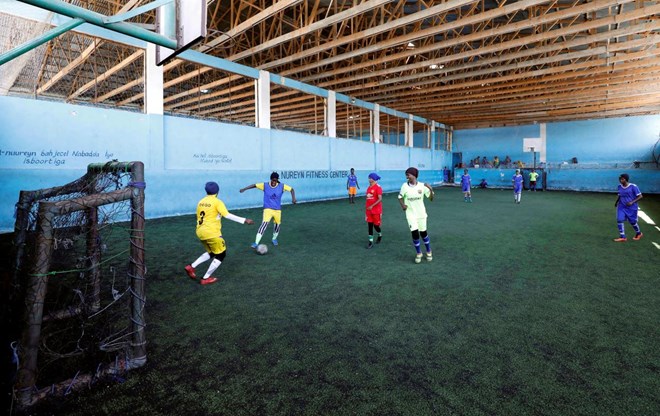 On a tired artificial pitch near a Mogadishu street that has been hit with a series of explosions, Shaima Sallal Mohamed is tackling the stereotype that soccer in Somalia is only for men.

The football fan is player and coach of the all-female Golden Club, which she founded after spending a fruitless year trying to find a place to play when she returned home from Kenya in 2015.

“In Somali culture, women are not allowed to play football,” the 24-year-old Mohamed told Reuters.

“The society does not believe that women can participate in general sports. There is only one or two basketball women teams. Same with handball. Women are not encouraged to play.”

Mogadishu has over one hundred private soccer fields that are hired out day and night to amateur male teams. Mohamed said many were off limits for her two teams of mainly 16-18-year-olds, who play for two hours every day at a cost of $14.

Their venue, located behind hotels on the main Maka al Mukaram street, has rusting goal posts, tangled nets, paint peeling off the walls around the pitch and an uninviting iron sheeting roof.

“We could not get fields to play because women are discriminated (against),” Mohamed said.

“We have a very small field. In the future we want to represent Somalia as a national team,” she said, adding that neither the government not the football federation has offered support.

Mohamed, who played football at high school in Kenya, also helps her team by providing basic kit, balls and cones. She organises fund raising events to help cover the costs.

“Families do not support the girls team. So I give them sports clothes. This makes them happy. Some families cannot afford to help them,” she said.

However, her efforts aren’t always appreciated.
“My parents do not allow me to play football but I love playing football,” said Hodan Mohamud Ali, who joined one of Golden Clubs’ two teams in January despite her family objecting.

Another player, Nimco Cali Osman, said her family supports her decision to play football, but others don’t.

“I face challenges. People insult me. They say to me: ‘You are a woman, why do you play football?’.

“But a woman should not stay at home only, it depends on the ambition of the person. My parents support me.”

Mohamed’s next aim is to take the Golden Club international.

“We want to go to Nairobi, Kenya and see how we can play. And in December, we want play with international teams on women’s rights day,” she said.