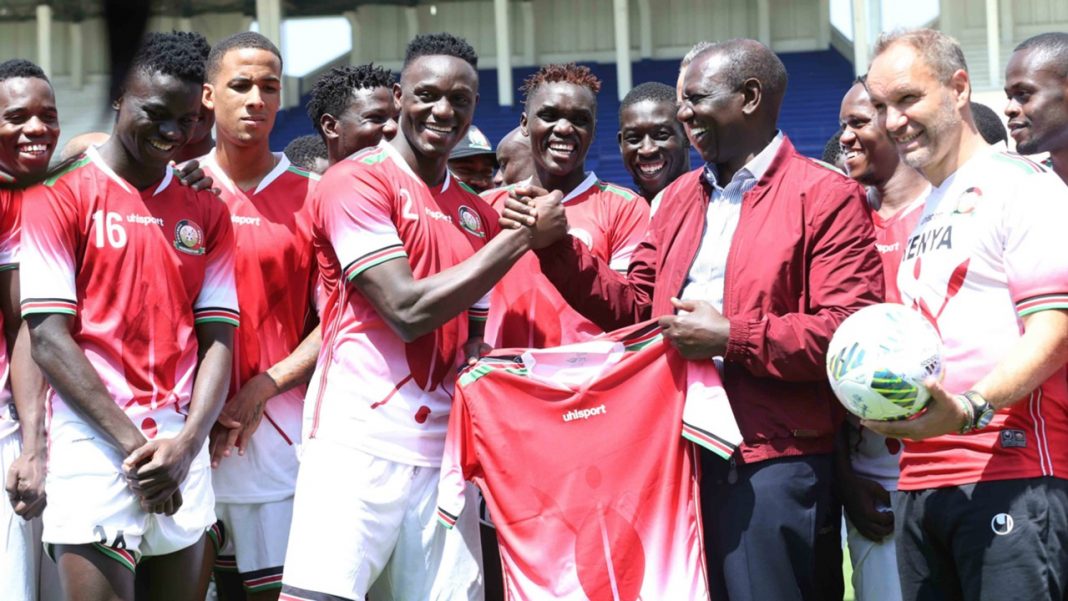 Harambee Stars are now top of Group F with seven points ahead of Ethiopia, who have four while Ghana’s Black Stars are on three

Tottenham Hotspur have congratulated Victor Wanyama after he helped Kenya beat Ethiopia in the Afcon qualifier on Sunday.

Wanyama inked his name on the scoresheet after he converted from the spot in Harambee Stars’ 3-0 win over Ethiopia. The win consolidated Kenya’s lead in the Group F that also has Ghana and suspended Sierra Leone.

🇰🇪 Congratulations to captain @VictorWanyama who was on the scoresheet in Kenya’s 3-0 victory over Ethiopia in today's #AFCON qualifier. 👏#COYS pic.twitter.com/MvBzz5ojiW

Wanyama, was, however, substituted late in the second half after the Spurs midfielder picked what looked like a hamstring injury on his left thigh.

Michael Olunga gave Kenya the lead in the first half before Eric Johanna doubled the advantage with a ferocious shot from outside the box. The win took coach Sebastien Migne’s unbeaten run to three games in the ongoing qualifiers.

Kenya are now top of the Group with seven points ahead of Ethiopia (4) while Ghana has three points, same as Sierra Leone. Kenya took a major step towards the 2019 Africa Cup of Nations as they beat Ethiopia 3-0 at the Moi International Sports Centre in Nairobi on Sunday.

Japan-based striker Michael Olunga broke the deadlock in the 23rd minute with a wonderful volley from the right-flank after he was set up by Erick Omondi, who then got his name on the scoresheet five minutes later with a rocket of a goal from the edge of the box.

Victor Wanyama made it 3-0 in the 67th minute from the spot after Omondi was fouled inside the penalty area, although the Tottenham Hotspur man later hobbled off with what look like an hamstring problem.

The win stretches Kenya’s lead at the top of Group F to seven points. Ethiopia is second with four points while Ghana and Serra Leone are third and fourth respectively with three points each.

Sierra Leone are currently suspended by FIFA and, if the world football governing body doesn’t reverse the suspension, Kenya would definitely take their place in next summer’s showpiece, leaving Ethiopia and Ghana to battle it out for the other slot.

Backed by their fans in the fully packed stadium, the Harambee Stars started the game strongly, looking to get an early advantage.

Erick Ouma and Omondi on the flanks were particularly impressive as they looked to create early chances for marksman Olunga, however good defending from Ethiopia thwarted their attempts.

The first real chance of the game fell to Ouma in the seventh minute, but the Sweden-based defender could only shoot wide with Ethiopia keeper Samson Asefa off his line.

Four minutes later, Ethiopia had their first chance of the game, but captain Getaneh Kebede couldn’t keep his snapshot on target. Shemeles Bekele had a chance in the 16th minute from a free kick but couldn’t trouble Kenya keeper Patrick Matasi.

Against the run of play, Kenya took the lead through Olunga in the 23rd minute.

A quick interchange of passes between him and Omondi set up the Kashiwa Reysol man, who unleashed an unstoppable volley that was deflected on its way past Asefa.

Ouma’s cross from the left wing was poorly cleared by the Ethiopian defence, and the Sweden-based midfielder was rightly placed to find back of the net with a screamer.

Kenya continued dominating the game in search of more goals. Ouma, Olunga and Omondi looked lethal in attack, while Dennis Odhiambo and Wanyama provided stability in the middle of the park.

Ethiopia defender Dawa Hotessa nearly beat his own keeper just before the break, but his miss-kick was cleared from the line before he recovered to clear the danger.

Olunga had two quick chances to stretch Kenya’s lead after the break.

The first came in the 46th minute but his shot from range was saved by Asefa. Four minutes later he lost his footing after going past Asefa and Ethiopia cleared the danger.

Omondi was having his best game in Harambee Stars shirt, and in the 66th minute he won a penalty which Wanyama converted, before limping off with an injury.