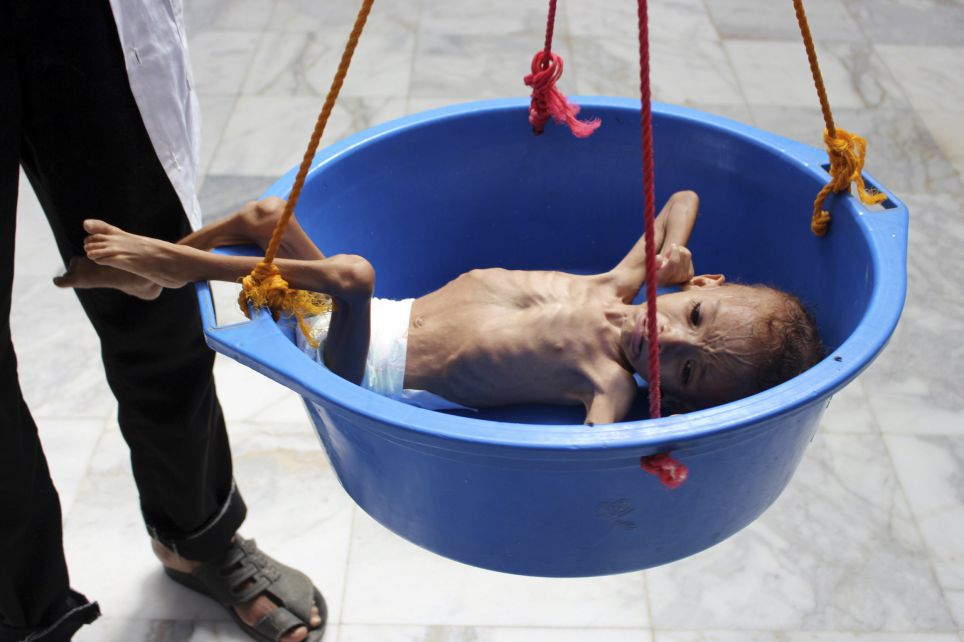 There are just three months left to avoid what could be ‘the worst famine in 100 years’, according to the United Nations.

Yemen is in the grip of a civil war that began three years ago with air strikes by Saudi Arabia contributing to the humanitarian crisis.

Lise Grande from the United Nations told the BBC: ‘I think many of us felt as we went into the 21st century that is was unthinkable that we could see a famine like saw in Ethiopia, that we saw in Bengal, that we saw in parts of the Soviet Union, that was just unacceptable.

‘Many of us had the confidence that that would never happen again and yet the reality is that in Yemen that is precisely what we are looking at.

‘We predict that we could be looking at 12 to 13 million innocent civilians who are at risk of dying from the lack of food.’

When asked if the world should be ashamed, she responded: ‘Yes. There’s no question we should be ashamed, and we should, every day that we wake up, renew our commitment to do everything possible to help the people that are suffering and end the conflict.’

The United Nations and humanitarian workers yesterday condemned an airstrike by the Saudi-led coalition targeting Yemen’s Shiite rebels that reportedly killed at least 15 civilians near the port city of Hodeida.

Video footage released by the rebels, known as Houthis, showed a mangled minibus littered with groceries and a woman’s hand bag, with rebel officials saying a day earlier that the airstrike in the Jebel Ras area had also wounded 20 others.

The Houthis said that five members of the same family were killed in the vehicle, adding that many women and children were among the casualties. Eyewitnesses who declined to be named for fear of their safety said that the attack appeared to target a rebel checkpoint in the area.

‘The United Nations agencies working in Yemen unequivocally condemn the attack on civilians and extend our deepest condolences to the families of the victims,’ said Lise Grande, the U.N.’s Humanitarian Coordinator for Yemen.

‘Under international humanitarian law, parties to the conflict are obliged to respect the principles of precaution, proportionality and distinction,’ said Grande. ‘Belligerents must do everything possible to protect civilians – not hurt, maim, injure or kill them,’ she added.

Hodeida, with its key port installations that bring in U.N. and other humanitarian aid, has become the center of Yemen’s conflict, with ground troops allied to the coalition struggling to drive out the rebels controlling it.

The United Nations in Yemen says that since June, more than 170 people have been killed and at least 1,700 have been injured in Hodeida province, with over 425,000 people forced to flee their homes.

The Norwegian Refugee Council also condemned the attack, calling such strikes on Yemeni civilians ‘unacceptable’ acts that have taken on a chillingly regular frequency.

Attacks that kill and maim civilians are no longer an anomaly in Yemen’s war,’ the humanitarian group said in a statement, summing up a rising and regular toll of civilian casualties since last summer.

In early August, dozens of people were killed by explosions outside a hospital and market, then over 50 people slaughtered a week later when airstrikes hit a busload of children, it said, and a week after that more than 25 people were killed in fighting while fleeing their homes near Hodeida.

‘The drumbeat of assaults on men, women and children is one that has become appallingly routine,’ it added.

The Saudi-led coalition has been locked in a stalemated war with the rebels since 2015.

An estimated 10,000 people have been killed in the conflict, which has produced what the United Nations says is the world’s worst humanitarian crisis.

With U.S. backing, the United Arab Emirates is leading an all-out offensive using local forces to take Hodeida, where the Houthis have dug in for a lengthy fight.

Thousands of civilians are caught in the middle, trapped by minefields and barrages of mortars and airstrikes.

If the array of Yemeni militias backed by the UAE takes the city, it would be their biggest victory against the rebels, although the battle on the Red Sea coast also threatens to throw Yemen into outright famine.