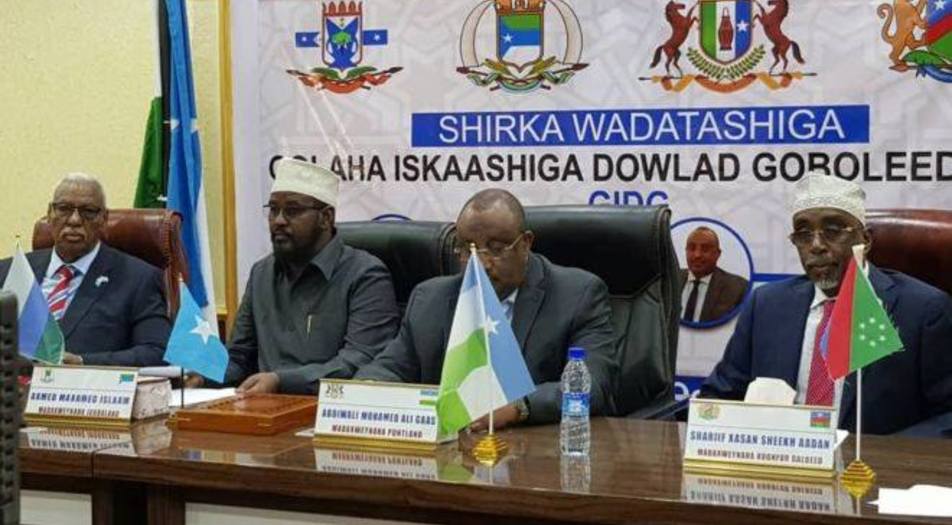 The Somalia federal States of Puntland Southwest, Galmudug and Jubbaland devised a new plan to carve a bigger slice of the international support to Federal Somalia for themselves by deciding to draw 1000 soldiers each to ‘combat Al Shabaab’.

In a communique released at the end of a four-day ‘summit’ the four heads of the federal states held in Garowe, Puntland, they declared the federal government at Villa Somalia failed to achieve any tangible results in the sphere of security.

The first point, with all its sub-paragraphs, was devoted to how dismally Mogadishu handled the very critical issue of ‘national security’.

“Since 2017 when the incumbent government took over the reins, the Council consistently aired its view on how the national security could be optimized, submitting critical advice and pursuant plans to achieve so,” the Communique’ said, adding that all fell on deaf ears.

Consequently, the Communique’ went on to elaborate, the Council of Inter-State Cooperation (CIC) decided to take the matter into their own hands.

The CIC decided to establish an Inter-State Security Council immediately, followed by the establishment of an Inter-State army composed of 4000 troops with each of the 4 states contributing 1000 soldiers, which will come under a central ‘command and control’, intimating that the troops will be independent of the federal government of Mogadishu.

“The troops will be deployed to emancipate areas still under the control of the enemy (meaning Al Shabaab),” the Communique stated.

The CIC, supplanting the roles and mandate of the National Leaders’ Council, and being 4 of the 5 federal states that formed the Federal Government of Somalia, has realized the clout they hold over Mogadishu, and has, apparently, decided to exploit it to the hilt.

To defeat Al Shabaab, the international community is left with little or no choice but to deal with the majority and treat Mogadishu on its own – perhaps as part of a to-be-formed Benadir State.

The task of putting the security plan into motion, reports indicate, went to Sheikh Ahmed Madoobe, the ‘president’ of Jubbaland State, obviously chosen, as observers put it, because he is presently the best placed to use the good offices of the Kenyan government to turn the sentiments, support of the international community to the CIC’s favor.

The CIC fully well knows, despite the hollow drums Villa Somalia beats against corruption and misappropriation of public funds, the 100s of millions of aid money finding its way to Somalia disappears into thin air only leaving behind doctored accounts and concocted, flowery reports to keep the flow going, as details just emerging of the scam pre-indicate.

The CIC, in the same conference, also proclaimed the formation of the National Progressive Party, uniting them as a formidable force ahead of the planned 2020 one-man, one-vote election for Somalia although that vision seems to be receding further back into a murky, unpredictable future in the face of the developing, fragmenting factors.