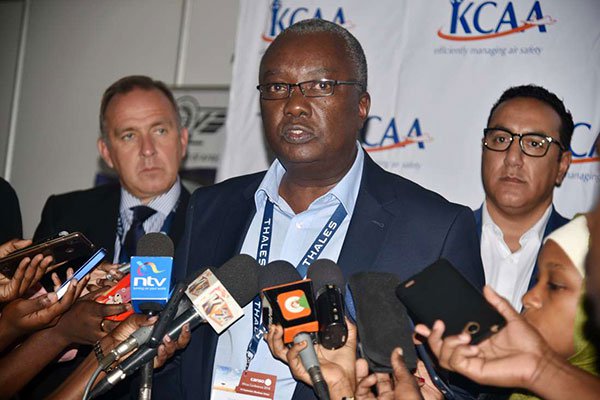 This comes barely a few months after the regulator directed that only cargo-configured aircraft can transport goods.

KCAA director-general Gilbert Kibe told the Business Daily that the three airlines are being investigated for violating Kenya’s aviation rules — a move that could see their licences withdrawn.

“We are investigating the matter and that means I don’t have much to tell you at this point,” Mr Kibe said in response to queries on the subject.

Breach of the regulations cannot only lead to withdrawal of operating licences but also risk causing a general ban on Kenya registered planes by international air transport regulators such as International Air Transport Association (IATA).

Cargo aircraft usually have special configurations that secure the cargo on board.

It has, however, emerged that several local airlines operating both at the Jomo Kenyatta and Wilson airports in Nairobi have been disregarding this requirement.

Kenya Airways was set to start flying on the same route on November 15 but postponed the flights to December 5, citing “operational requirements beyond its control.”

Mr Kibe, however, said flying cargo on passenger planes will not be tolerated and investigations to nab the culprits were under way.

KCAA’s decision to investigate rogue passenger airlines on the Nairobi-Mogadishu route comes barely a few months after it withdrew Jetways’ certificate over its flying of miraa (khat) to Somalia before completion of its premises at the Kenya Airfreight Holding Centre.

The investigations also found that the company’s warehouse did not have a Kenya Revenue Authority (KRA) customs centre as required by law.

The embattled airline’s licence was, however, restored two weeks later on grounds that the alleged security breaches did not happen from Jetways’ facility.

KCAA said the airline had all requirements for issuance of a regulated agent certificate, including the KRA customs, which were on site.

The airline was also found to have the latest state-of-the-art security screening devices.