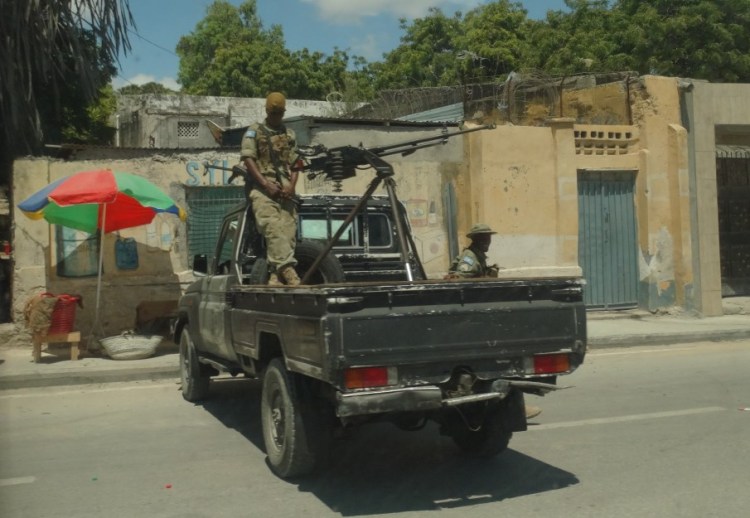 Al-Shabaab, Somalia largest terrorist organisation, is engaged in an economic war — and it is the country’s business sector that is getting hurt in the crossfire. Somali businessmen and local people on the ground are saying the rival Islamist groups are targeting companies, to an unprecedented degree, with demands or so-called taxes.

Al-Shabaab has already strong-armed business owners for years to finance its war against the Somali government, African peacekeepers, and the West. Now Al-Shabaab is stepping up its demands as pro-IS groups are apparently trying to fund their own activities by copying Al-Shabaab’s tactics of pay-up-or-pay-the-consequences.

Somali intelligence sources say IS militants killed telecommunications official Abdullahi Ali Omar in Bossaso on August 7 for not paying money to the group. IS related groups are also believed to be behind the recent shootings of at least eight employees of Hormuud, the country’s largest telecommunications company.
Businesses are paying three taxes today, Al-Shabaab taxes, Daesh [IS] taxes, and the normal government taxes. The businessman who is paying these three taxes, who started his business with a small amount, is going to be forced to flee to neighbouring countries because the business won’t pay for itself.

Hussein Sheikh Ali, who directs the Hiraal Institute, a Mogadishu-based research firm focused on security in the Horn of Africa says:

“If they don’t pay, they will be targeted, as well as their children and wealth. The punishment is death. They have to choose between the two.”

Although IS militants in Somalia are unlikely — given their relationship with Al-Shabaab — it’s possible they operate in different parts. There are reports of IS militant groups operating in Somaliland (?) and Puntland, which are not directly the operational areas of Al-Shabaab. In these areas, they have been left unchecked and are now on the rise.

Al-Shabaab’s greatest revenue comes from its system of taxing vehicles that are transporting goods through Al-Shabaab-controlled territory. As long as IS militants do not enter the specific AO of Al-Shabaab, then I think we have no need to worry about the IS militants group growing stronger in Somalia. It’s very simple, al-Shabaab has a hardcore following and to some — particularly some of the local population — still prefer to use Al-Shabaab protection, Al-Shabaab courts, and prefer living in the days in which ruled the Islamic Courts. For this reason alone, I do find it highly doubtful that the IS militants could really affect Al-Shabaab’s business, particularly within the south regions and particularly within the central region.

I would also like to add one last piece to the puzzle. A lot of the news reported often gets Somaliland and Somalia mixed up as the same country, when in fact they are two very different places. Somalia is a complex, broken, divided piece of land mass, and we should not tarnish the entire area with the same brush.

Jamie Read is a former British Army Reconnaissance specialist, after leaving the military he went on to work as Close Protection Officer (CPO) and surveillance specialist in the United Kingdom. Jamie would later join 3035 Special Operations Regiment in Ukraine and played a key role in establishing this regiment. With over 10 years military & security experience, having worked in the most demanding environments from the Middle East, Africa, Eastern Europe, and South America. Jamie is currently the chief operations officer at Grey Dynamics.