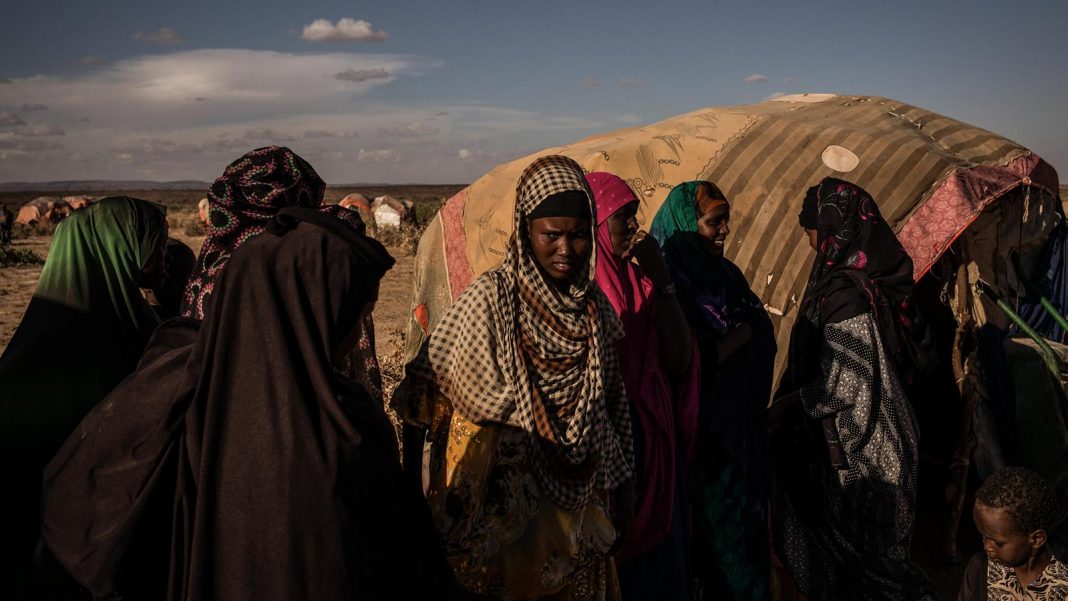 It is often said that climate change will hurt the world’s poorest people first. Nowhere is that potentially truer than in Somaliland, an unrecognized state in the Horn of Africa sandwiched between an expanding desert and the Red Sea. A prolonged drought has killed 70 percent of the area’s livestock in the past three years, devastating the region’s pastoral economy and forcing tens of thousands of families to flee their grazing land for urban camps, according to authorities.

“We used to have droughts before. We used to name the droughts, but they would be 10 or 15 years apart,” says Shukri Ismail Bandare, minister of environment and rural development. “Now it is so frequent that people cannot cope with it.”

Somaliland has endured regular cycles of drought for the past 20 years that have intensified since 2015 as consecutive rains have failed. The impact has been catastrophic for the nation of 3.5 million people, where livestock farming accounts for about 70 percent of economic activity. According to the U.N., 4.2 million people in Somaliland and neighboring Somalia will require food assistance next year.

“Four consecutive years of emergency hit Somaliland so hard and it’s all about climate change,” Bandare says. “You can touch it [climate change] in Somaliland — it is real, it is here.”

“IF THE IMPACT OF CLIMATE CHANGE IN THE LESS DEVELOPED COUNTRIES IS NOT ADDRESSED, THEN WE WILL ALL BE IN A BIG, BIG MESS.”

Somaliland is not alone. Across the Horn of Africa — a region that includes Somalia, Ethiopia, Eritrea, Djibouti and parts of Sudan and Kenya — drought has become the new normal. According to U.S. scientists, the region dried faster in the 20th century than at any other time in the past 2,000 years.

Changes in temperature in the Indian Ocean over the past decade, similar to the El Niño phenomenon in the Pacific, have directed winds eastward, pushing moist air that normally brings rains to east Africa away from the continent. As a result, some 13 million people across the region are suffering from food shortages, according to EU agencies.

“There has been tremendous change in one lifetime,” says Saad Ali Shire, Somaliland’s foreign minister. “Fifty years ago, we were a land of grass and wildlife, like the prairies of Kenya and America.”

Now, on the road from the capital to the coastal town of Berbera, barren land stretches to the horizon. To make matters worse, when it does rain, it comes in torrential storms that wash away the brittle topsoil, causing further damage.

In a few days in May, a rare tropical cyclone dumped the equivalent of a normal year’s worth of rain on parts of the country, resulting in flash floods that killed more than 50 people, according to the Somaliland government. Only half a dozen such tropical storms have made landfall in the Horn of Africa since accurate records began.

As environmental damage has increased, Somaliland’s contested political status has complicated relief efforts. The former British protectorate declared independence from Somalia in 1991 but is not recognized by the U.N., making it harder for Somaliland to access external support and humanitarian assistance.

It also makes reliable statistics hard to come by. In 2012, the World Bank estimated gross domestic product per capita at $347, making it the fourth poorest country in the world that year.

In such circumstances, efforts to find solutions can feel futile but Somaliland has some ideas. The government wants to settle 2 million people on the coast — where fish stocks remain abundant — by 2030 and reduce the rural population, currently at 50 percent, by half to take the pressure off the land, Shire says. At the same time, the country will try to develop its “blue economy” — fishing, aquaculture and shipping — and begin a reforestation program, he adds.

“Climate change is here; there is no use denying it because it is reality. Now we need to manage it to make its impact less severe,” Shire says.

Depopulation of rural areas is already happening. Somaliland’s capital, Hargeisa, has as many as 10 temporary camps with 150,000 families that have fled drought-stricken rural areas after their livestock died, says Bandare. “All of these families need handouts. All of them need three meals a day.”

The Somaliland minister was appointed in September as one of 22 international climate ambassadors to promote the goals of the U.N.’s Paris Agreement on climate change. Bandare argues that the poverty and displacement wrought by drought risk stoking further insecurity and suffering in what is already a volatile region, and says it is more important than ever for countries and regions to work together.

“We are a global village now — what is affecting one country is affecting every country and, if the impact of climate change in the less developed countries is not addressed, then we will all be in a big, big mess,” she says. “There will be more displacement, there will be huge migration, and there will seriously be more insecurity.”