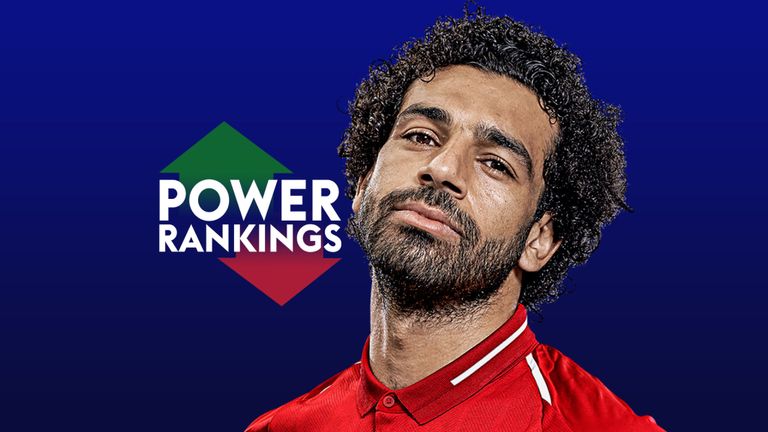 Liverpool’s Mohamed Salah has soared to the Power Rankings’ summit and ousted Raheem Sterling atop the season chart.

The Egypt international hit a hat-trick during a 4-0 win at Bournemouth to draw level with Arsenal’s Pierre-Emerick Aubameyang (No 21) atop the scoring chart with 10 league goals.

Meanwhile, Liverpool goalkeeper Alisson (No 6) kept his 10th clean sheet this term at the Vitality Stadium, with team-mate Virgil van Dijk (No 10) retaining his top-10 standing.

Tottenham’s Heung-Min Son surged into runner-up spot after breaking the deadlock in style before assisting Dele Alli (No 12) to head home Spurs’ second during a 2-0 win at Leicester.

Robert Snodgrass (No 3) maintained his run of form with a stunning leveller in a 3-2 win over Crystal Palace – having already assisted three goals in his previous two games.

Wolves’ Matt Doherty (No 4) scored his third league goal this season with a stoppage-time winner at Newcastle, while Manchester United’s Marcus Rashford (No 5) bamboozled Fulham stopper Sergio Rico to seal a 4-1 win.

Everton left-back Lucas Digne (No 7) struck a last-minute leveller against Watford, while namesake Lucas Torreira (No 8) scored during Arsenal’s 1-0 win against Huddersfield.

Below, we present the in-form chart based on performances over the past five Premier League matchdays (with greater weight placed on recent games), your club’s top points scorer and the season accumulative chart.

The Sky Sports Power Rankings will be updated every week during the season, so be sure to keep an eye on the big movers…