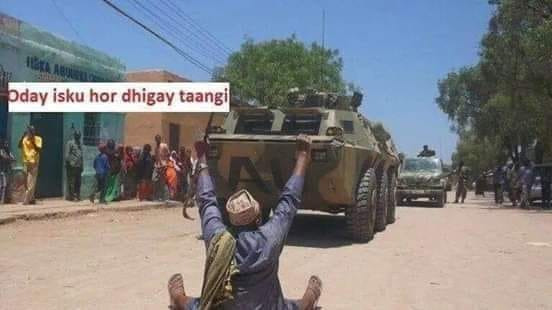 The National Salvation Caucus (NSC) of the Somalia Federal Parliament accused AMISOM of not only compromising impartiality but by actively inciting violence which endangered the ‘fragile peace’ of the country.

The Caucus, on the same vein, linked the violence they accuse of the African Union peacekeeping forces to a tacit support Ambassador Madeira held for President Farmajo whom they charge with ‘illegal meddling and interference of regional politics’.

“On December 13, 2018 AMISOM forces have detained Mukhtar Robow Ali, a presidential candidate and a frontrunner of the upcoming elections in the South West state of Somalia, and in the process AMISOM forces have killed many civilians in violation of international and local laws. This illegal act of incitement and violence endangered the fragile peace in Somalia and particularly in the South West state. The escalation of violence in the South West state has already spilled over to other parts of the country as people are protesting against AMISOM and the tacit support of Ambassador Madeira to President Mohamed Abdullahi Faramajo who is responsible for the illegal meddling and interference of regional politics and administration undermining the autonomy guaranteed by the constitution,” the NSC letter underlined.

In two more, very harshly worded paragraphs, the MPs expressed how disappointed they were with a triangular collusion connecting AMISOM, Ambassador Madeira and President Farmajo.

“AMISOM has compromised its impartiality by blatantly violating the very agreement it has signed with the government of Somalia, the Status of Mission Agreement (SOMA). Article 8 this agreement clearly states that; AMISOM and its members shall refrain from any action or activity incompatible with the impartial and international nature of their duties or inconsistent with the spirit of the present arrangement. AMISOM and its members shall respect all local laws and regulations. Thus AMISOM is responsibe for the tragedy in the city of Baidao and any potential escalation of violence in the country.

“It’s with great regret that we inform you that the African Union Special Representative for Somalia, Ambassador Francisco Madeira, has not acted in a manner consistent with the impartiality demanded by the position he holds and his tacit support to President Farmajo has motivated the return of an autocratic behavior. The trade-off of Madeira’s one year extension recommended by President Faramaajo is to give the current administration carte blanche to commit gross violations by using the state security apparatus to kill, maim and silence dissent voices,” the Caucus wrote.

The NSC communicated its full assessment of the situation unfolding in the Southwest Federal State of Somalia, Baidoa, to Chairperson of the African Union Commission, Moussa Faki,  the Special Representative of the UN Secretary-General (SRSG), Nicholas Haysom, the President of the Federal Republic of Somalia Mohamed Abdullahi Mohamed (Farmaajo), USA Ambassador to Somalia,  Ambassador Don Yamamoto, the UK Ambassador to Somalia, David Concar, and the African Union Special representative,  Francisco Caetano Madeira.

The complete text of the letter is copied below: