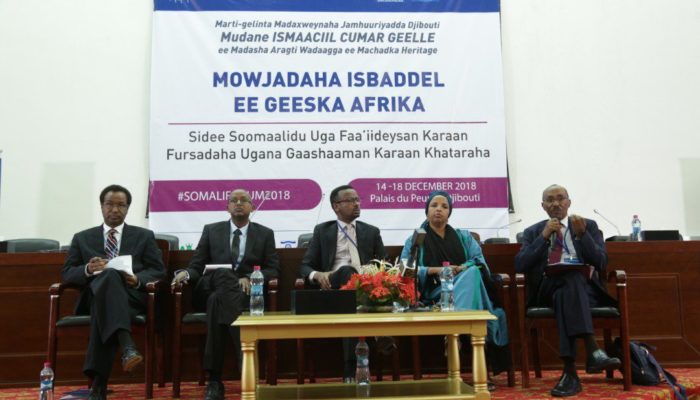 The efforts of any individuals or organizations will never undermine the wishes of Somaliland people who have consciously exercised their rights of self-determination in a publicized constitutional referendum overwhelmingly approved about 27 years ago. They chose to chart their future and unilaterally withdraw the union with the now defunct “The Somali Republic” created as a result of the unification of the Italian Somaliland (Amministrazione FiduciariaI Italiana Della Somalia) and the British Somaliland on July 1st, 1960

The president of Djibouti – Hon Ismail Omer Geele – sponsored a forum with a vague title “Forum for Vision Sharing by Somalis (in Somali: Madasha Aragti Wadaaga Soomaali)” under the auspices of The Heritage Institute for Policy Studies that was held in Djibouti on December 14 – 18, 2018.  The Heritage is an organization based in Mogadishu and has a close ties with the Federal Government of Somalia.  Abdirashid Khalif Hashi – current Executive Director of the institute  and former Somali government official– was in Washington DC on March 14, 2018pitching for Somalia in a hearing conducted by US Senate’s Subcommittee on Africa and Global Health Policy about Somalia’s Current Security and Stability Status

Among the other issues discussed, there was a separate session in the forum dedicated to the case of Somaliland and the stalled talks between Somalia and Somaliland. In this session, the opportunistic Somaliland natives who joined the Somali political establishment and claiming to be serving as MPs for Somaliland people were there.  Despite knowing these facts and the behavior of the Heritage Institute and its leadership, prominent figures of Somalilanders including Dr. Hussein Abdillahi Bulhan and Mohamed Bihi Yonis – former Somaliland foreign minister, attended the forum along with few other individuals handpicked by the institute from Kenya, Djibouti, and Ethiopian Somali state.

“What sets Somaliland apart from chaotic south Somalia is the respect that citizens have for the law of land and their confidence in the vehicle of government. This attitude is what brought about the peace and stability that puzzles the rest of the world up to this day how a tiny nation like her in a hostile region managed to foster such high level of order without any outside help.”

Ignoring intentionally this delegation of trust, responsibilities and authority under the claim or pretext of discharging your moral, professional, and civic duties to your nation is completely absurd if not ridiculous. It easily shows an intolerance and qualifies for taking the authority into your own hands whenever a path different from yours is adopted for any issue

Dr. Bulhan blatantly defended his participation in that forum claiming that he did so individually without representing Somaliland administration and as a capacity of a scholar because of his tremendous credentials. Whether this argument is acceptable or not the Somaliland public needs to decide but if it deemed to be ok, it is going to open a new door for quite a large number of Somalilanders with some sort of credentials to follow suit and take the matter into their hands without regard to the authority of the government.

Dr. Hussein Abdillahi Bulhan is a former tenured professor at Boston University and once the President of Hargeisa University in Somaliland. He is currently the President and Professor at Frantz Fanon University, which he founded in Hargeisa. On May 3, 2017, he announced going to Mogadishu, Somalia to present an essential and important lectures on the case of Somaliland, but the Somaliland government halted his trip.

The repercussion of this move by few individuals could weaken the Somaliland case and Somaliland administration should not let it pass by without firmly addressing it.