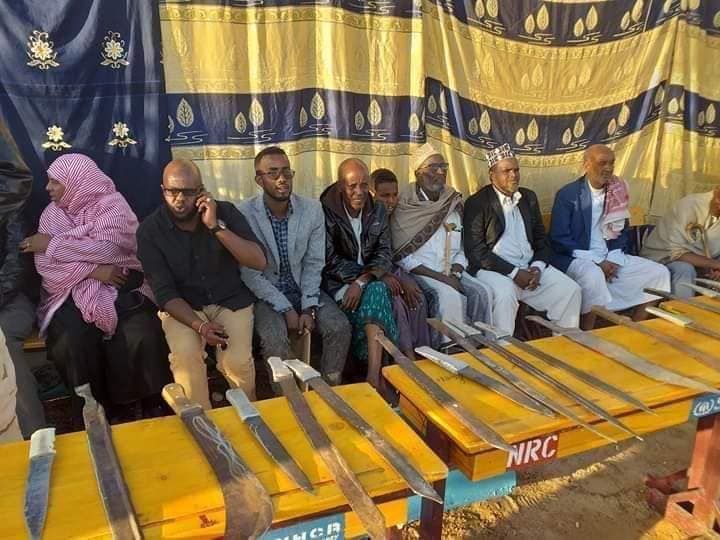 Youth gangs in Hargeisa checked in a wide assortment of knives, swords, and clubs studded with pointed metals at one of the Hargeisa police divisions Saturday.

Young men of, mostly upper primary and secondary school ages, from the district of Mohamoud Haibeh, and suburbs that come under its administrative jurisdiction, turned in their weapons deciding to lay aside their juvenile delinquency operations.

Brigadier General Abdirahman Liban ‘Foohle’, the Deputy Commander of the Somaliland Police Forces, expressed how uplifting the decision of the hitherto marauding youth gangs was.

“We wish to convey our felicitations to the youth ex-gangs from some of Hargeisa’s districts who had abandoned their old ways, turning in a variety of weapons,” the General said.

“We sincerely hope that what these young people have done serve as an example to the rest of erring youngsters.

Of late, youth gangs have spread across the country. The gangs, 95% of whom are school-going children, have become a menace to safety mugging people, snatching cell phones, robbing unarmed civilians, looting shops open late in the evenings, and the like. Occasionally, the robbers killed victims for one reason or another – and sometimes for ‘the fun of it’ escaping crime scenes before they were apprehended or identified.

Not only that but the gangs often attacked one another with fatal results.

Security forces waged a running battle against the gangs, rounding up thousands. But, still, the ‘phenomenon’ continued seemingly unfazed, un-discouraged by the stiff sentences meted out against culprits.

It was the first in the history of Hargeisa that youth voluntarily decide to relinquish weapons which they had often been using against one another, especially at evenings.