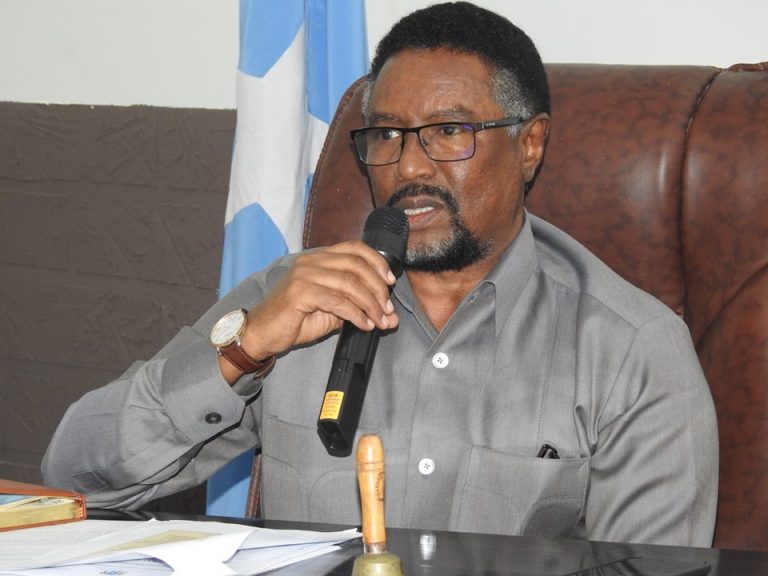 Mohamed Mursal Sheikh Abdirahman, Speaker of the Lower House of the Somalia Federal Parliament ‘Golaha Shacabka”, vowed to resign if he fails to bring about an unconditional, immediate release of Southwest ex-Shabaab leader-turned-state-politician, Mukhtar Robow.

Mursal, currently in Baidoa, the capital of the Somalia Federal State of Southwest, has gone into intensive meetings with traditional elders and ‘politicians’ the majority hailing from the same clan as Mr. Robow.

The talks, reports put, centred on two areas: lifting the barricades – visible and invisible – from large sections of the city which keep government officials, army and the rest of the city at bay which Mr. Mursal promoted; and, from the elders’ side, an immediate release and safe delivery of the ex-leader whose bid for the Presidency was cancelled by the federal government by arresting him ahead of the polling day.

Failing to convince the elders to accept his word on face value, Mr, Mursal, reports reveal, promised them financial ‘recompensation’ from the federal government amounting to several million US Dollars which – again – the elders, wary of another trick, rejected telling him that they would only consider the recompensation when Robow was delivered to them safe and sound.

Government troops heavily supported by Ethiopian troops stationed in the area as part of the AMISOM contingents, arrested Mr. Robow ion December 13, last year, on the pretext that Mr. Robow was deemed a menace to State security.

The troops roughed up Mr. leader who had a wide, loyal following among the region’s leading clans.

Demonstrators angered by the way he was manhandled and the thin excuse that led to his collaring to prevent him from a sure win at the presidential election took to the streets. More than 17 people. consequently lost their lives, including a federal MP.

The then Special Representative of the United Nations Secretary-General, Nicholas Haysom, the EU and a number of European Missions criticized the heavy-handed way Villa Somalia handled the whole Southwest affair including the arrest and killing of civilians.

To make matters worse, Mogadishu decided to expel the SRSG labelling him undiplomatically ‘persona non grata’. – which started the world wondering ‘who was feeding and protecting who’ – Somalia or the international community it so spurned.