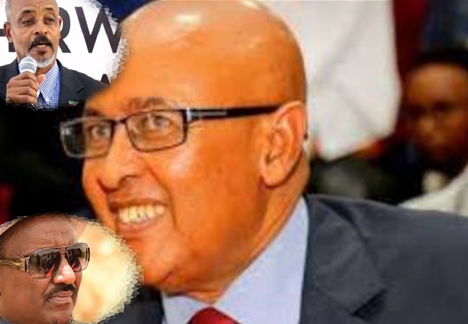 The government of the Republic of Somaliland lambasted the Waddani opposition party and its Chairman, Abdirahman Mohamed Abdullahi ‘Irro’, for conscious attempts to mislead public understanding of critical issues relating to the forthcoming parliamentary elections and other equally pertinent factors impacting on reconciliation, seats allocations, security and legality of electoral commission term.

The Somaliland Ministers for Information and Agriculture, Abdirahman Abdullahi Farah ‘Guribarwaqo’ and Mohamed Mumin Seed, respectively, separately tore apart Mr. Irro’s argument to the effect that His Excellency the President, Musa Bihi Abdi, and his ruling party – Kulmiye – were culpable on failure on a number of factors of national import including recurring delays to elections.

“Mr. Irro chaired the House of representatives for 12 years seven of which were based on extensions. For all those years he abjectly failed to draft and pass the necessary instruments including an Electorate Bill on which seats allocation among the regions would have been based. If any iniquity on failure rests solely on him – and him alone,” Minister Guribarwaqo said.

On Monday, 21 January – the same day the Somaliland Parliament’s Upper House – The Guurti – extended the Lower House term in office for the fifth time for another eight months, Waddani Chair, Irro, returned from a diplomatic spree that saw him seated with a number of foreign envoys in Nairobi and Addis Ababa.

Chairman Irro gunned a number of serious allegations on the government and the leadership of the incumbent president, Musa Bihi. He said the government ‘intentionally turned its back’ on a reconciliation process the former government started with Professor Ali Khalif and his Khatumo political faction, in an attempt to turn Sool and Buuhoodle residents against the government of Somaliland. He said the government was against the requested increase of number of seats allocation for Awdal region. He reiterated his position that his party will not participate in the upcoming elections unless the incumbent commissioners are disbanded ahead of the end of their constitutional term in October 2019.

“Chairman Irro has no right to appeal to Awdalites. During his over-protracted tenure as House Speaker he employed 138 persons at the parliament. Only 6 were from Awdal. In his present capacity as Waddani Chairman, he nominated 120 officers, among him are Secretaries (shadow ministers). Again, only 6 are from Awdal,” Minister of Agriculture and a former Deputy Chairman of Waddani itself, Ahmed Mumin Seed, pointed out.

National political observers, on their part, had, of recent, been critical of Waddani and its Chair stating that the frequent, caustic opposition to almost every move forward to resolve outstanding political hurdles were nothing but a questionable tactical procrastination as they were iniquitous defying legitimacy. They say Waddani Chairman was in no position to either criticize the Commissioners he approved who are still serving within their mandated term nor delays due to the absence of necessary bill(s) as he has nobody to blame but himself for that particular deficiency.

The Honorable Chairman of Waddani, Irro, resigned his 12-year post as House of Representatives Speaker only 2 short months before the Presidential elections he ran for were conducted in November 2017.