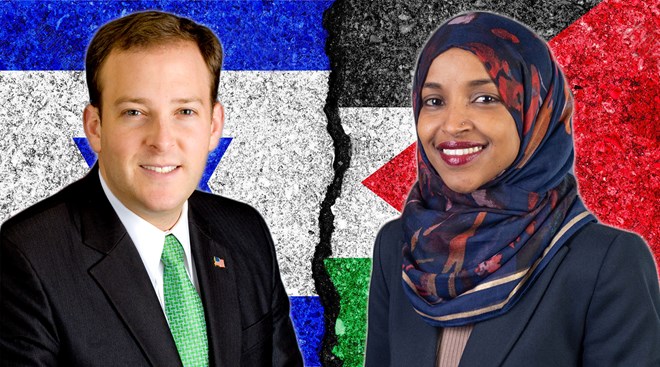 Rep. Lee Zeldin (R-N.Y.), who is Jewish, received a voice mail on Thursday that he wanted Rep. Ilhan Omar (D-Minn.), who is Muslim, to hear.

So he sent it to her publicly on Twitter.

It was a virulent, vulgar message from a man who wished “Hitler would have done his … job.” The anonymous man called Zeldin and “you people” “maggots” and “animals,” suggesting the United States’ support for Israel equated to killing Palestinians and that Zeldin himself was complicit. He told Zeldin to stop calling people anti-Semitic because “you’re worse than Hitler.”

“This new VM just came into my office,” Zeldin wrote in a tweet that tagged Omar on Thursday. “This is just another day in my world as an American Jew in Congress. Would love to know what part of this hate filled, anti-Semitic rant you disagree with?”

This new VM just came into my office. @IlhanMN, this is just another day in my world as an American Jew in Congress. Would love to know what part of this hate filled, anti-Semitic rant you disagree with? I disagree with all of it. Do you? pic.twitter.com/4WoJqiATCf

His latest tweet to Omar was part of a week-long war of words between the two representatives as each accused the other of being discriminatory against Jews or Muslims, respectively. Omar retweeted others who called Zeldin Islamophobic after he suggested Tuesday she had no place on the House Foreign Affairs Subcommittee on Oversight and Investigations. Zeldin accused Omar of being anti-Semitic because she supports the right to boycott Israel, and because of past anti-Israel comments she apologized for last week.

But after days of sparring, the voice mail seemed to change things. It appeared to align the Republican and Democrat against one thing they both detest and both experience: religious discrimination.

Rather than continuing the Twitter battle involving one of the world’s most hotly debated controversies, Omar proposed an apparent truce.

“This is heinous and hateful,” she responded on Twitter, referring to the voice mail left for Zeldin. “I too am flooded with bigoted voicemails and calls every day. Maybe we could meet and share notes on how to fight religious discrimination of all kinds? Maybe over Somali tea, in your old office which I happen to be in now.”

“Let’s do that!” Zeldin responded. He then urged her to support a resolution he has sponsored that rejects anti-Israel and anti-Semitic hatred, saying her backing the bill would be “a step in the right direction.”

Let’s do that! Are you saying you disagree w/everything said in that voicemail? I sure do & it would be great if you did as well & cosponsored & helped #PassHRes72. That would be a step in the right direction. https://t.co/RYIqDN5Mby

The fracas between Omar and Zeldin largely revolves around the representatives’ differing positions on the Israeli-Palestinian conflict and the anti-Israel movement called BDS, for boycott, divestment and sanctions. On Tuesday, Zeldin took to the House floor to promote his resolution condemning that movement, telling colleagues that anti-Semitism has managed to infiltrate “American politics and even the halls of Congress.”

He appeared to be referring to Rep. Rashida Tlaib (D-Mich.), a Palestinian Muslim, and Omar, because of their support for the right to boycott Israel. He explicitly called Omar anti-Semitic on Twitter later and has said her appointment to the House Foreign Affairs subcommittee amounted to “empowering” anti-Semitism.

But Omar’s view on the issue, she has contended, has nothing to do with religion. Rather, she has said, she supports the right to boycott Israel because she condemns the Israeli government’s treatment of Palestinians. She has said she opposes bans on boycotting Israel because she believes it is un-American to ban people from boycotting.

Many of them truly know this, but don’t want to accept it. In the same way many Americans knew separate yet equal was immoral but remained silent until brave few were silent no more.

They can attack, spin my words and vilify me, but they will not succeed in silencing me! https://t.co/JSwhoSQuGF

Later Tuesday, after Zeldin’s impassioned speech on the House floor, he took to Twitter to share some personal news — while also denigrating Omar in the same breath.

“Was just selected as Ranking Member of the [House Foreign Affairs Subcommittee on Oversight and Investigations]!” he wrote. And then: “Just learned Freshman Rep. Ilhan Omar was also put on this committee w oversight of US foreign policy. Crazy to watch what House Dems are empowering/elevating.”

Right away, some called his statement an “Islamaphobic dog whistle” — or rather a “bullhorn” — that suggested Omar was not fully American and therefore shouldn’t oversee U.S. foreign policy. Omar appeared to agree. Sharing a tweet that described Zeldin’s statement as Islamophobic, Omar responded by suggesting the congressman simply couldn’t handle having to work alongside Muslim women in the House, appearing to mock him with a tongue-out, winky-face emoji tacked on to the end of her tweet.

“Don’t mind him,” she wrote. “He is just waking up to the reality of having Muslim women as colleagues who know how to stand up to bullies! It’s gonna be fun watching him lose his marbles.”

Don’t mind him, he is just waking up to the reality of having Muslim women as colleagues who know how to stand up to bullies!

It’s gonna be fun watching him lose his marbles 😜 https://t.co/FPEtcxW4GN

“Those poor innocent ISIS fighters & Palestinian terrorists right? Give me a break!” Zeldin responded. “That’s a problem no matter your religion or gender Ilhan. Your anti-Semitic & anti-Israel hate is strong & wrong & those terrorists have US blood on their hands as well.”

The Daily Show with Trevor Noah,” where the comedian asked her to further explain her anti-Israel comments from 2012. In a resurfaced tweet, Omar had said: “Israel has hypnotized the world, may Allah awaken the people and help them see the evil doings of Israel” — language many said evoked Nazi conspiracy theories about Jews’ power to hypnotize the world.

Omar told CNN on Jan. 17 that she did not know “how my comments would be offensive to Jewish Americans,” and that she was “clearly speaking about the way the Israeli regime was conducting itself” during the Gaza conflict. Bari Weiss, a New York Times columnist, explained to Omar why many Jews found it so offensive in a biting commentary last week that prompted Omar to backpedal and apologize for not putting enough energy into “disavowing the anti-Semitic trope I unknowingly used.”

On Thursday, when Noah broached the subject, Omar compared her defensiveness about her tweet — denying that she was anti-Semitic — to the way poor white people react when some say they still possess “white privilege.”

“With that tweet, what I finally realized is the realization that I hope that people come to when we’re having a conversation about white privilege,” she told Noah. “You know, people would be like, ‘I grew up in a poor neighborhood. I can’t be privileged. Can you stop saying that? I haven’t benefited from my whiteness!’ And it’s like, ‘No, we’re talking about systematic, right?’ And so for me, that happened for me.

“I was like, ‘Do not call me that [anti-Semitic]. … And it was like, ‘Oh, I see what you’re saying now.’ And so I had to take a deep breath and understand where people were coming from and what point they were trying to make, which is what I expect people to do when I’m talking to them, right, about things that impact me or offend me.”

Omar clarified that in any conversations about Israel or the BDS movement, she is criticizing the Israeli government, not Jews in general.

“What is important in this conversation is that we separate the land, the people and administrations,” she said.