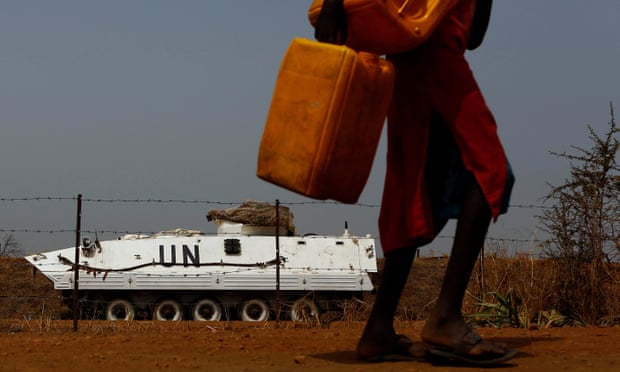 South Sudan’s cash-strapped government is spending almost half of the money ear-marked for the country’s fragile peeace dal on funding renovations for politicians’ homes.

Two sets of internal government documents seen by the Guardian show that in December and January more than $135,000 (£105,000) was authorised by the National Pre-Transitional Committee (NPTC) – the group charged with overseeing the initial phases of the peace deal and managing money allocation – to renovate two politicians’ houses. They include the home of first vice president Taban Deng Gai, and that of the late Dr John Garang. His widow, Rebecca Nyandeng De Mabior, is expected to be one of the country’s five vice presidents under the new agreement.

The war-torn nation has been struggling to pay for the bulk of the peace deal’s implementation, citing a lack of funds and calling on the international community for help.

The government had originally pledged more than $1.4m to the peace fund but only deposited $400,000 into the account, Henry Odwar – deputy chairman for the opposition and deputy for the NPTC – told the Guardian. He has called into question the allocation of renovation funds and said he tried to stop the transaction but was outvoted by government members on the peace committee. “How will the international community look at us?” he said.

Martin Elia Lomuro, South Sudan’s minister of cabinet affairs, insisted that the money is being used as stipulated in the peace agreement. “There’s money to spend on accommodation for the people coming to run the country,” he said.

At least one advocacy group is calling the choice of funding priorities troubling.

“The parties’ signatory to the peace deal say the implementation is slow due to a lack of funds but surprisingly they are allocating money to renovate public officials’ houses. So it’s disturbing when they then challenge donors for lack of interest [in funding] the peace deal,” said Edmund Yakani, executive director for Community Empowerment for Progress Organisation, a local civil society group.

The new deal, which has been riddled with delays, missed deadlines and questionable political will, has been met with reluctance by the international community. The UK, US and Norway, the troika group that helped usher South Sudan to independence in 2011, didn’t sign the agreement, citing concerns about the “parties’ level of commitment”.

South Sudan’s five-year civil war caused the death of close to 400,000 peopleand displaced millions. More than half the population, seven million people, rely on humanitarian assistance, according to the UN.

The government has a history of big spending on its officials. In July it gave $16m in car loans to 400 MPs, according to government spokesman Ateny Wek Ateny. At the same time, civil servants across the country hadn’t been paid in months. In December almost $2m was given to members of parliament for an allowance during the three-month recess for the purpose of facilitating discussions within their communities about the peace process, according to Yakani.

“The misappropriation of assets meant for public goods and services is tragically common in South Sudan,” said JR Mailey, director of investigations at the Sentry, a Washington-based group that has reported on links between corruption and mass atrocities. “[It doesn’t seem to matter] whether it’s oil proceeds earmarked for community development projects, funds meant to stave off starvation, or cash meant to subsidise fuel or medical goods.”

By Sam Mednick in Juba