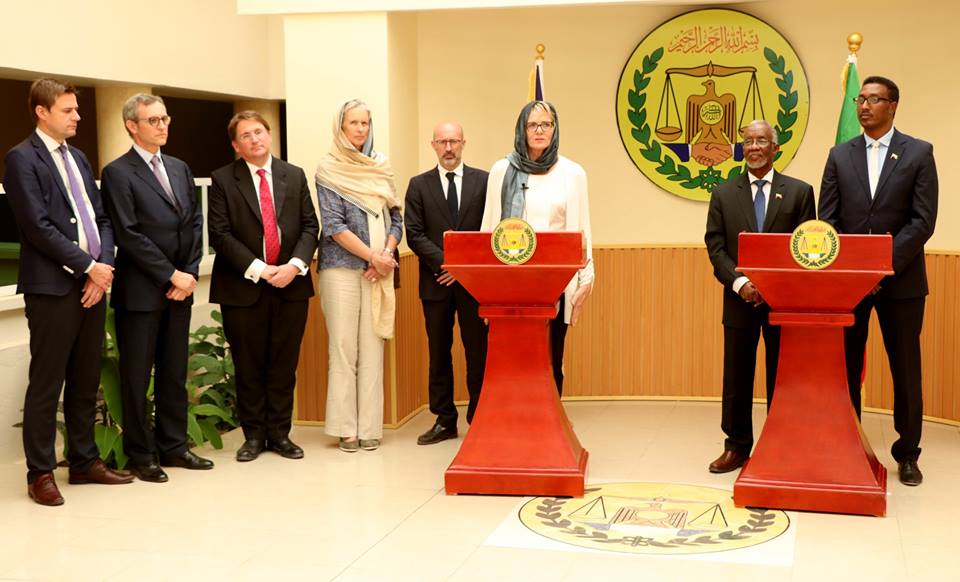 ‘We are here as some of (the) close friends of Somaliland’

“This is a distinguished delegation of colleague, ambassadors and representatives of Denmark, Norway, Sweden, Finland, Switzerland, the UK and the European Union” Ambassador Mette Knudsen of Denmark began her brief of the press at the conclusion of a meeting the delegation had with His Excellency the President of the Republic of Somaliland, Musa Bihi Abdi.

Ambassador Knudsen called the meeting which the delegation had with the president ‘productive and very interesting’.

“We had a productive and very interesting discussion with His Excellency the president and several of his ministers.

“We are here as some of (the) close friends of Somaliland,” Ambassador Knudsen states, adding that the delegation expressed its concern on the humanitarian situation in Somaliland caused by the continued drought in the country.

The two sides, the Ambassador said, also discussed Somaliland’s relations with its neighbours.

“We were very pleased with the strong commitment from the President to have a good dialogue with Somalia,” she stated.

Ambassador Knudsen said the discussions they had with the President and his government also covered the upcoming elections as members of the delegation were supporters of Somaliland’s ‘democratic process’.

“We have discussed with the president our hope that it will be possible to find a compromise with political actors that will lead to elections this year,” Ambassador Knudsen said.

The ambassador reasoned, besides the obvious, that holding the elections on time and as promised was ‘part of the good image that Somaliland has in the international community’ and that it was imperative that Somaliland not discontinue its democratic record which it had set in the past.

His Excellency the Minister of Foreign Affairs and International Cooperation, Professor Yassin Mohamoud Hiir ‘Faratoon’, speaking before the Ambassador, stated that the two sides frankly discussed issues revolving around the ominous drought looming over Somaliland, the political process and especially as pertaining to the scheduled parliamentary elections and the commitment to continue talking with Somalia.

Present at the meeting on the Somaliland side besides His Excellency the President were the Vice president, Abdirahman Abdullahi Ismail, Minister for Interior, Mohamed Kahin Ahmed, the Foreign Minister, Professor Faratoon, Finance, Dr Sa’ad Ali Shire, and Planning, Awale Ibrahim Shirwa’.

Dozen of European Ambassadors are walking freely in most populous markets of the capital of Somaliland without a guardian. This is extremely impossible in most AFRICAN and some of Asian countries. It sends a powerful massage to world.#EU#Somaliland #Somalilandpeacefulcountry pic.twitter.com/xeGFXhAhcD

Members of the delegation also met with the Parliament finding time, too, to leisurely stroll around town checking out the local scene.

Glad to receive a High Level Delegation from Denmark, UK, Sweden, Norway, Finland & Switzerland along with the EU Ambassador.

We discussed elections, Somaliland- Somalia dialogue, drought, humanitarian aid, regional security and the dynamics in the Horn of Africa. pic.twitter.com/Ff96oLNYpd

Delighted to warmly receive our partners of high level delegation from the #European #Union, #Sweden, #Finland, #Denmark, #Norway, #Switzerland and the #United #Kingdom, who arrived in #Hargeisa, the capital city of the #Republic of #Somaliland on an official working visit. pic.twitter.com/Xpq3pxhw5B

Ambassadors from Denmark, EU, UK, Sweden, Norway among other diplomats are in #Somaliland. This is what they have discussed with the PRES @musebiihi pic.twitter.com/l4bLwLr4dh

Ambassador Rognlie has concluded a high level visit w/international partners to #Hargeisa to experience honest discussions, warm hospitality and strong commitments towards the democratization processes of #Somaliland and the regional dialogue. https://t.co/UkKXeHYehH pic.twitter.com/s0YOVA47ek

In Hargeysa with my European colleagues to discuss with President H.E. Bihi and Somaliland political leaders plans to ensure Parliamentarian and local elections by December 2019. pic.twitter.com/FGL9OaVHbp

Ambassadors from Denmark, Switzerland, Finland, Norway, Sweden, Uk, and the EU have arrived in #Somaliland today for talks related to the IC's interventions towards the Somaliland development & the Somaliland Democratic process including the timely holding of Somaliland elections pic.twitter.com/xLidknvmEQ