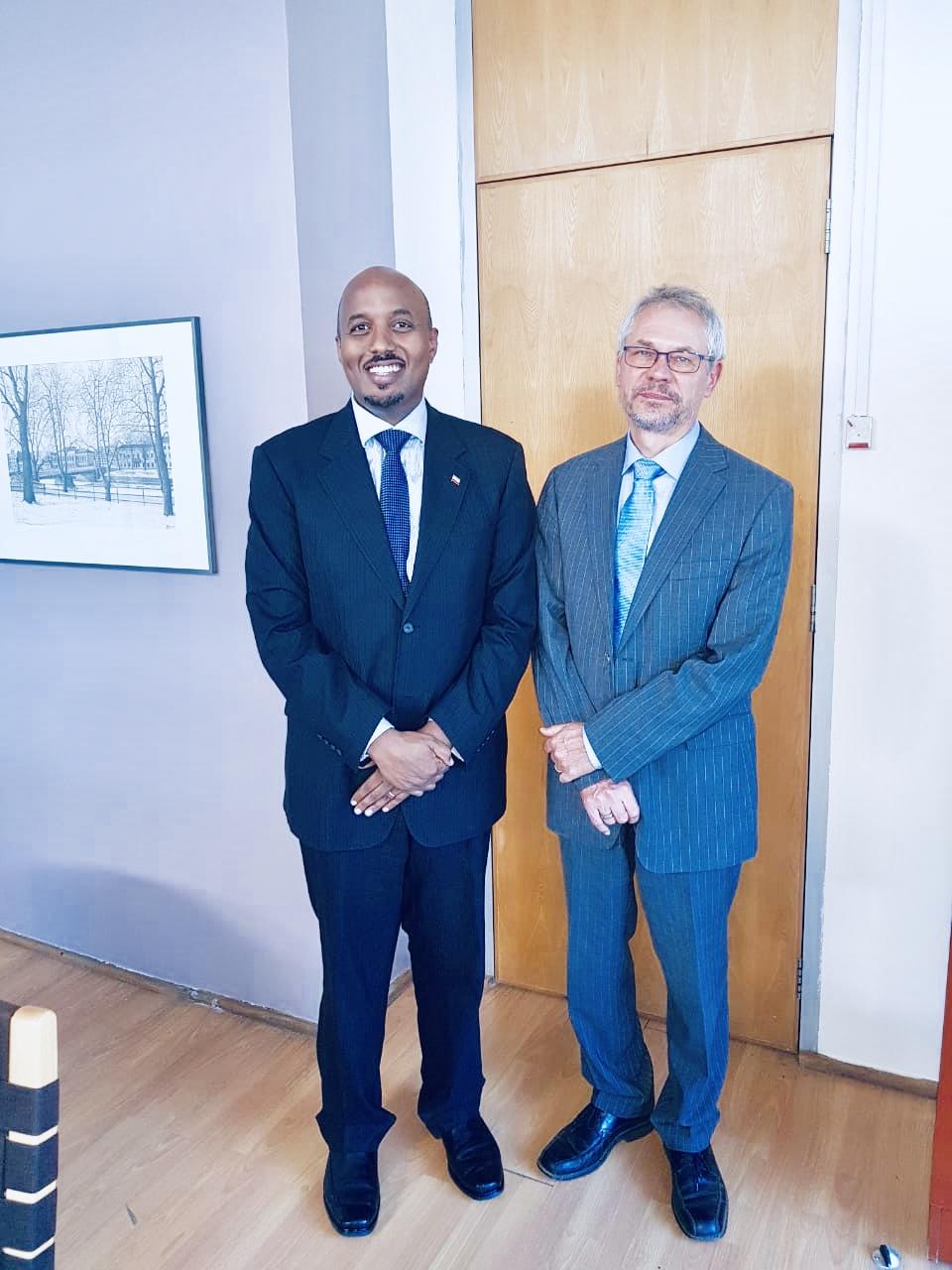 Ambassador Bashe Awil Haj Omar continues to keep up a highly successful, fast-paced profiling of his country to the international community as represented in Kenya’s capital, Nairobi, which he started since his appointment to head the Somaliland Liaison Mission to Kenya.

On Thursday, April 12, he met with His Excellency the Finland Ambassador to Kenya, Erik Lundberg, at the latter’s office.

“Our discussion focused on various issues among other things and it included: the upcoming Parliamentary Elections in Somaliland, The Economic and Social development cooperation between Somaliland and Finland as well as Politics and economic integration currently underway in the Region,” Amb. Bashe Omar said.

It was only a day earlier that the suave, western-educated, charismatic Rep paid a courtesy visit to the French Embassy where he with Ambassador Aline Kuster-Menager.

During the visit, the two diplomats discussed a number of issues that included – but not confined to – ‘possible collaborations, social investments and security cooperation’.

Ambassador Bashe was among the dignitaries invited to the 25th commemoration of the Rwanda Genocide against Tutsi and Moderate Hutus at United Nations Offices Nairobi, last Monday, April 9.

The event was organized to mark the highly devastating Rwanda genocide in 1991 during which 800,000 men, women and children were brutally murdered.

The occasion somberly remembered the courage of those who risked their lives to save others as well as those who fell in the senseless spree of killing in a period of time to be eternally regretted.

“Somaliland people are inspired by the remarkable progress Rwanda has made in rebuilding since 1994. We are proud of Rwanda as it continues to fight impunity for atrocities, lift millions of its people out of poverty, and build a peaceful and prosperous future for its citizens,” Ambassador said.

Since he assumed office in 2018, the young Representative embarked on a mission to introduce his often misunderstood, definitely wronged nation to the world starting with legislators and ministers of his host country, Kenya.

Ambassador Omar served his country as Head of Mission in the United Arab Emirates before his current assignment where he succeeded to attract the largest foreign investment for Somaliland running into hundreds of millions of US Dollars, putting Somaliland at the head of UAE’s Foreign Direct Investment (FDI) for 2018.

A sample of his meetings is depicted by the Tweets copied below.

1/2
Today I paid a courtesy call to Amb. Nicolas Nihon, the Belgium Ambassador To Kenya. I have discussed with the Ambassador the importance of the role of Somaliland as an international partner when it comes to the issue of security among other things. pic.twitter.com/H4ZtcBB4Ul

2/2
I thanked the ambassador for the role the EU and other donors are playing in supporting Somaliland achieve its National Development Plan II (NDP II). pic.twitter.com/AAUsZHpBJ8

Tonight we are hosting the #Somaliland Diaspora Convention, East and Central Africa Region. We have a delegation of our honourable ministers and other distinguished guests from the Somaliland community, we look forward to a great and productive evening. pic.twitter.com/DjqX5yzvYr

The President of the Republic of Somaliland His Excellency Mus Bihi Abdi has welcomed in his office Finland's Ambassador to Kenya, Somaliland and Somalia Ambassador Eric Lundberg. pic.twitter.com/jDIquq0sK9

In matters security, economic integration, social development and environmental sustainability.We also shared with him that Somaliland is actively pursing it's international Recognition Status and it should be time International community accepts the aspirations of the SL Pple. pic.twitter.com/cLcaiMKpws

2/3
I also shared with the ambassador that Somaliland is committed to peace process, democratization and the resumption of talks between Somaliland and Somalia. Somaliland plays a critical role in the International community Fora. pic.twitter.com/OGzSc24N1X

1/3
Today I paid a courtesy call to the Switzerland Embassy in Nairobi at the invitation of Ambassador Dr. Ralf Heckner . The courtesy call focused on development cooperation projects administered by Switzerland in Somaliland. pic.twitter.com/pvZNu4Fqqp

2/2
We discussed several matters touching on the Substancial support of the Germany Development organisations such as GIZ & KFW in Hargeisa Water project, Technical and Vocational Education Training institution. We also discussed the German involvement in the capacity building . pic.twitter.com/xJXOKAdrdH

1/2
It was a pleasure to have paid a courtesy call to the Deputy Ambassador of Germany, Markus Bollmohr, at the German Embassy Nairobi. Germany has supported and continues to support social development projects in Somaliland. pic.twitter.com/V2DSgRU9q7

3/3
It was a pleasure to have a fruitful discussion on the Horn of Africa political issues, with Yussuf Hassan MP for Kamukunji and Ibrahim Ogle Assistant Director at Kenya Wildlife Services (KWS) pic.twitter.com/7i897pjCG4

2/3
Nevertheless we should all embrace and congratulate the success of all Somalis and likewise hope our brothers in Somalia would embrace Independent Somaliland that is stable and democratic . pic.twitter.com/rfK7irn5SP

2/2
The Ambassador thanked the leaders of the two houses for the support accorded to the Somaliland parliament in training, democratization processes and capacity building. Both leaders welcomed Ambassador Bashe to Kenya. pic.twitter.com/0pH7BHT07K

1/3
Kenya has many leaders of Somali origin who have prominent positions in the Kenya Government and this true testament that you can be a Somali (Kenya), Somali (Ethiopia), Somali (Djibouti), Somali (Somaliland) and Somali (Somalia). pic.twitter.com/WoFpaiX2QK

It was a pleasure to have paid a courtesy call to Ambassador Andreas von Uexkull, the Swedish Ambassador at his office in Nairobi, Kenya. Sweden continues to play a critical role in the development of Somaliland and its one of the biggest donors to Somaliland. pic.twitter.com/mdqIid8ieL

The Somaliland Liaison office in Nairobi condemns in the strongest possible terms, the cowardly terrorist attack on the Dusit hotel and complex.

Somaliland stands in solidarity with Kenya during this unfortunate incident.

We condole with the families of the victims.

We would like to thank all who joined us today, our ministers honourable ministers, the govt of Kenya & our team for making the #SomalilandKenyaForum a success. We look forward to the follow through of the connections made today in pursuit our country’s prosperity. #asantesana pic.twitter.com/NeFeVJZxSS

Today we are getting #Somaliland on the world map, we are hoping to establish some strong partnerships with Kenya and everyone across the world. Please share #SomalilandKenyaForum

Ambassador Bashe A. Omar and his Deputy Ambassador Mr. Ayaanle S. Deria paid a courtesy call to Honorable Peter Munya, The Minister of Trade and Industrialization for Kenya. AMB. Bashe discussed on how to encourage trade between Kenya and Somaliland and foster relationship . pic.twitter.com/1GUhbKxA4v

@ The Embassy of Denmark in Kenya, AMB Bashe Awil , was pleased to join the donors and
Other Embassy representatives from Denmark,Netherlands, the UK and Kenya government representatives for the launching of the Maritime Crime Research by the university of Copenhagen. pic.twitter.com/FNRf4DGVX6

It was a great honor to host Engineer Mahboub Maalim Secretary of the Intergovernmental Authority on Development [IGAD] at our Somaliland Liaison Office in Nairobi,Kenya which was led by the newly appointed Ambassador Bashe Awil Haji Omar and Deputy Ambassador Ayanle Salad. pic.twitter.com/0L3rPHtKAl