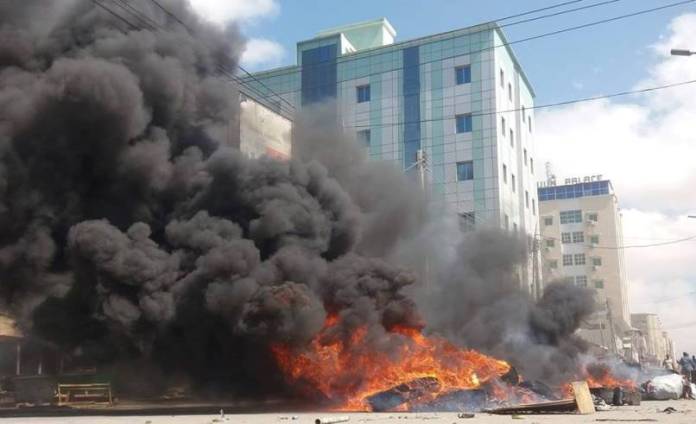 Three more people, according to one lawmaker, had been killed since yesterday.

The latest victims fell by bullets security forces fired on angry demonstrators attempting to reach the front gates of Villa Somalia, the Somalia government seat, to protest the senseless killing of Rickshaw drivers.

On Friday, alone, a police officer shot dead a young driver and his uncle who was riding with him as a passenger. The killing, as a score before it was unjustified. The killer, also, again as before, escaped the scene of the crime unapprehended.

What was different in today’s and yesterday’s demonstrations was the fact that demonstrators – most of whom drivers of public transport vehicles, friends and relatives – were carrying the corpses to emphatically underline that they would no longer accept the wanton murders and bury their dead in silent grief.

Reports state that security forces for reasons only known to themselves targeted rickshaw drivers. If not killed, many would be dragged to jail ‘on suspicion of working with Al Shabaab, Daesh and other subverts’.  Many had been executed on such flimsy pretexts – at least one of them on his first nuptial, honeymoon week.

Except for platitudes and assurances that had not improved the situation in the past, neither regional nor Central government authorities have come up with plausible, workable plans.

In its place, President Farmajo gunned blistering threats on demonstrators crying that ‘the government will use an iron hand on anybody who tried to compromise nationhood’ – which was interpreted as ‘anyone who so visibly criticized the government or brought its failures to public and international limelight ‘.