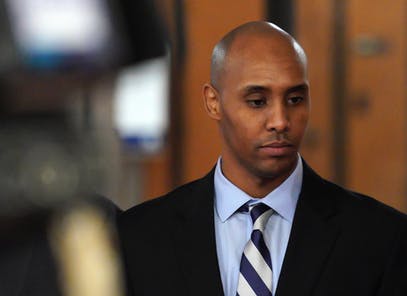 Many say the murder trial of the former Minneapolis police officer has widened the gulf with law enforcement.

On the same day former Minneapolis police officer Mohamed Noor was convicted last week of fatally shooting an unarmed civilian, another young Somali-American was graduating from the Minneapolis Police Academy.

“When somebody is graduating we all dress up and we will go there and celebrate,” said Waheid Siraach, co-founder of the Somali-American Police Association. “There was no such thing this time around. One of us was going to jail, and another one was coming out of the academy.”

News of Noor’s guilty verdict has sent shockwaves and sparked outrage in the Somali community. Many community members say Noor’s trial exposed systemic racism in the justice system and widened a deep rift between the community and law enforcement. They also worry that the ruling will deter young people from joining the police force. Others have raised concerns about the third-degree murder conviction, demanding an outside investigation and calling for the reopening of Noor’s case.

Meanwhile, Minneapolis leaders are redoubling efforts to reach out to the Somali community since the verdict, hoping to work out their differences and do some damage control. They expect to meet with the Somali American Police Association (SAPA) and sit down with leaders of the Somali community for iftar, the fast-breaking meal by Muslims observing Ramadan, the month of daily fasting.

“This is an opportunity for all of us to come together. It’s going to take some time, but we have to focus on fairness, justice and getting people together,” said state Rep. Mohamud Noor, a Somali-American who sits on the House judiciary and civil law committee. “We need to address the whole issue of criminal justice reform and make sure that people are not being targeted because of the color of their skin, where they live and who they worship.”

AK Hassan, the first Somali-American to be elected to the Minneapolis Park Board, said he is convinced there’s a racial disparity in the criminal justice system, adding Noor’s guilty verdict was not surprising. Hassan, who was among activists protesting for police accountability during the fatal police shootings of Jamar Clark and Philando Castile, pointed to the record $20 million settlement reached with Justine Damond’s family.

“Justine deserves justice,” Hassan said. “But the criminal justice system has never worked in favor of people of color.”

Haissan Hussein, president of SAPA, said the Minneapolis Police Department and Hennepin County Attorney Mike Freeman singled out and aggressively charged Noor. Since the verdict, SAPA has not met with Minneapolis Police Chief Medaria Arradondo, and SAPA leaders say they have no immediate plans to meet with him.

SAPA, a nationwide organization, was founded to bridge the gap between the community and police and recruit young Somali-Americans into the force. In the past decade, SAPA has recruited about 20 Somali-American police officers nationwide. Minneapolis now has eight Somali officers.

The case has stirred other concerns beyond recruiting young Somalis to pursue law enforcement careers.

At the Village Market in Minneapolis, also known as the 24 Mall, men of all ages debated Noor’s guilty verdict one recent afternoon.

Why was Noor’s case so different from past fatal police shootings? Why are white police officers not brought to justice for killing black civilians? And if Noor and Damond’s races were reversed, would Noor be a free man?

Gani Hirsi, a longtime friend of Noor’s father and owner of Gulet Dairy and Grocery in the mall, said Noor was unfairly tried because he’s black, Muslim and an immigrant from Somalia.

“He didn’t kill the white woman intentionally,” Hirsi said. “He was protecting himself.”

Hirsi said he had known Noor since he was a young man and a college student. He said Noor joined the force because of the love he had for his adopted country and his love for the profession.

“He’s a young man with a good heart and a good character,” he said.

The men at the mall lined up to share their feelings about the case. At least in the beginning, none of them had any hint that Noor would be found guilty of murder, they said.

Ismael Colad Dahir, an uncle of Noor, said he thought his nephew would get acquitted of all charges.

“I’m very disappointed and sad, and the rest of the family feels the same way,” said Dahir, 70. “We feel bad about this. He had the right to protect himself.”

Meanwhile, some in the community are worried that Noor’s sentencing, scheduled for June 7, will coincide with festivities for Eid al-Fitr, a celebration marking the end of Ramadan.

“I’m very disappointed. … He had the right to protect himself,” Mohamed Noor’s uncle, Ismael Colad Dahir, said of the case.

“This Eid will be a very sad Eid,” said Mohamed Abdi Muhumud, who said he prays at the same mosque as Noor’s father. “What’s happening is unfair.”

A moment-by-moment look at when Justine Damond was shot

The fatal shot was fired about 2½ minutes after the squad car arrived behind Damond’s home.

The murder and manslaughter charges against Minneapolis police officer Mohamed Noor gave a moment-by-moment account of events at the scene when Justine Damond Ruszczyk was shot on the night of July 15:

11:27:01 Justine Damond called 911 and reported the screaming of a woman in the alley behind her house either having sex or being raped.

11:27:42 Dispatch contacts the squad car of Noor and partner Matthew Harrity about a “female screaming behind building.”

11:35:22 Damond called 911 again, concerned that police have yet to arrive and possibly giving the wrong address.

11:37:29 Damond called her fiancé, Don Damond, ending the conversation 1 minute and 41 seconds later by telling him that police have arrived.

11:37:40 Squad car entered alley from 50th Street and headed south with headlights off, driver’s side spotlight on.

11:39:34 Noor entered “Code 4” into squad car computer, telling dispatch and other officers that there was no threat and no need for assistance. Squad car encountered bicyclist at the end of the alley just as they were about to back up officers on a different call.

11:40:32 Harrity radioed, “Shots fired, one down,” and called for immediately assistance from emergency medical personnel.

Paul Walsh is a general assignment reporter at the Star Tribune. He wants your news tips, especially in and near Minnesota.