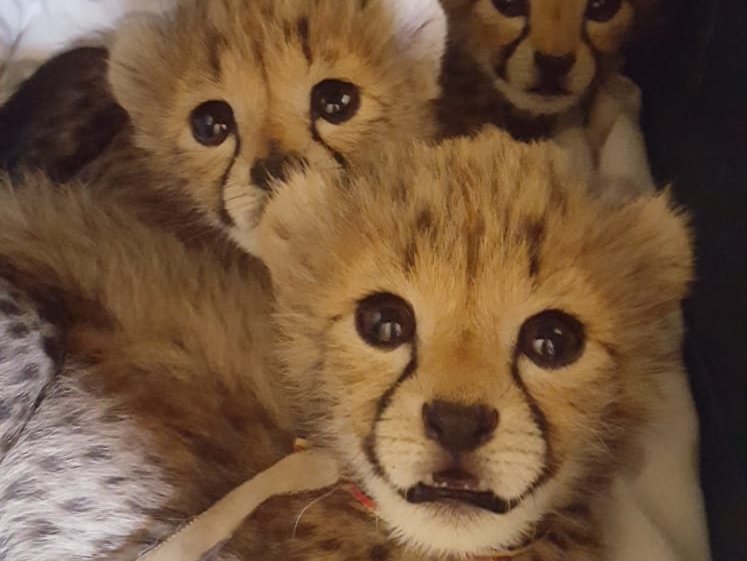 Conservation fund estimates that about 300 cubs are stolen from the region each year, with illegal pet markets in the Middle East the likely destination

Cheetah cubs said to be destined for the Middle East illegal pet trade have been intercepted by authorities in Somaliland and are recovering at a sanctuary in Hargeisa. Courtesy: Cheetah Conservation Fund

The thirst for pet cheetahs in the Arabian Gulf has helped drive poaching in the Horn of Africa to what conservationists have called “epidemic” levels.

The Cheetah Conservation Fund, which is based in east Africa, has recovered 10 cats from the hands of poachers in the last six weeks, which is much higher than in previous months.

The cheetahs were taken to a purpose built temporary shelter in Hargeisa, Somaliland, where they are being cared for alongside 13 others. It is suspected that the cheetahs were stolen from Ethiopia, northern Kenya and Somalia.

“Four were found in Hargeisa in a cardboard box. Two others were discovered in Erigavo, a remote region of Somaliland, tied together and secured to the ground with ropes around their necks.

“Our facilities are bursting at the seams and now we are bracing ourselves for what may come next.”

Three other cubs were found in a yellow plastic bin, with no food or water, and very little oxygen after a tip-off and another was intercepted in Aynabo, Somaliland. It was found “tethered to the bed of a pickup lorry, full of fleas and very scared,” said Dr Marker.

She estimates that about 300 cubs are stolen from the region each year, with illegal pet markets in the Middle East the likely destination.

Dr Marker said that the growing cheetah poaching crisis in the Horn of Africa is becoming “an epidemic”.

Cheetahs are fragile animals and unsuitable as pets so they tend to only survive for a few months when held in illegal private collections. Because of their short lifespan, the demand for new cheetahs is constant.

The CCF has been tracking incidents of cheetah smuggling since 2005, assisting authorities with confiscations whenever possible. Hundreds of incidents have been recorded, involving more than 1,500 cheetahs or cheetah parts.

Less than 20 per cent are known to have survived after they were found and more than 30 per cent have been confirmed dead.

Once found, the cubs are taken to CCF’s cheetah facility where they are given food, medication and care by a team of volunteer vets and dedicated animal caregivers.

But the sanctuary is struggling to keep up with demand and is in need of support to continue helping to protect the species. Its monthly running costs have spiralled to about US$10,000 (Dh36,700).

Most of the trade in live cheetahs occurs between east Africa and the Arabian Peninsula, where cheetahs are popular pets across the Gulf States and are regularly spotted for sale via social media in the UAE.

The Ministry of Climate Change and Environment said the UAE is strongly committed to tightening controls on the movement and trade of endangered species through its airports, roads and seaports.

In addition to setting a solid legislative foundation, the ministry said the UAE has taken concrete steps to curb the illicit trafficking of wildlife species.

The CCF has been operating a cheetah safe house since 2017 to assist the Somaliland’s Ministry of Environment and Rural Development and its wildlife officers as they intercept stolen cubs. They are smuggled through Somaliland to ports and then into Yemen and elsewhere.

In September, two cheetah smugglers were prosecuted in Somaliland – it was the first wildlife-related criminal conviction in the country.

“We estimate that the number of cubs poached from the Horn of Africa each year is around 300,” said Dr Marker.

“We need help to end this crisis before it is too late. At this rate, wild cheetahs will soon become extinct in these locations.”

Cheetahs are categorised as vulnerable under the International Union for Conservation of Nature – one step below “endangered”. Fewer than 7,000 are thought to exist in the wild.