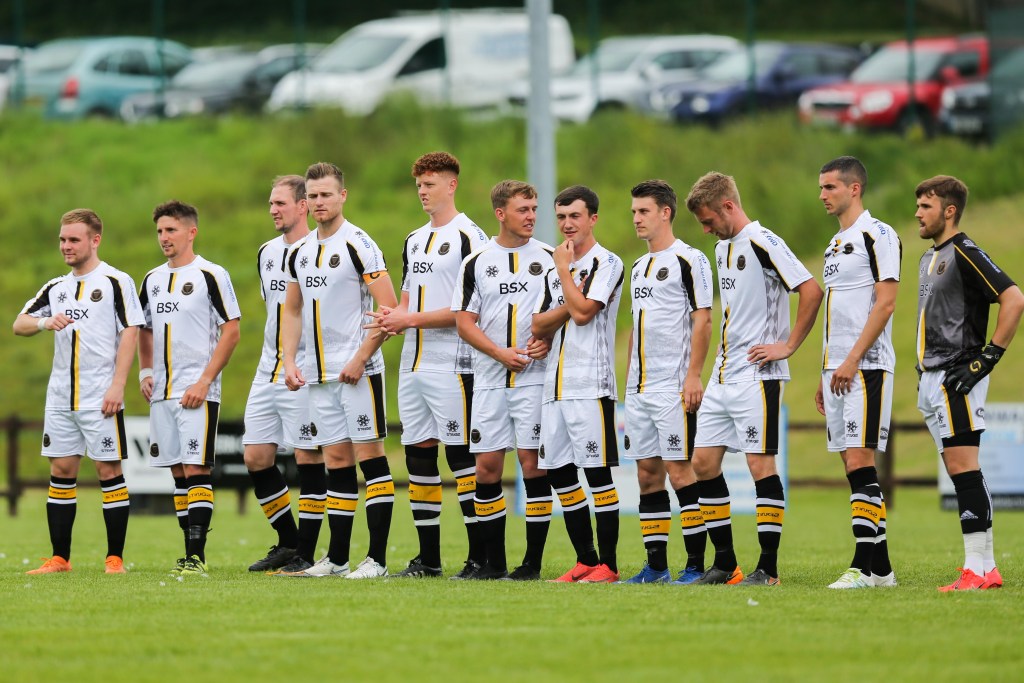 “The road to the 2020 CONIFA World Football Cup in Somaliland is now fully underway and we trust that, as the support grows, so does our belief we can win it!”

Kernow FA played their inaugral international soccer match on Saturday, running out 5-0 winners against a team from the Somalian diaspora in the UK, Barawa.

The squad was picked from the best Cornish born players available, mostly from teams in the South Western Peninsular League, including Bodmin Town, St Austell and Mousehole.

Team captain Jake Ash told us what playing for Kernow meant to him “Wearing the badge and being captain today will be something I will cherish for a very long time.

To be recognised by the gaffer to be the best players in the league is definitely something I’m excited to be part of and it’s exciting to see where the journey goes to – the sky’s the limit.

Cornish players from higher leagues or even professionals would also be eligible to join the squad, if their clubs agree to release them for ‘international duty’.

Guest of honour on Saturday was singer songwriter Harry Glasson and a version of his famous song ‘This is My Cornwall’ was used as the anthem at the start of the match.

Kernow FA have joined CONIFA – the Confederation of Independent Football Associations, and have an open ambition to play in the the next CONIFA World Cup, to be held in Somaliland, Africa next year.

CONIFA is for all associations outside of FIFA, supporting football teams from nations, de-facto nations, regions, minority peoples and sports isolated territories.

It was founded in 2013 ‘to contribute to the enhancement of global relations and international understanding’ and held it’s first World Cup in 2014 in Ostersund, Sweden.

Saturday’s guests Barawa hosted the last tournament, held in London, which attracted teams from such diverse corners of the world such as Tibet, Tuvalu, Abkhazia, Padania, Szekely Land, Western Armenia and the United Koreans in Japan.

Jason Heaton is Chair of Kernow FA. He wrote in his programme notes “It has taken two years of extraordinary team effort to get this far but what a journey – and the best is yet to come!

We hope you find it fully representative of Cornwall’s culture, heritage and passion for football.”

“The road to the 2020 CONIFA World Football Cup in Somaliland is now fully underway and we trust that, as the support grows, so does our belief we can win it!”

Co founder of Kernow FA Andrew Bragg said “The big picture is to try and qualify for the 2020 World Cup in Somaliland.

It would be amazing to take Kernow to that event. It’s not something that has been achieved or even attempted before. But with the people and the committee behind us it’s something that could be a real possibility”

16 teams play in the tournament and Kernow will have to earn the raking points to be able to be invited. Saturday’s victory counted to that total and Kernow could accrue more at a tournament this weekend in Yorkshire as they aim to win the Atlantic Heritage Cup against Ellan Vannin (Isle of Man) , Parishes of Jersey and Yorkshire.

The CONIFA AGM is to be held in January 2020 and it is at this meeting that the participants for the World Cup will be decided.

Barawa is a port city in eastern Somalia, a country ravaged by civil war for the last 30+ years.

“In Barawa, we are peaceful people” Haji Munye, Chairman of Barawa FA told us . “We are more academic, we try to be pioneers, that’s what we are known for. So in Barawa there was peace, even whilst Somalia was at war we had a certain amount of peace. So what people used to use Barawa for was, as the different tribes moved across Somalia, they would stop off in Barawa because it was peaceful. But they would literally terrorise Barawa. eg Rape the children and women, beat the men, burn us. So we have had a serious ordeal in terms of oppression. Al-Shabab have been there, the Islamist militants, and when they took over Barawa they created this whole new Sharia law – yes we are Muslims but we don’t live by that, you know what I mean?

But the football we are playing here and the work we are starting to do back home is creating hope, it’s part of the rehabilitation process. We want peace, we want to go back home. It’s uniting everyone worldwide in supporting this team and being part of CONIFA has given us an unbelievable platform”

Highlights of the match can be found here :

Somalia Actors Need to Compromise for a Better Morrow