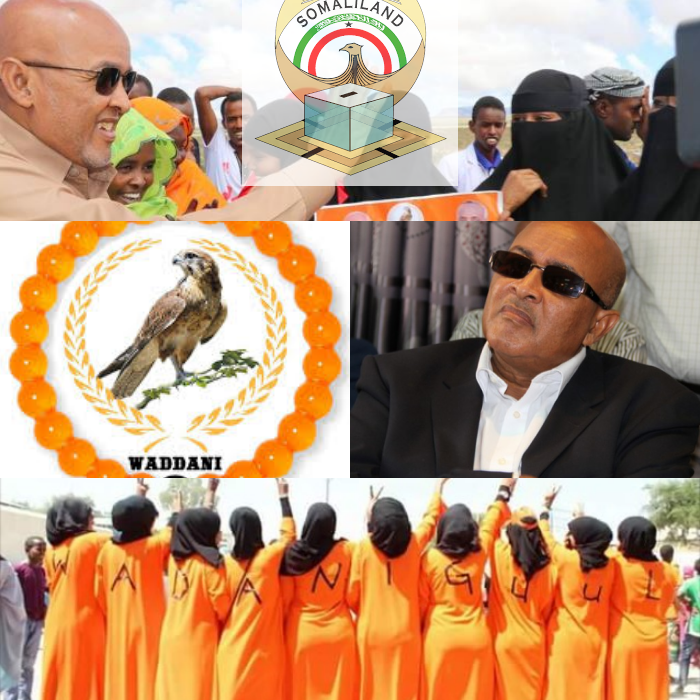 After a long absence from the political scene, the Madasha group held a press briefing under a shaded tree somewhere in Hargeisa. During the briefing, Madasha spokesman, Mr. Guure, has threatened if the three main political parties fail to hold legislative elections by 2019; extreme measures could be taken to solve the current political crisis. He even suggested convening a national convention, similar to the Borama convention in 1993, for Somaliland clans to decide the future course of the country. He then compared the current crisis, which is a Wadani manufactured crisis, with Siad Barre’s coup against a democratically elected Somali government in 1969, and the short tenure of Mr. Tuur’s presidency.

It seems Mr. Guure is a Wadani supporter on steroids disguised as an elder man. We know the current manufactured political crisis started after Mr. Irro refused to concede his defeat in 2017 presidential election. His supporters still blindly believe his false narrative that the election was rigged because the clan-based political system.

Irro wants to hold the country hostage until his demands are met: To declare him the winner of the 2017 presidential election.

In an ideal political climate, you would have expected an opposition party, out of power, to move with greater urgency to demand holding legislative elections in order to control the legislature and hold the Bihi administration accountable. But Mr. Irro has failed to do so because of petty mindedness on 2017 election results.

While using Madasha as a conduit, these foreign sponsored clan-based operatives are very determined to take down a president elected democratically by the majority of Somalilanders. But the silent majority will not just sit idle at any attempt for a regime change or a coup against Mr. Bihi because Somaliland people have spoken and He is our duly elected president until 2022.

Who are they to tell us for convening a national convention on the future of Somaliland? Madasha are a fine, patriotic group, but they are un-elected, self appointed elder men who do not represent Somaliland people.

Madasha also does not understand that the responsibility of the elections solely belongs to the legislature and not to un-elected political party hacks or the electoral commission. The party’s main responsibility is just nominating different candidates running for elected offices. Because the legislature has failed to do its constitutional  mandated duty to pass laws—Somaliland had  became a semi  lawless country—to the  point, where  un-elected  political party officials, electoral commissioners ,  or even clan elders became de-facto law makers on how,  place, time and the manner election is conducted.

After we had repeated election delays in 2009 and 2015, unconstitutional term extension for all government branches, including local governments, a functioning and effective legislature would have passed election laws regarding the time and the manner of elections, and would have held the executive branch accountable. Instead, Speaker Irro had made the legislature a part of executive branch, and a vehicle to promote his own interests to make him rich by selling legislative agendas to special interest groups.

Irro was speaker of the Somaliland legislature for over 12 years; his aide, Col. Jirdeh, was also a member of the legislature for 25 years. They had failed not only to rein in the massive corruption, cronyism and looting of public lands and properties during the Riyaale and Silanyo/Hersi administrations, but also to pass meaningful election laws to curb election delays.

But President Bihi is cracking down on the corruption of the previous administration and cutting off hush money to the ‘exploiters and sowers of division.’ Why is Mr. Guure upset for Somaliland to have an administration taking its fiduciary responsibility seriously to protect public funds?

I agree with Madasha that Somaliland desperately needs not only to reform but to open our political system. What we have now is one party monopoly, which is not working for ordinary Somalilanders. All three political parties are united against the formation of more political parties that are based on political platforms and ideas and not on clan identity. We need more freedom. Mr. Bihi should welcome the idea of allowing more political parties in the country because we cannot continue to have the Wadani party holding legislative elections hostage with frivolous demands.

Instead of various SL clans holding gatherings, which could sow seeds of mistrust and division, we should have a constitutional convention to amend the short comings of our constitution to address the political ills of the country on a later date after the legislative elections.

Our leaders must put aside their petty political difference because a poor, unrecognized entity like Somaliland can’t afford more election delays. We must hold the legislative elections by not later than December 2019.

We appreciate Madasha’s services and contribution to the country, but in this juncture; Madasha has failed to address the root cause and the party responsible for the manufactured political crisis in Somaliland. I would suggest to them to go into retirement and let a new generation of leaders to step in.

Ali Mohamed
Founder and Editor
Gubanmedia.com, an online source of news and commentary about the Horn of Africa
Lewis Center, Ohio