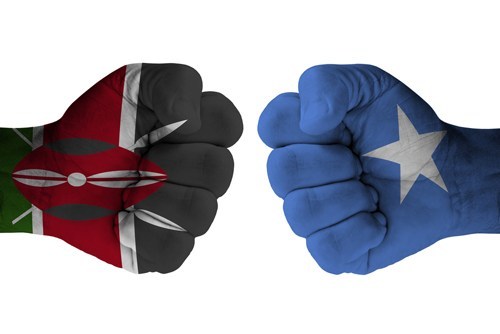 The maritime boundary dispute between the West African nations of Kenya and Somalia has increasingly led to the deterioration of bilateral relations between the two neighbours. The bone of contention between the two nations is a narrow triangle off the coast of Africa, in the Indian Ocean, about 100,000 square kilometres (62,000 square miles) in areas. The region contains huge oil and gas reserves but its ownership has been a bone of contention between Kenya and Somalia.

Kenya claims the disputed region on the grounds since the boundary of the region lies line parallel to the line of latitude, it gives the country a larger share of the maritime area. However, Somalia disagrees to such claims and wants the boundary to extend to the southeast as an extension of the land border.

The relations began to deteriorate in August 2014 when Somalia sued Kenya at the International Court of Justice at The Hague, Netherlands, for unlawful operations in her maritime territory. In its judgement of February 2, 2017, the ICJ decided to adjudicate the maritime dispute after negotiations between Kenya and Somalia yielded no positives. Kenya wants the dispute to be resolved through negotiations. Lawyers said the maritime boundary is along a parallel of latitude as was decreed in the Presidential Proclamation of 1979. Somalia says the boundary should be at an equidistant line and that Kenya’s oil exploration activities in the disputed area are unlawful. On May 20 2019, Somalia passed a new Petroleum Law setting out revenue-sharing measures between Somalia’s federal and regional governments, a significant development towards offshore exploration activity.

On the same day, two Somali Senators and a Minister with diplomatic passports were denied entry to Kenya, thus aggravating the tensions further between the two nations. In all probability, the Kenyan decision to refuse entry to Somali government officials was a retaliatory measure. Somalia then directed all non-governmental organisations operating in Kenya to relocate to Somalia or cease operations.

According to analysts, Kenya claims the disputed region or else it is concerned about loss of 26 per cent of its Exclusive Economic Zone (EEZ) which is about 51,105 square kilometres and also 85 per cent or 95,320 square kilometres of the continental shelf beyond the 200 nautical miles EEZ and also access to international waters It is likely that Kenya intends to pressure Somalia into reaching an out-of-court settlement.

Kenya issued exploration licences for blocks L21, L22, L23, and L24 in 2012, which Somali authorities say lie within the disputed area. If the ICJ rules in favour of Somalia, Kenya may be contractually required to compensate companies it awarded the blocks to, including Eni Spa.

An out-of-court settlement would likely help Kenya to avoid compensation payments while also removing the possibility of an ICJ ruling wholly in Somalia’s favour. The Kenyan authorities have already exerted leverage over Somalia in recent months, which is likely to increase in light of the Petroleum Law.

For instance, an Emissary was sent to Hargeisa in April 2019 to establish a foreign mission in the self-declared independent Republic of Somaliland (Somalia), undermining Somalia claims of sovereignty over the area. According to a leaked United Nations document, Kenya is also seeking to close the Dadaab refugee camp, home to around 250,000 refugees near its border with Somalia. The government of Kenya previously announced the closure of the camp in May 2016, but the High Court blocked the directive in 2017.

In another major development, on June 11, Kenya shut down the Kiunga border point in Lamu County as Kenyan authorities argued they were blocking routes for smuggling, terror merchants and human trafficking.

Ethiopia has offered to act as a mediator in the ongoing maritime conflict. Ethiopian Prime Minister Abiy Ahmed proposed that Kenya and Somalia deal with their maritime dispute as an independent issue, in order not to stall other projects affecting the three countries, including a security transition programme in Mogadishu. However, Kenya and Somalia still differ on mechanisms to resolve the issue.