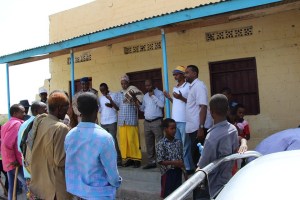 The Ministry of Energy and Minerals has officially completed the third phase of the oil exploration exercise in Sahil region.

Mr. Abdurrahman Abdeeq Muhumed, the director general in the ministry of energy and mineral resources accompanied by other top officials in the ministry toured Naqdhibiijo, Ceeldaanyeer, Biyolay, Burco Kibir, and xidxid districts where exploration work has been going on for the past month.

The director of oil department at the ministry energy and mineral resources Mr. Ahmed Iidaan Adam-adde said that the oil exploration exercises undertaking which takes time and after the completion of ground which we used seismic vehicles which are used in sending seismic waves into the ground and aerial exploration. After that, we began the third phase that consists of soil sampling the results of which will be used to compile final reports on the findings of the exploration activities.

The director general said, “Ministry of energy and mineral resources is playing her role to make sure all goes well as it is mandated by the President of the Republic of Somaliland to oversee this oil exploration exercise become a success. Secondly, I would like to thank the local populace for their cooperation which has being vital for the work we have been doing in the area.

“The extraction of oil will bring many benefits to country and much needed job creation, moves towards middle-income status, and delivers to the large majority of citizen’s significant economic, health and social benefits now and in the future”, He added.

Mr. Sacad Essa , local administrator said , “I would like to use this opportunity to continue urge fellow Somaliland citizens to support this Ministry of energy and minerals and the government in its efforts to develop our natural resources that God endowed us with for the common good. No problems occurred during the duration of the work.

The Sahil police boss said,” We urge our citizens to be patient in realizing our dream as a nation to become a country that benefits economically from its natural resources.

Local elders said that they shall continue supporting the ministry of energy and minerals resources in its efforts.