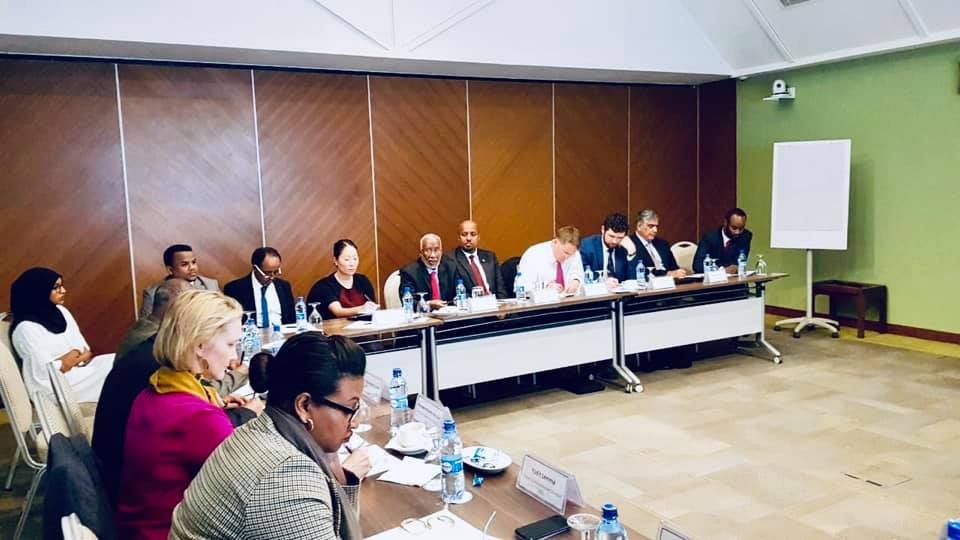 Villa Somalia’s absence from a meeting it previously agreed to, despite a formidable participation of the international community, is a preview of intent – observers note

The weak, internal community supported government at Villa Somalia, Mogadishu, chose to absent itself from a meeting it previously agreed to with the organizing Geneva-based international agency.

The meeting between the two sides was to have been facilitated by the Center for Humanitarian Dialogue. The agenda was spelled out by the heading which read ‘Consensus Building Meeting for Somalia-Somaliland Dialogue Process’, and was slated to open at 9:30 in the morning of Tuesday, 25 June 2019, at the Windsor Golf and Country Club Hotel, Nairobi, Kenya.

The full agenda was as in below-shown copy.

Despite the absence of the FGS, the meeting opened on scheduled time and Somaliland presented its case on an open field taking the day by default.

His Excellency the Foreign Affairs minister of the Republic of Somaliland, Hon. Yassin Hagi Mohamoud Hiir ‘Faratoon, led the Somaliland side to the deliberations on the talks of Somaliland and Somalia which had been planned to build a consensus on upcoming meets.  An impressive roster of the International community that included The USA, EU, Sweden, Turkey, IGAD and the UK special envoys to the Horn of Africa as well as other International community partners attended.

Ambassador Bashe Omar, head of the Somaliland Mission to Kenya, called the absence of the Federal Government of Somalia regrettable.

“Somaliland considers it a matter of great regret, that the FGS has not taken the opportunity to continue our dialogue,” he said.

Ambassador Omar further observed that the Somalia cancelation of participation at the last minute on the pretext that Nairobi was not a suitable venue for the dialogue bespoke ‘the chaos and lack of commitment to genuine dialogue which categorizes Villa Somalia’s approach to peaceful cooperation with Somaliland’.

Somaliland always insisted that it had nothing to hide and that its case was not only for Somalia to deliberate but for the whole world to witness, explore and re-consider and, as such, the international community must participate and moderate the talks between the two sides.

Somalia, on the other hand, did not want the world to see or hear what the core issues to be discussed were or that it be rapped on the knuckles where it veered away from the proceedings or clouded the fundamental issues. Countries such as Turkey, a vast ally and a ‘development partner’ of Mogadishu was acceptable to Mogadishu.

The Chief of Staff of The Office of the President, Federal Republic of Somalia, at Villa

Somalia, Dr Nur Dirie Hersi ‘Fuursade, tweeted the thoughtless stand of the federal government, probably on behest of its President on the eleventh hour that Somalia was not going to be party to the Nairobi meeting about to open as scheduled.

That was another alarming glimpse into the disarray evident at the FGS political leadership and its grip – if any – on the realities of shifting balances at both regional and international levels. It showed, too, that Somalia had no intention of resuscitating the sputtering talks it had started with the 28-year old de facto republic in 2012.

The official @VillaSomalia account of the  FGS President, Mohamed Abdullahi Farmajo, said not a word about the meeting. Instead, it retweeted Dr Fuursade’s Tweet  as below:

#Somali govt representatives will not participate in the expected Consensus Building Meeting in Nairobi. However, we would like to confirm that the govt is committed to engage in constructive dialogue with #Somaliland when a suitable venue, agenda and participants are agreed.

An apt response from an observant Tweeter retorted:

No problem. The meeting went on without you anyway… pic.twitter.com/44BzVlw1Ug

Somalia President skipped another meeting the Prime Minister of Ethiopia, Abiy Ahmed, arranged between him and his Somaliland counterpart, Musa Behi Abdi, last year – on the last minute, too.

Since the talks between the two sides to decide on key issues relating to what a relationship between the erstwhile union partners would look like was kick-started in London, the United Kingdom in 2012, the two met more than half a dozen times in Turkey, Djibouti and the United Arab Emirates.

Observers contend that if Somalia only honored salient points reached in 2014 in Istanbul and Djibouti, the two sides would have made great headway in their talks by now.

Somalia, instead, decided to disrespect all – ALL – outcomes reached at the meetings.

It is now on the lap of the international community to call a spade a spade and end the unfair burden placed on over 4 million Somaliland nationals impacting on their security, development, education, health, travel, bilateral and multi-lateral relations with the outside world and in regard to, virtually, whether they exist or not exist.

Below is a sample of Tweets reporting the meeting and exchanging views:

1/3
Somaliland delegation led by the Foreign Affairs minister, Hon.Yassin Hagi is pleased to have attended the deliberations on the talks of Somaliland and Somalia with the International community that included The USA, EU, Sweden, Turkey, IGAD and The UK special envoy….. pic.twitter.com/opZqhAXHQ0

2/3
…..to the Horn of Africa as well as other International community partners in Nairobi and presented its case while Somalia has NOT attended the meeting due to the complaint about Nairobi NOT being a suitable VENUE for the dialogue…. pic.twitter.com/uGOVya0maa

3/3
Somaliland considers it a matter of great regret, that the FGS has not taken the opportunity to continue our dialogue and this speaks to the chaos and lack of commitment to genuine dialogue which categorizes Villa Somalia’s approach to peaceful cooperation with Somaliland pic.twitter.com/7GbgaHxa0V

#Somali fed govt thought they could cancel the meeting in #Nairobi by tweeting their non attendance BUT the meeting still went ahead and #somaliland was giving the platform ….👏🙌😂 pic.twitter.com/J8zK9Xh3VP

Only ones that humiliated is Somalia! #Somaliland showed up the international community showed up. This is not a time for petty party politics. https://t.co/yuq7hR6Y5g

This clearly demonstrates Somali's proverbial perfidy and breach of trust with respect to any longterm lasting political solution on Somaliland and Somalia political stalemate.#Somalia needs credible govt that can negotiate with #Somaliland.@M_H_Ingiriis @biddeyare @IbrahimAbdi20 https://t.co/BQyVl0Fcqw

Kulmiye turned the talks between #Somaliland and Somalia into a public relations party to please Western countries but without discussing difficult problems https://t.co/N5mAUuuVtX

Kulmiye turned the talks between #Somaliland and Somalia into a public relations party to please Western countries but without discussing difficult problems https://t.co/N5mAUuuVtX