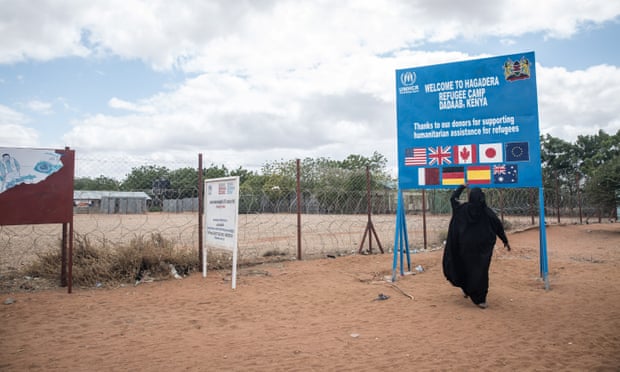 Four years ago, Asha made what seemed like an impossible decision. She knew the journey from Kenya’s Dadaab refugee camp back to her native Somalia was risky. But after an attack by the Somali Islamist group al-Shabaab, the Kenyan government had threatened to close the vast, sprawling camp for security reasons. Asha feared for her family’s safety if Kenyan soldiers moved in to evict them.

“I wanted to be gone before the rough-up,” recalls Asha. “I didn’t want my girls raped by [the] military forcing them on buses. I wanted to protect myself too.–

“We were looking for a way out.”

In Dadaab, all they had was a makeshift shelter on a patch of sandy ground. In an isolated region, there was little opportunity; Asha was tempted by the money they would receive to restart their lives. Under an ongoing voluntary repatriation scheme, the UN refugee agency (UNHCR) was offering returnees about $80 (£62) a person, as well as the first flight of Asha’s life. To Asha and her children, it seemed like a fortune.

However, even going back to a warzone involves greasing some palms, she says . Asha, whose name has been changed at her request for fear of retaliation, claims she had to hand over one family member’s repatriation money to be accepted for return, even though the UNHCR says all services are free. She says she paid it in two instalments: an initial amount at a UNHCR field office, the rest to an interpreter working with the agency.

Asha’s experience is echoed by dozens of refugees who spoke on condition of anonymity for this investigation. They say corruption is endemic in east African refugee camps and implicate both UNHCR staff and employees of partner organisations. Refugees at the camp have fled war or dictatorships in search of security, but many say everything – from gaining refugee status and receiving food rations, to being chosen for resettlement to another country or even repatriation back to a warzone – involves the expectation of a bribe.

“The overwhelming majority of our 16,000 personnel are deeply committed professionals, many of whom are working in difficult environments, sometimes risking their own safety,” said the agency in a statement.

“As with other organisations, we are not immune to risk or failure on the part of individuals. This is why we have a solid safeguarding structure, which has been further strengthened in the last two years, and which we continuously seek to improve.”

Between 2014 and January 2019, nearly 80,000 refugees returned from Dadaab to Somalia. In the same period, cash grants for returnees rose to between $150 and $230 for every family member – some handed over shortly before departure, the rest following arrival in Somalia.

In March this year, the Kenyan government once again announced it was closing Dadaab, giving the UNHCR a six-month deadline and asking them to “expedite relocation of the refugees and asylum-seekers residing therein”. Somali refugees say they’re certain the announcement will lead to an increase in the exploitation of people deciding to return.

In interviews at the camp in October 2018, 11 refugees alleged that UNHCR staff and people working with them demanded bribes for repatriation of between $20 and $200 a person for a large family.

“To me it sounds like a curse for an agency worker to take money from a poor refugee going to a warzone,” says a member of the Somali Bantu ethnic group, claiming he knows people who have paid and is considering it himself.

“They charge $20 per person. Once you pay that, you get your name posted,” he says, referring to a list announcing who’s travelling next.

Another mother says refugees even hand over money on the airstrip, right before boarding Somalia-bound planes. A middleman will pretend to escort them, lifting their luggage and taking the cash. If they don’t pay, the middleman will “create chaos,” she says – “[he will] say there’s a problem and bring them back”.

Asked about accusations of bribery in the repatriation programme, UNHCR Dadaab’s repatriation officer Woja Apuuli said he had not heard of this happening, and did not see why it would be necessary. “All services at UNHCR are free of charge,” Apuuli points out.

Refugees who witness misconduct can lodge complaints, which are then investigated, says UNHCR spokesperson Cecile Pouilly: “In Kenya, for instance, refugees can report misconduct of any staff member of UNHCR, a partner or a contractor, by email, by filling in a webform, by using complaints boxes that are available at all UNHCR offices or by calling our toll-free helpline.”

Over the past two years, Donald Trump’s travel ban has shut down the possibility of resettlement for Dadaab’s Somali refugees, thousands of whom were in the process of being considered for relocation to the US.

Meanwhile, the World Food Programme has drastically cut rations in Dadaab in recent years, citing insufficient funding. As they grow increasingly desperate, many refugees are entering into debt to feed their families.

“For the last three years, there’s no resettlement [to western countries],” says another single mother. “Repatriation is the most corrupt department, actually.”

Signs placed around Dadaab say: “Return is your choice”. But many refugees feel their days in Kenya are numbered.

“Basically, we are in an open jail,” says one man.

A Bantu refugee who works as a UNHCR contractor says he has reported concerns about exploitation in the repatriation process. “The biggest problem is if you complain to UNHCR about this corruption you will have problems,” he says, adding that refugees worry they’ll be cut off from services.

Asha’s 2015 return to Mogadishu, Somalia’s febrile capital, was short-lived. Within a year of her arrival, she was injured by shrapnel from a bomb that exploded near her house. Like more than 2,000 other refugees in the past five years, the family returned to Dadaab. But the feeling of insecurity there has left them with no hope and no chance for a future.

Seated on a woven mat in the shade beside her shelter, Asha describes how her hungry children only get two meals a day – porridge in the morning and a meagre dinner at night – and says the corruption she has witnessed makes it feel even more unfair. “UNHCR is an international organisation and I fear it’s not aware about this, not fully,” she says. “This is greedy individuals and opportunists who don’t care about human suffering and want to get rich on poor people.”

Asylum for Sale was produced in collaboration with Journalists for Transparency, a project of Transparency International, and 100Reporters, a US-based nonprofit news organisation