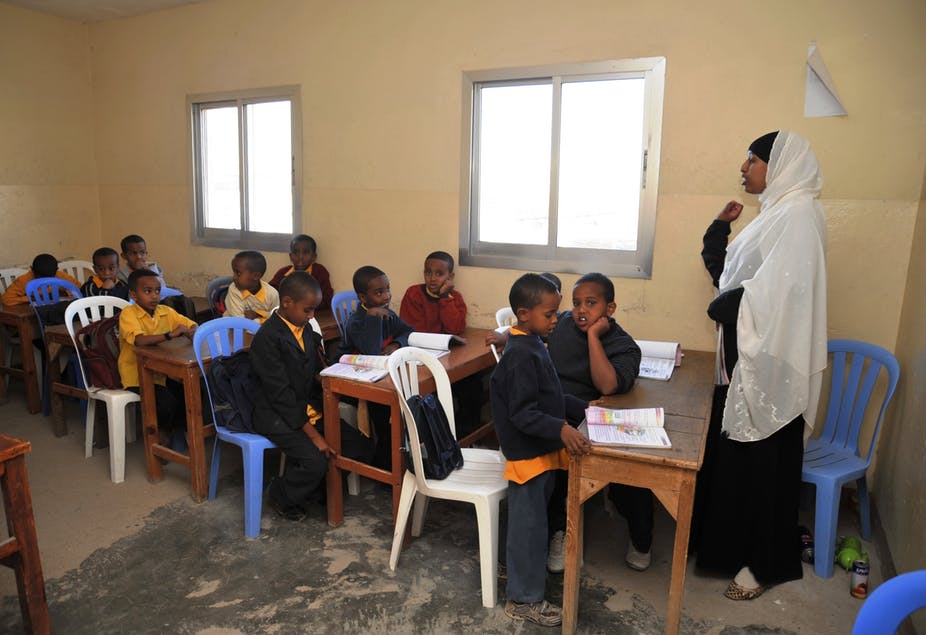 In 1991, following a civil war that led to the collapse of the Somali Democratic Republic, the northern part of the country declared itself as the Republic of Somaliland. Though it still lacks recognition from the international community, Somaliland has many characteristics of a state, such as a parliament and an army. It’s also generally been highlighted as a rare success story in the Horn of Africa. The 3.5 million people that live there live in relative stability. But little is known about how the country’s public services function and are organised.

In a recent article, we try to address this gap by focusing on how the primary education sector works.

During Somalia’s civil war in the late 1980s, more than 90% of schools were destroyed. But education in Somaliland went on to develop and continues to be delivered. Today, there is a whole education system with public and private kindergartens, primary and secondary schools and universities. There are also vocational and Koranic schools.

The number of primary schools, the focus of our study, has grown steadily from virtually zero in 1990 to 935 in 2014.

But how does it keep them going? Somaliland has few economic resources because, due to its unrecognised status, it’s unable to receive bilateral aid and it also has a weak tax base. In addition to this, security remains a top priority for the state authority, leaving little for other key public services.

We found that non-state actors – like the diaspora and international non-governmental organisations (NGOs) – are central to the delivery and expansion of the education sector.

This doesn’t mean that the state is redundant. It continues to be important for what the non-state actors do – like setting national examinations and providing salaries for some of the public school teachers through a government payroll.

The issue is that this hybrid system means that non-state actors have the power to decide whether state policies are implemented or not. It also means that personal connections between members of the diaspora and officials in the ministry, rather than clear guidelines, can play a role in determining outcomes – like whether a school is recognised or not.

The importance of non-state actors

Our study involved eight months of qualitative field research carried out mainly in Hargeisa, the capital of Somaliland, between late 2016 and early 2017. During this time we carried out 150 semi-structured interviews with donor representatives, teachers, government officials, school inspectors, headteachers, members of community education committee, and businessmen.

We saw how central the diaspora and NGOs are in rehabilitating, building and running schools.

For instance, in some towns or neighbourhoods new schools were built because networks of people from abroad had family living there. About one million Somalis live abroad and their remittances are widely known to have supported relatives “at home” over the past two decades. The same goes for schools. In rural areas, schools are usually set-up by diaspora groups or international donors. All 20 public schools that we visited during our fieldwork in Hargeisa were funded by both the government and diaspora.

International Islamic charity organisations, like as Direct Aid and Munazzamat al Dawa al Islamiya, and local businessmen also develop the private education sector by importing a range of curricula and school books from elsewhere – such as Turkey or Sudan – which are in high demand by parents in Somaliland.

Looking for the state

Although diaspora actors finance and manage the schools – and in fact do not need the state as such – they still look for recognition as public schools. If they are recognised under the “public” banner, this gives them access to the state’s network of international aid agencies.

The state also provides materials – like schools books – and a national framework. For instance, in 2016 the state reformed the curriculum to unify the large number of curricula and schools books that were coming in from abroad. While this reform went against the business model of private actors –- private schools are popular because of their foreign curricula –- they recognised the state as the overall regulatory authority and were involved in renegotiating the reform. Why? Because, the state provides licenses, certificates and constructs exams needed to gain access to secondary education.

But since public services continue to be produced from the ground up –- by community organisations, parents and diaspora groups in collaboration with local actors –- it is also these actors that decide whether a rule is implemented or not. For example, in 2011 the state wanted to abolish primary school fees to increase enrolment rates. But school fees are still collected today. Since the government didn’t cover running costs, which school fees previously did, it became difficult to pay the bills when schools stopped collecting fees. For this reason head teachers, parents and parental committees agreed to begin collecting fees again, against the state policy.

This shows that whether policies are implemented or not is beyond the power of the state. They are instead decided through local negotiations.