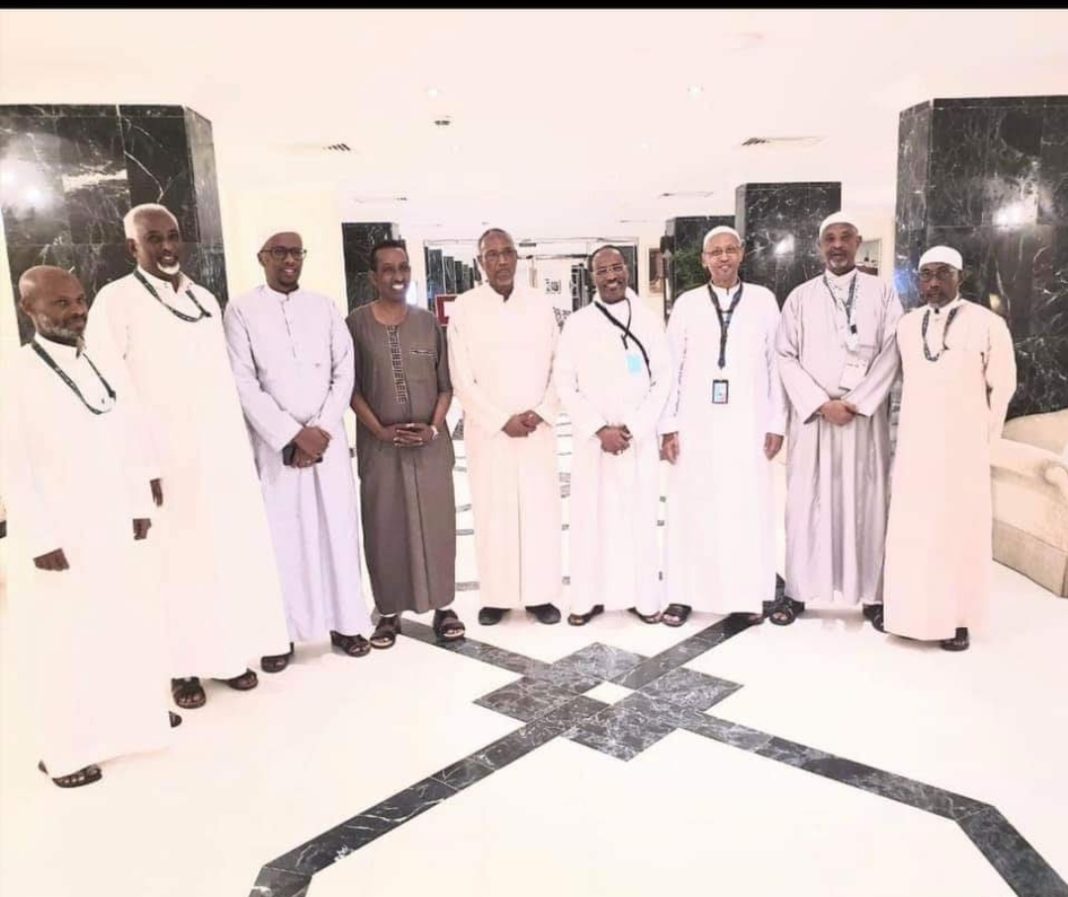 His Excellency the President of the Republic of Somaliland, Musa Bihi Abdi, stepped into a trap Somalia Ministers laid for him and his delegation during the dispensation of the Hajj obligation in the Saudi Kingdom by posing in a picture with them at Minaa.

President Bihi and the ruling party, Kulmiye, had always cried ‘foul’ loud whenever an opposition member as much as waved a greeting to a Somalia government member. he and the party – and the Kulmiye government before him – always maintained that meeting Somalia administration outside of official, roundtable talks was taboo. They argued that anyone who met them was either sympathetic to the ‘Greater Somalia’ Mogadishu preached or that they were covertly in their pay.

Musa, specifically, criticized Waddani opposition party and its leader, the ex-House Speaker of the Somaliland parliament, Abdirahman Mohamed Abdullahi ‘Irro’ for having a soft spot for Somalia, because he seemed to buck the status quo – rightly or wrongly.

This time around, the president himself was seen in a picture flanked by two of the most ardent adversaries in President Farmajo’s government against the sovereignty and re-reaffirmation of an independence Somaliland handed over to Somalia on 1 July 1960 in a bid to attract the three remaining ‘Somali States’ which, together with it and Italian Somalia, would have formed the Greater Somalia Republic.

To his left, stood Abdirahman Beileh, the Finance Minister who on many an occasion was more vociferous and more potent on his opposition against his erstwhile home country – Somaliland. Beileh played a major role in trying to convince international organizations and the UN to scrap the Special Aid Arrangement they had with Somaliland. He maintained all matters financial must pass through his ministry, and that Somaliland, to Somalia, was no different than of the Somalia federal states despite the fact Somaliland had never been part of the Somalia process.

Typical to form, Beileh immediately politicized a picture his delegation requested of President Bihi, making it appear as if the Somaliland delegation met them out of love and longing.

“The Somali people are yearning for lasting peace and reconciliation,” he wrote on his Twitter and Facebook on both Somali and English languages.

“The time is right now,” he continued to say. “Let us all commit ourselves to a final push for true and meaningful reconciliation”.

Ur confused. This was Hajj & u should have repented for the sins u committed against ur people & that has evaporated now. Somaliland is gone forever. pic.twitter.com/D7iEdfXN0g

By repeating the word ‘reconciliation’ in the same Tweet, one was left to wonder if there was a physical, military engagement raging between the two sides. But the meaning was not lost on anyone.

What Beileh intimated was that Somaliland ‘yearned’ for a ‘reconciliation’ with Somalia leading to a reunion.

Beileh was, also, known to have been one of the authors of a number of letters addressed to the Saudi Kingdom and its various departments for livestock husbandry and its import to stop millions of livestock which traditionally left Berbera port for the Kingdom meant to be used for Udha on 10 10 Dul Hijja, Eid day. The Somalia attempts which he and the Minister of Livestock spearheaded failed because the Kingdom asked Somalia if it had offices in Berbera and if not leave the livestock be.

On a blessed days, in a blessed place, meeting with Pres @musebiihi & Mohamed Kaahin, Interior Minister,& exchanging views was a pleasure.
Pres Bihi came across as a very warm, easy to converse individual, who knows the value of #Somalia @MinisterMOFA @mrbidhaan@DrBeileh pic.twitter.com/jZHb5nnvqK

Minister of State, Office of the Prime Minister. Economics of Development., Abdullahi Hamud, was not better.

“Pres Bihi came across as a very warm, easy to converse individual, who knows the value of Somalia,” he said.

Their colleague, the Foreign Minister, Ahmed Awad, however, did disagree with Beileh.

“This was a meeting between brothers at the most blessed and holiset of Muslim sites,” he said.

To dissipate any doubt – and, perhaps, respond to the viral social discussion of the meeting, he added: “We enjoyed friendly conversations – which did not include political discussions for those who may be curious”.

Happy to have met with President @musebiihi and his delegation during #Hajj. This was a cordial meeting between brothers at the most blessed and Holiest of Muslim sites. We enjoyed friendly conversations – which did not include political discussions for those who may be curious. pic.twitter.com/1bzRQIeXnJ

Typically, too, none of the members of the Somaliland delegation counter-tweeted a view challenging the Beileh ‘broadcast’ or agree with Awad’s.

This so enraged Somalilanders. Opposition parties were no exception.

” You cannot be dragging a (dry) animal hide and walk stealthily (at the same time),” he wrote in a Tweet.

The Chairman was reminding the President that he cannot keep shouting ‘foul’ at them and be doing the same thing on the side, at the same time.

Other Somalilanders were neither as kind, playfully courteous in their scathing remarks, wondering how did the President so quickly ‘reconcile’ with the avowed, arch-enemies of his country and people.

Certainly, the President has some explaining to do.

Below is a sample of tweets on the issue.

How can the President of Somaliland stand next to the very people who attempted to politicise Hajj and stop SL citizens attending this year?!

Why did the @Somaliland delegation agree to pose with these loonies?

I am sure they must have known what use they'll put the picture to.#Somalia mercenaries are the worst.

A vile, misleading and dishonest depiction of a photo which we believed was requested in good faith. @DrBeileh do not mislead the #Somali people with falsehoods. There will be no reconciliation #Somaliland marely wishes to formalise it's separation. https://t.co/HQ6bdzaH9g

You all come back to your land, if your are a real hajja stop lying you do know that you are not a represent the people of Somaliland, we have no hate to any Somali. They most respect Somaliland sovereignty & stop their interventions with Republic of Somaliland.

Correction to you! We are Hal brothers! Viva Somali people within the State Of #Somalia and Overseas #Somaliland #Puntland #Jubbaland #Hirshabelle #southwest

Your comment & it’s picture are proofing your immortality & dishonesty. Somaliland will not come back any reconciliation for Somalia. I think that you will not learn any lesson for the life. I hope if your heart & your tongue can say the truth. Not reconciled but final divorce

Mesmerized by the SLander delegation Hajjis Beyleh showed his mediocrity and politicizing pic in the sacred Haram.
Daahir yaa shamis!