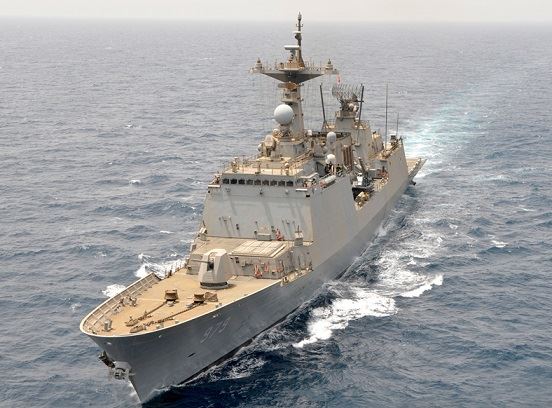 South Korea dispatched a fresh batch of troops to the Gulf of Aden for anti-piracy efforts Tuesday, the Navy said, amid speculation the contingent could also undertake missions in the Strait of Hormuz as part of a U.S.-led coalition.

The 30th batch of the Cheonghae Unit departed the southern port city of Busan to conduct anti-piracy missions off the coast of Somalia for six months, starting in September, according to the Navy.

The 300-strong contingent operating the 4,400-ton destroyer, the Kang Gam Chan, is composed of special forces, including an Underwater Demolition Team, a Navy SEAL team, Marines and Navy pilots, aimed at protecting South Korean vessels off the Somali coast and providing support to ships of other nations in nearby waters.

The routine deployment is drawing attention due to the possibility of the unit’s missions expanding to the Strait of Hormuz where the U.S. has called on its allies to forge a coalition against Iran’s military activities amid heightened tensions between Washington and Teheran.

Though Seoul has said it has not received any official requests from the U.S. on the issue, U.S. Secretary of Defense Mark Esper stressed the importance of the freedom of navigation in the region and called for international support while meeting with Defense Minister Jeong Kyeong-doo last week in Seoul.

In response, Jeong told Esper that South Korea is well aware of the significance of safeguarding the waters there, and it has been reviewing various options to protect its people and oil tankers in the region.

Reiterating its earlier position, the defense ministry said Tuesday that the destroyer is to continue the unit’s mission in the Gulf of Aden and its preparation did not consider a possible role in the Strait of Hormuz.

Ministry spokesperson Choi Hyun-soo told a regular briefing that no noticeable changes were made to the weapons system installed on the vessel and that there have not been any working-level contacts with the U.S. over the issue.

Sending the Cheonghae Unit to the waters off Iran has been cited as one of the most plausible options for Seoul to join the coalition, as it does not require additional parliamentary approval as long as the number of troops remains the same.

Regarding the matter, Iran’s foreign ministry spokesman Seyyed Abbas Mousavi told Yonhap News Agency last week that Iran does not want South Korea to participate in the coalition and called for being neutral, saying that such a move would heighten tensions in the region, which is feared to affect Iran’s partner nations, including South Korea.

The U.S. has received mixed responses from its allies regarding the plan. Britain and Israel have announced their willingness to participate, while Germany has declined and Japan has taken a cautious stance.

As the world’s single most important oil passageway that forms a choke point between the Arabian Gulf and the Gulf of Oman, the strait is the route to the open ocean for more than one-sixth of global oil production and some 70 percent of South Korea’s oil imports.

The Cheonghae unit has been deployed in the Gulf of Aden since early 2009 as part of global efforts to tackle piracy in the region.

Over the past decade, the unit had provided support for the safety of around 22,400 vessels and countered 21 pirate attacks as of end-July in treacherous waters, according to the Navy. (Yonhap)