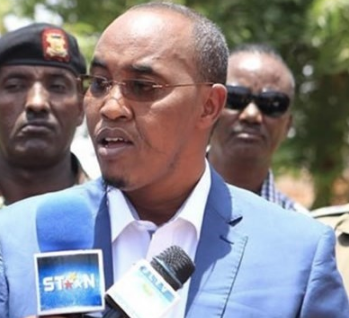 The town of Belet Hawo on the border between Somalia and Kenya erupted into spontaneous demonstrations, Sunday, to protest the arrest of a Jubaland minister at Mogadishu’s Adan Adde Airport on Saturday.

The people of Jubaland have sent a strong warning to Farmaajo that Kismaayo is not Baydhabo pic.twitter.com/XkU3adcmcA

Demonstrators held up placards decrying the arbitrary arrest and the incarcerated minister’s pictures.

Speakers said Mr Janan has played a leading role in the pacification and development of the area, and especially in and around Belet Hawa district.

They called the federal arrest of Minister Janan by Villa Somalia a ‘political abduction’ and ‘blatant revenge’.

The demonstrators also showed support for KDF presence in the area.

Abdirashid Hassan Nur ‘Janan’ was on transit at the airport where NISA operatives took him the airport whisking him off to their offices for interrogation, subsequently detaining there without further explanation.

The incident is part of an on-going row between the federal Somalia State of Jubaland and the Federal seat in Mogadishu over the re-election of Ahmed Islaw ‘Madobe’ as president of Jubaland on 21 August.

Mr Janan was arrested because the Federal Somalia Government ordered commercial airlines to reroute to Mogadishu going to or coming from Kismayu before taking off for final destinations. Hunting for Jubaland government members, traditional leaders supporting and other prominent personalities who sided with Madobe was, perhaps, one of the reasons the FGS issued the order, observers point out.

Responding to the situation, the Jubaland government called the arrest ‘unconstitutional’ and ‘extra-judicial’, calling for the immediate, unconditional release of minister Abdirashid Janan. 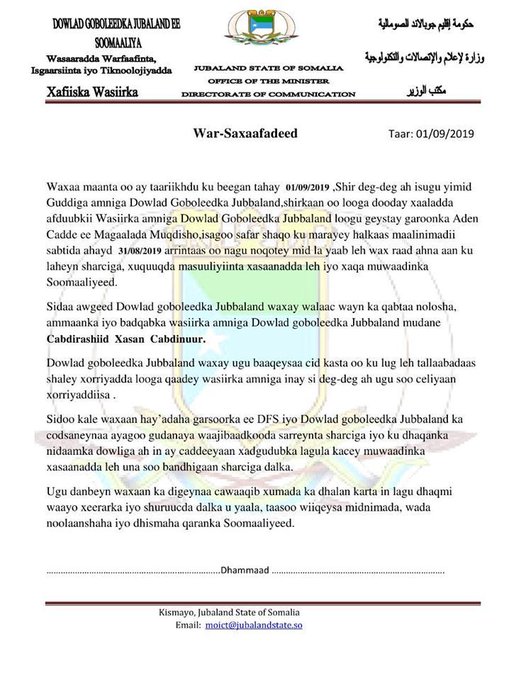