Major General Yassin Omar Dheere, the Chief Commander of the Puntland Dervishes (army) is into his third day of tours in Eastern Sanaag, Somaliland, areas.

He reached Hingalool town, only a stone’s throw from Badhan, 149 kilometres to the southeast of Erigavo, the regional capital of Sanaag,  and 231 kilometres from the nearest Somalia

General Omar Dheere’s mission, he revealed in emotional addresses he made to armed units in the areas he is touring, was to renew the clan-based claims of eastern Sanaag.

“Should we beg them? Should we bow to them?,” he hoarsely shouted at units of armed militias at Hingalool, Sunday.

By ‘they’ he meant a Somaliland that did not include, as he wished it be, his clans.

“We have to defend our integrity, our honour, our land,” he cried.

“An enemy has invaded our land, our homes. We have to get prepared to defend our land and hit back hard,” he said.

At every place he stopped, General Dheere worked up clan fervour telling his audiences that they belonged together and that they did not belong to or hold allegiance to the Republic of Somaliland.

Brigadier General Abdirizak Saeed Burale, Somaliland Army Operations Commander, promised that Puntland will not be happy with the consequences if it did not stop its charged offensive.

General Burale underlined that the boundaries of the Republic of Somaliland were well-charted and could not be disputed on the basis of ethnic residences.

“Claiming jurisdiction over another country’s land because people one was related with lived there is a well-beaten track that did not work with other African countries nor in Somalia rhetorics,” he stated.

The Op-Com added that Somaliland knew only too well the devastation and deprivation wars leave behind.

“Somaliland has never been known to beat war drums. We know how destructive wars are,” he said, contrasting the call to arms the Puntland General was calling at every stop.

“Puntland cannot even pay its army without taking on more. Army rank-and-file, personnel went five-, six months without pay. Half the number who were recently called over to the Puntland side had already discovered the reality and filed back in,” he stated.

General Burale promised the touring General, in a matter of fact voice, that he would regret the move if he continued his tour in the region.

The General, alluding to a reference the Puntland General made of an impending ‘invasion’ in the areas of Badhan by a joint Somaliland army and Al Shabaab forces, stated that the world was well informed of Al Shabaab issues in the area and which of the two areas could be suspected of covertly collaborating with Islamist fighters.

“The international community needed nobody to tell it where Al Shabaab was currently running and how Somaliland had never been associated with the movement in any way, at any time, in contrast to the prevailing situation in Puntland,” General Burale said.

He added that neither piracy nor terrorism ever took root in Somaliland nor did either establish open bases in large areas of its territory as was the case with Puntland.

For the past two years, Puntland has picked up campaigns of hostility in the area calling Mogadishu’s federal government on a number of occasions to make appearances in the area or in nearby towns to signal solidarity and support.

As is shown on below-copied map, the federal state of Somalia, Puntland has laid claims to large areas of Sool and Sanaag along clan lines disregarding all African Union, UN and international stands on maintaining colonial-drawn maps in Africa to avoid clashes and unrest. Same clans can be found living across several countries sharing boundaries as the case in Somalia, Somaliland, Ethiopia, Kenya and Djibouti. In all of these five countries, Somalis live and many of them share ethnic/clan lineages. 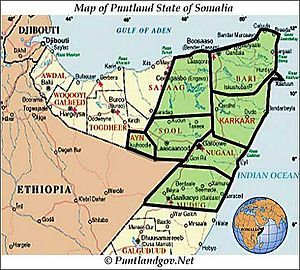 Critics believe that the AU, the UN or other international bodies abjectly failed to stop Somalia and its ‘satellite’ state of Puntland crossing over boundaries to Somaliland proper claiming clan affiliation, thus creating unwarranted territorial disputes.

The course which Puntland and Somalia have taken of recent regarding its frequent forages into Somaliland and calling residents to take up arms against their homeland augurs ill not only for the two countries involved but for the stability of the whole region.