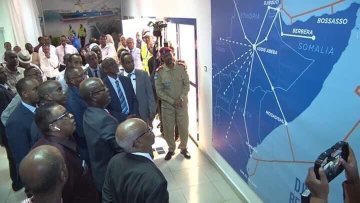 Reports are surfacing that some of the issues the two Presidents of the Republic of Somaliland and the Republic of Djibouti the latter’s jurisdiction claims over large areas within the maritime boundaries of the former.

Given the habitual ill-preparation of Somaliland government delegations in matters pertaining to nationally pertinent issues afore-discussed,  written about or disputed before that government’s term, it is doubtful that President Bihi’s delegation was prepared to weather the wily moves of a seasoned grabber – President Ghuelleh.

A good example of how Ghuelleh could easily score over the Somaliland delegation, hands tied behind his back, was evident in the map he presented them at the free zone – a situation that raised the hackles of all Somalilanders everywhere.

The ‘official platitudes offered by way of explanation of visit was far from helpful to say the least.

Told you #Djibouti is not only an enemy but is routing for #Somalia its toddler-leaders!

President @musebiihi should have walked past this picture at least.

The word 'Somalia' is stencilled over the #Somaliland map – obviously to score a point! https://t.co/KLKLkgFy6C

The visit to a country that had openly stood in the way of Somaliland’s quest of redemption to a mistake it made in 1960 – its independence, had tried to close its ports, block FDI initiatives, and is hand-and-glove with Somalia, was distastefully noted by the public. The outcome spelt ou so many things unsaid which again raises public suspicion.

The article, copied below, which has been published in May 2017 gives one a bird’s eye view of how far-reaching Somalia and Djibouti’s diabolical designs over Somaliland’s sea and land rights are.

Conflicting maritime claims in the Gulf of Aden

On 11 February 2017, the Government of the Republic of Somaliland, which regards itself as the successor state to the British Somaliland protectorate and has de facto functioned as an independent entity since 1991 (albeit with limited international recognition), sent a letter to the UN Secretary-General signed by President Silanyo, claiming maritime rights including a 200-mile Exclusive Economic Zone (EEZ).

Stressing that this move would ‘enable Somaliland to better police maritime territory and combat crime, including in relation to customs, immigration, and people and arms trafficking; protect natural resources, such as fisheries and oil and gas deposits belonging to the people of Somaliland; and support international efforts to promote peace and security in the Gulf of Aden’, the Foreign Ministry of Somaliland announced that it will submit in due course the geographical coordinates and a chart of its maritime zones.

This appears to be one of the latest of a series of recent developments affecting a number of potential, or nascent, maritime disputes in the Gulf of Aden, a zone already deeply affected by major security threats including large-scale piracy (highlighted again by recent hijackings, despite the efforts of the EU launched its first ever maritime military operation in the area, despite the continued deployment of international naval forces) and illegal fishing.

Somalia itself had claimed an EEZ in 2014, and deposited with the UN DOALOS a list of co-ordinates defining the outer limits of this zone. It is striking to note that Somalia’s EEZ encloses several islands pertaining to Yemen (see Law of the Sea Bulletin  No. 85, 2015).  This  proclamation  had  prompted a protest lodged with the UN Secretary-General by the authorities of Somaliland, which had insisted that ‘Somalia cannot and does not exercise jurisdiction or physical control over the waters and continental shelf off the coast of Somaliland’ (press Release, 7 August 2014). Somalia’s EEZ proclamation of 2014 has also met with a recent protest by the Republic of Djibouti (Letter to DOALOS, 31 January 2017), in which the latter challenges the geographical coordinates used as baselines from which Somalia’s claimed EEZ is defined, and asserts that such EEZ extends to waters under sovereignty and jurisdiction of Djibouti. The Republic of Yemen had earlier protested Somalia’s EEZ (Letter to DOALOS, 25 July 2014), noting that it violates ‘Yemen’s territorial waters and Exclusive Economic Zone’. Moreover, Yemen stressed that Somalia’s claimed EEZ ‘extends into areas where Yemen possesses sovereignty, sovereign rights and jurisdiction, fully encircling Yemen’s islands of Socotra, Sambad and Add Al Kuri, together with the other islands belonging to Yemen in their vicinity’ (Letter to DOALOS, 10 December 2014).

The delimitation of the other (southern) end of Somalia’s claimed maritime zones, with Kenya, is currently pending before the ICJ, to which it has been submitted in August 2014 by Somalia. The latter seeks the delimitation of the complete course of the single maritime boundary dividing all the maritime areas appertaining to Somalia and to Kenya, including the continental shelf beyond 200 nautical miles. Both Somalia and Kenya are parties to UNCLOS, and both have made declarations accepting the compulsory jurisdiction of the Court, although these exclude disputes in regard to which the parties have agreed “to have recourse to some other method or methods of settlement”. On 2 February 2017, the Hague Court rejected preliminary objections raised by Kenya, revolving around the status of a bilateral memorandum of understanding to delimit their boundary by negotiation only after the completion of the Commission on the Limits of the Continental Shelf (CLCS) review of their submissions. and found that it has jurisdiction to entertain Somalia’s application and that the latter is admissible. The time-limit for the filing of the Counter-Memorial of the Republic of Kenya, in that case, has been fixed to 18 December 2017. A final judgment may reasonably be expected during the course of 2018.

Pierre-Emmanuel is a lawyer and a consultant in public international law, international investment law and dispute resolution. He has advised Asian, European, Middle Eastern, African and Latin American governments, as … Continue reading