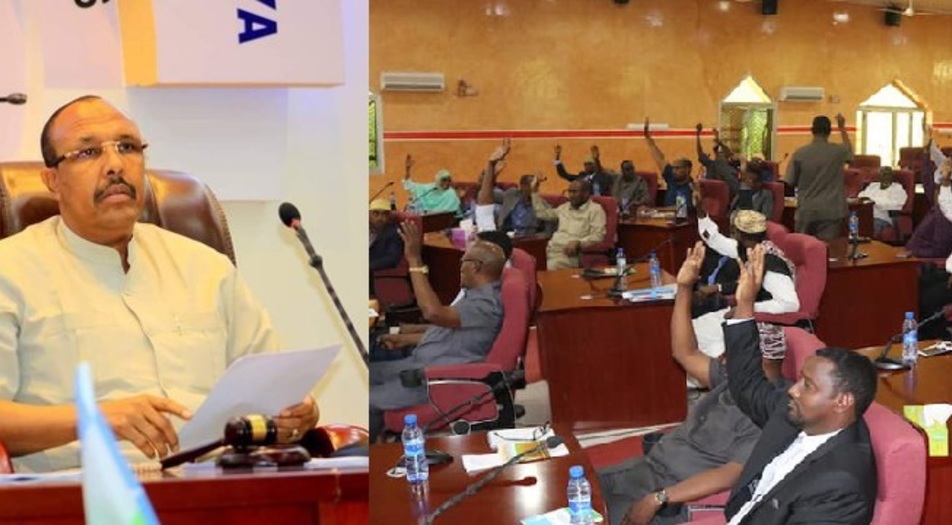 The parliament of the federal state of Somalia’s Puntland has, today, ousted its Speaker on a vote of no-confidence taken during Thursday’s morning session.

Out of 53 MPs present, 49 were said to have voted for the ouster of Speaker Abdikahim Mohamed Ahmed ‘Dhoobo-Daarood’ where 4 abstained. 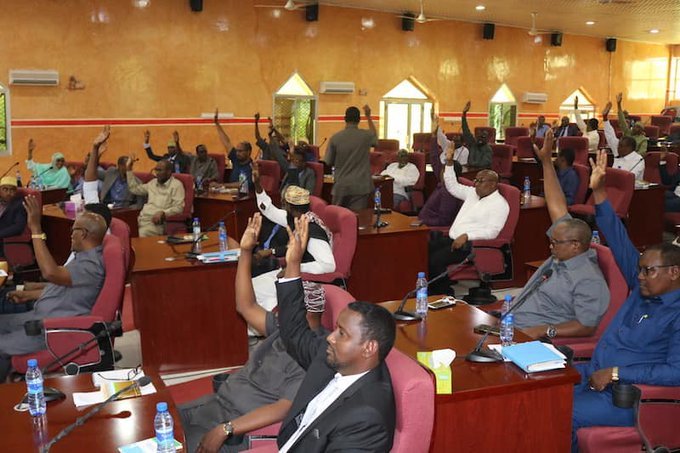 Following a collision of interests which pitted the Speaker and the President of the federal state, Abdullahi Saeed Deni, for some time in recent months, the government attacked the Parliament House and its guard detachment last evening.

Only a day or two before, the Speaker appeared to have the upper hand. The complete turnabout of the House is affected, a grapevine leak alleges, was facilitated by liberally greased palms.

The Speaker, in an interview he granted to the owner of Youtube media channel, Shiine Culay, at 2:00 am this morning, confirmed that one of the soldiers on guard at the parliament and two civilians were killed on an exchange of fire between the guards and government forces.

He also, in the same interview, accused the president of crossing his executive line into their legislative mandate by forcing his will and policies on the supposedly independent body which had voted the President himself to office in January 2019.

Abdihakim Dhoobo-daarood contended that his clan would review its undivided loyalty to the federal state although its geographical boundaries lay well within the geographical and political borders of the Republic of Somaliland.

” I was responsible for convincing nearly a thousand soldiers from my clan (Warsangeli) to change allegiance from Somaliland to Puntland. I had also brought over the former Somaliland Governor of Badhan to the Puntland side,” he lamented.

Dhoobo-Daarood was confident that he had the backing of his clan and most of the members of the parliament on his side and nothing like what happened a few hours later was possible.

The Deputy House Speaker, Abdiaziz Abdullahi Osman, appointed a seven-member parliamentary committee to prepare the election of a new speaker until 14 November, next Thursday.

President Deni inaugurated the current session of the parliament on 26 October where he had met a barrage of questions which so angered him to force him to leave the premises in fumes. he later ordered the strip of immunity of one of the MPs, Awil Hassan Daad, who, particularly, gunned questions which threw the president out of composure.

The parliament summarily dismissed the government request to disgrace MP Daad on a majority vote on Saturday.

Following today’s loaded session, the Deputy Speaker sent the House into recess – a step that is suspected was a dictation of the President who’s still, principally, under investigation by the House which, earlier, appointed a thirty-member taskforce to present a comprehensive report on government achievements and failures since it came to office.

The ousted Speaker, on the other hand, was suspected by the Puntland government on an ‘unholy’ collusion with Villa Somalia’s young, rash leaders – Farmajo and Khairre – to instigate a motion of no-confidence against President Deni for openly siding with Ahmed Madoobe, the Jubaland federal-state leader.

President Deni has, since he came to power, trained a great deal of attention on creating a hostile environment in Eastern Sanaag of Somaliland with the help of people like Dhoobo-daarood.

The government of Somaliland decided not to militarily engage Deni who, in order to force the Somaliland military into action, crossed over to Dhahar of Somaliland, only two days ago.

Nobody can rightly predict how the situation will further develop given the rumoured rift between the President and the overall Sultan of the Warsangeli Saeed Abdisalam who had arrived in Garowe to mediate the difference between the speaker and the president. He had been given court only last evening despite having been there for some days without succeeding to see the president.

An indication of what hue events can take could be gleaned from an agitated demonstration against what happened to Dhoobo-daarood which Badhan residents staged this morning at that town.

In light of the blitz developments in Garowe, the government of Somaliland is expected, according to sources close to the government,  to alter its pacifist attitude towards Puntland in the wrestle for eastern Sanaag.