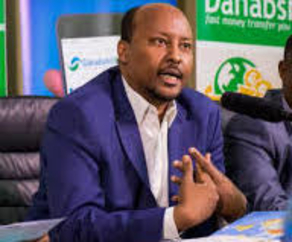 Mr. Abdirashid Dahabshiil, who was part of the VOA Exhibition Program on the role of private and public agencies, said that humanitarian assistance in the areas they operate has a significant role, and the community is always at the forefront of support and assistance.

“There is no way we can predict neither plan for natural calamities that will occur this such as floods and drought devastations, but whenever such disasters occur we at Dahabshiil make decisions based on needs and where. From there, always, we consider the problems faced by the affected population and where regardless of the clan and political affiliations.  “We are always working with  those people who suffer because they are affected for example a sick person, those who lost their shelters as a result of floods, mothers who children are faced by problems or sick and hungry people and when our agents on the ground evaluate and assess the situation and inform us that’s when we consider our next course of action. The problems that affect the people also affects Dahabshiil since we serve the people and our corporate duty calls on us to contribute in the strength and to the best of our capabilities “, the CEO of Dahabshiil group of companies said.

Dahabshiil CEO said that the way they get involved in such undertaking is to make their services free. “When we see people who are in crisis and maybe some of our customers are not, then we decide on ways to get involved, fund projects, and sometimes make the service free of charge. Somali NGOs and those in the diaspora send money through Dahabshiil since we operate in more one hundred and twenty-one countries across the world sending money and we encourage them to help the community.

“Many young people abroad and designate themselves when they see the problems of the community effort to collect the money does come to us when they do not do what we can to deal with, “he said, according to exist. Many young people living abroad send money whenever there such problems affecting the people and they come to us with money collected and we assist them wherever possible, “Mr. Abdirashid stated.