General Abdirahman Abdi Hussein, a.k.a. Guulwade, lauded the extrajudicial massacres, massive persecution of civilians and destruction of whole cities which the regime he both serves and was related to committed against hundreds of thousands of Somaliland-born civilians in the late ’80s.

Abdirahman Hussein was the Deputy Chairman of the committee Mogadishu appointed for the talks between the two erstwhile partner-countries in the now-defunct Somali Republic at the time he granted Garnaqsi programme of Shabelle TV the interview.

A day, Wednesday, he either resigned or was made to do so.

Abdinur Mohamed, the Villa Somalia Director of Communications, intimated that the resignation was forced, contrary to the claims of Guulwade on a voluntary resignation.

“His views do not represent the Committee, nor the Federal Republic of Somalia which is guided by the vision for unity, brotherhood, and oneness,” the director stated.

General Hussein, a son-in-law, to the military strongman he served, General Mohamed Siad Barre, was at first the commander of a semi-military command called the ‘Guulwadayaal’ – Victory-Bearers’, to become the last Police Commander of the Somalia forces later just before he, his father-in-law – the President, and all of that government fled the capital on 26 January 1991. He also served as an ambassador for his father-in-law at some time toward that regime’s waning years. 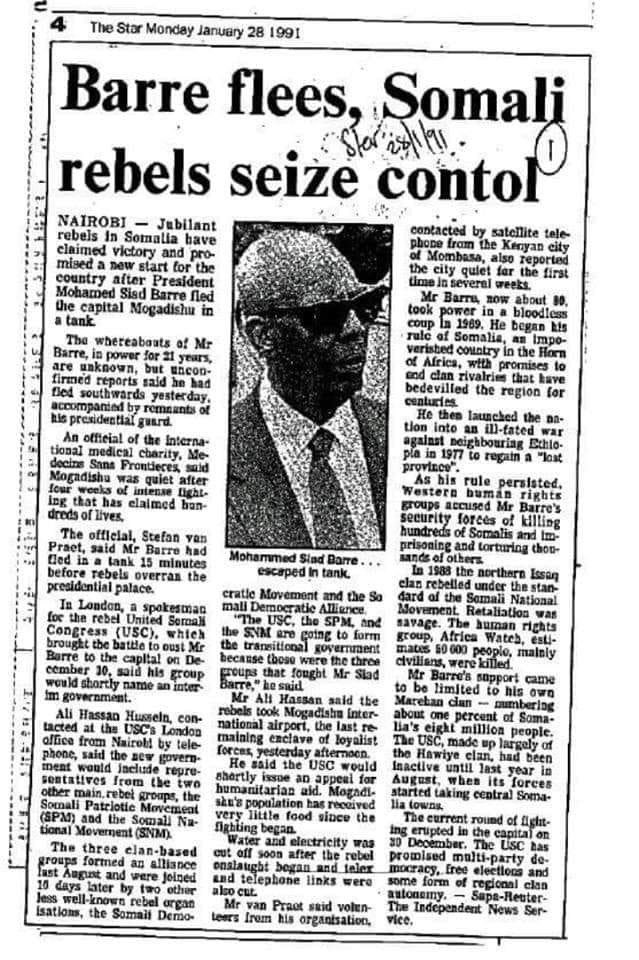 The ex-general cited how the United States put down uprisings by killing, – in his words – ‘several hundred rioters’ in places like Los Angeles before restoring law and order.

“It is true people were (indiscriminately) strafed by fighter planes. It is true that civilians were killed. No country in the world acquiesces to threats on its sovereignty and unity,” he told the reporter, Yussuf Hassan, who put the question to him on Shabelle TV.

Congratulations to Yusuf Hassan in his professional interrogations to one of the war criminals. When this man has appointed such a dialogue between two sides, that was a clear indication the Mogadishu administration is far away from any meaningful talks to happen. https://t.co/MsUBiSR5Qn

Guulwade claimed that the insurgents who were at the time fighting against the brutal military regime wanted to tear the country asunder.

“It is fully justified that all available force must be brought to bear on any situation which threatens basic unity of the country,” he said. 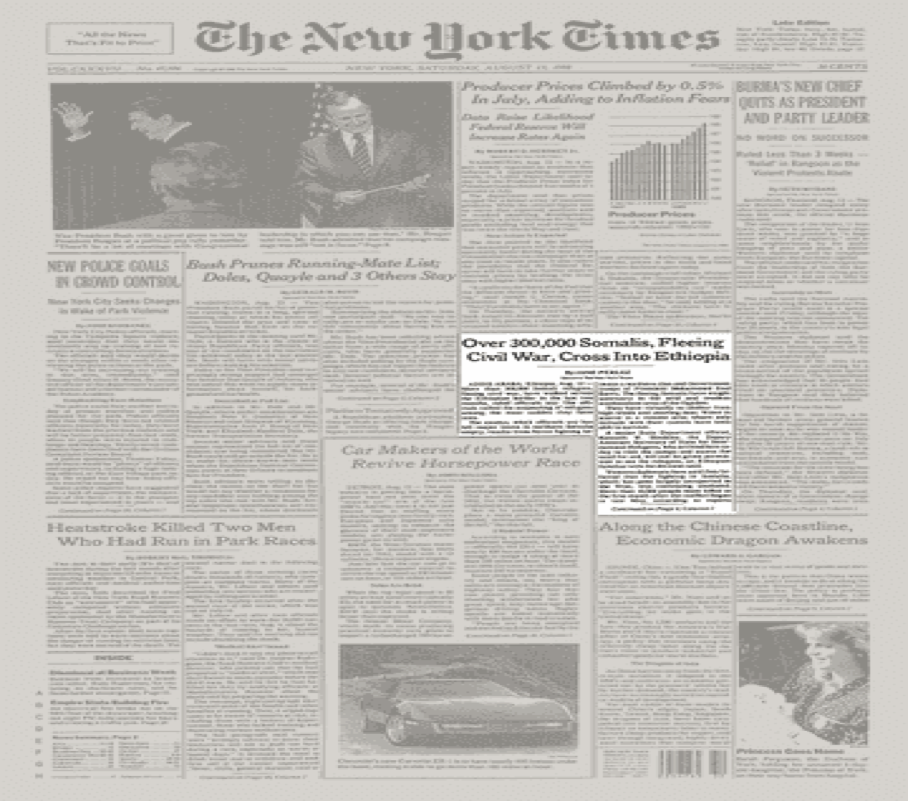 Guulwade dismissed the loss of more than 50 000 civilians and the flight of more than 300 000 civilians to Ethiopia for refuge merely as a token measure to bring back law and order to the area. The massacres left tens of thousands more maimed and/or traumatized for life.

The military regime hired mercenaries to fly F16 and Russian mirage fighters to carry out sorties which left more than 80% of Hargeisa, the present-day capital city of the Republic of Somaliland demolished and in ashes and rubble.

“They (SNM) entered the city (Hargeisa),” he said. “Nobody can say what happened there is unjustified and what happened in Mogadishu is,” he added, referring to costly militia confrontations in Mogadishu in the early ’90s, claiming killing whether it was perpetrated by governments or militias was killing.

He is happy about this tragedy & agony, the death & destruction of #Somaliland cities. B/c he feels belonging to that evil and immoral regime who destroyed the glory of the Somali people. This is a wake-up call for us & a whistle-blower which unveils the reality in Villa Amison. pic.twitter.com/lUmHviMx8D

Mr Guulwade continued to haltingly deny that the unrestrained might which the military regime bore on Somaliland the brunt of which was born by civilians was not systemized as evidenced by history throughout the interview. Below is a copy which General Morgan, another son-in-law of the ruling dictator, and the commander of the 26th army division as well as the Governor of the then Northwestern region wrote at the time. 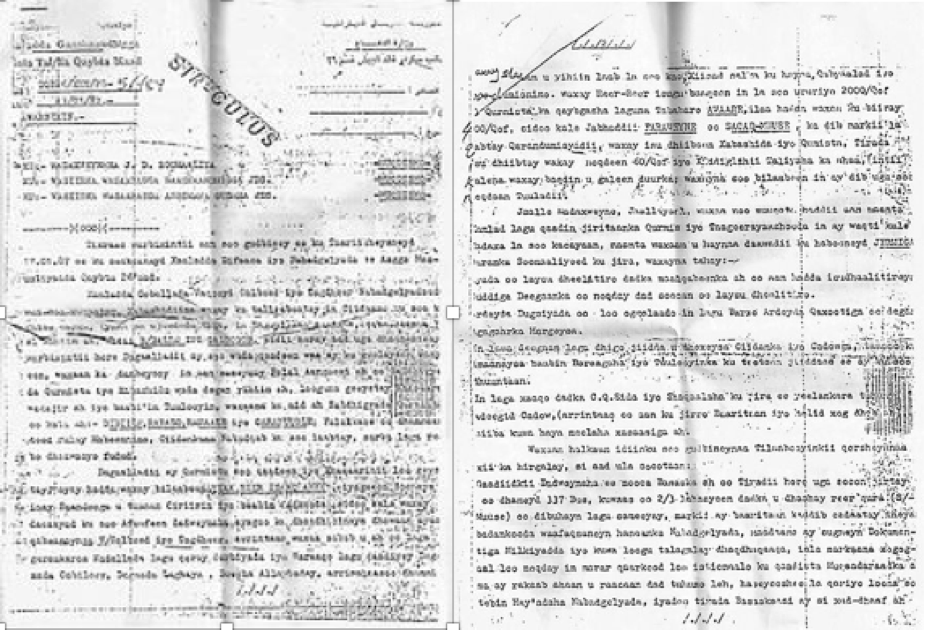 Among the steps General Morgan proposed to his father-in-law, the dictator, were:

Not only Somalilanders but almost everybody who was not blinded by own phobias against Somaliland was outraged.

Guulwade, the handpick of Somalia federal president Farmajo for the impotent, unproductive talks between Somalia and Somaliland, his cousin, related to the former, killer president, and a commanding general who contributed much to the massacres in the then northern regions of Somalia, reflected what many pointed out as the accepted, collective mindset of the FGS and many southerners. At least, some said, he voiced what many believed but left unsaid.

The general’s jesting statements on the traumatizing genocide committed against Somalilanders earned him the 148th place on the Somaliland war criminals’ list.

What the Genocide Commission are doing is great, but we need it to be EFFECTIVE. Just collecting lists of names is not enough!

We need full collection of victims' testimony. We need thorough documentation of evidence. We must store evidence in archival formats… pic.twitter.com/dK8m49r1Fq

Neither Mr Guulwade nor Farmajo has yet to admit that Somaliland and Somalia were only first introduced in 1960. From the word ‘go’ in the intended ‘merger’ between the two states to pave the way for a ‘Greater Somalia’, southern domination ruled the day which, in part, was made easier by the absence of a signed ‘union’ charter which should have delineated roles and shares.

Ex-Minister Abdirahman Yussuf Duale, a veteran member of the homegrown freedom fighters whose daring raids crippled the mighty army of the military dictator, said Mr Guuleade’s words were indicative of all that was wrong with the myopic outlook of Villa Somalia.

"Guulwade is 1000 times better than @M_Farmaajo, at least he is honest enough to state his beliefs, whilst Farmajo is a coward who would never admit to them." #Somaliland must respond, there should NEVER be any talks with this #faqash regime. pic.twitter.com/8je4dqO3bl

Many in Somaliland and elsewhere are calling for a cessation of talks with Somalia which have become – at best – a procrastinating factor which only serves Somalia’s claims over Somaliland – a Somaliland that had every right to withdraw from an unconsummated, illegitimate ‘union’ that it went into voluntarily.

The informal Consultative Forum called for a total withdrawal from the talks.

“Not only it is evident,” they said, “that Somalia has no intention of ceding whatever hold it had on Somaliland but that, also, the psyche that ordered and executed heinous massacres is still there in Somalia leaders”.

Likewise, a great number of politicians and leaders condemned the ‘sanctioned words’ of Mr Guulwade as many put them.

Mr Guulwade was part of a committee Farmaajo appointed who included, too, at least three or member members who originally hailed from Somaliland to make it appear that the talks were not between the Somaliland and Somalia of the pre-60s but between Somalia and a ‘runaway, secessionist’ Somaliland that was rightfully Mogadishu’s.

Political analysts have many a time propounded that Somaliland was only wasting precious time kowtowing to the ‘whimsical orders’ of a world that had no inkling of the true histories of Somalia and Somaliland let alone of a so-called union between the two caring even less whether it was legitimate or not. The world squarely sided with Somalia for reasons only be-known to it denying the Somaliland public the fundamental, human rights tenets which adversely impact on their social, economic and political well-being in every way as enshrined in the UN’s own Declaration of Universal Human Rights, the OAU Consultative Charter, and so on.