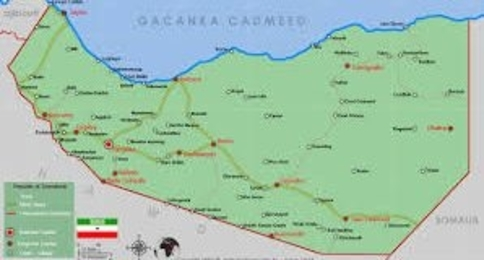 The Republic of Somaliland took umbrage of a recent statement the international development partners for Somalia and Somaliland released to express re-affirmation of ‘..their commitment to supporting preparations for the 2020/2021 federal elections’.

The statement, however, did not confine itself to federal elections and matters concerning the UN-backed federal government of Somalia elections comprising the Villa Somalia seat of the government in vaccuum-pendulating Benadir and the five federal states of Puntland, Galmudug, Hirshabelle, Southwest and Jubaland. Together, the six are signatories to the federal constitution on which their federal system is based.

The statement, instead, devoted a whole paragraph on calling the resolution of outstanding issues which the recently-passed Somalia electoral bill overlooked or ephemerally touched.

The partners, despite their deep understanding of matters pertaining to Somaliland and Somalia chose to include Somaliland in issues that they found remained ‘unresolved’. To them, Somaliland was no more, no less than Somalia’s Benadir region which was neither a federal state nor included in any one of the five existing states.

“The partners stressed the importance of finding solutions to aspects of the bill that remain unresolved, such as the definition of constituencies, the allocation of Upper House seats, progress in achieving the Somali goal of “one person, one vote,” measures to ensure a minimum of 30 per cent representation of women, voting arrangements and representation for Banadir and Somaliland, as well as other operational arrangements.  They called on the Parliament to finalize an implementable law without delay to avoid a risk of political instability,” the statement said.

Unlike Somalia whose voting is decided by a few ensconced behind barricaded closed doors guarded by AMISOM and other international and national security detachments,  the 30-year-old, unrecognized Republic of Somaliland has put six one-person-one-vote elections behind it with five presidents peacefully changing places with rift or rancour.

The international partners who, themselves, attested to the free and fair elections as international domestic observers chose to continue the charade that Somaliland was ‘legitimately’ represented at federal Somalia’s executive, legislative and judiciary branches, choosing ‘selection’ over ‘election’ despite their contributions to the Somaliland electoral system.

Consequently, the Republic of Somaliland showed incredulity on the partners’ statement dated 28 January 2020, and the calculated slur on the ‘hard-earned’, costly restoration of the country’s 1960 independence.

“The Government of the Republic of Somaliland, in light of a recent joint press statement in January 28, 2020, on Somalia’s electoral law by its international partners, would like to caution the international community against any interventions in the region that risk compromising Somaliland’s hard-earned, lawful and legitimate sovereignty, territorial integrity and political independence,” a statement which the Somaliland Ministry of Foreign Affairs released on 1 February emphasized.

The statement pointed out that the country’s national constitution, alone, guided its affairs. Neither Somalia, in other words, nor any other entity had a legitimate say so in Somaliland affairs.

“Somaliland’s vibrant and well-functioning democratic system of governance, which has taken root in the country over the past three decades, derives its highest authority and legal force solely from the Constitution of the Somaliland Republic, which alone reflects the democratic will and self-determination of the Somaliland people. In other words, it is unfortunate that the press statement released by international community seeks to incorporate East Africa’s strongest democracy (Somaliland) into Somalia’s experimental and unresolved electoral process,” the statement said.

The statement went on to underline how the form of governance that Somaliland put in place in an otherwise volatile region had helped foster peace and stability in the region as a whole as it, also, served as a beacon of hope and a bastion for democracy worth emulating.

“..the international community must equally maintain its commitment to act as an honest and neutral broker and avoid taking any stance which risks doing harm to the region’s peace and stability,” it stressed.

The statement quite adeptly reminded the international partners that the Republic, per their express wishes, was still committed to the continuation of the Somalia/Somaliland talks as two equal, erstwhile partners – which the partners’ statement seemed to sideline in its phrasing and insinuation of Somalia-owned Somaliland.

“The Somaliland Government continues to welcome efforts by its international partners to encourage dialogue with our neighbour, Somalia, to ensure peaceful and cooperative relations between our two nations. For such talks to succeed, and for it to win the hearts and minds of the Somaliland people, they must occur in an environment where all sides respect and safeguard the irrevocable decision of the Somaliland people to independently manage their own political affairs, and in particular their own democratic self-governance,” it said.

The statement, most interestingly, came out while the EU Ambassador to Somalia/Somaliland, Nicholas Berlinga Martinez, was on an official visit to Somaliland. More interestingly, the ministry of foreign affairs which may have raised the issue was excluded from the meeting the President, Musa Bihi Abdi, had with Mr Berlinga on Saturday.

Whatever the case, the Somaliland Public expect an apology without which much can change on their outlook towards a double-dealing international community. 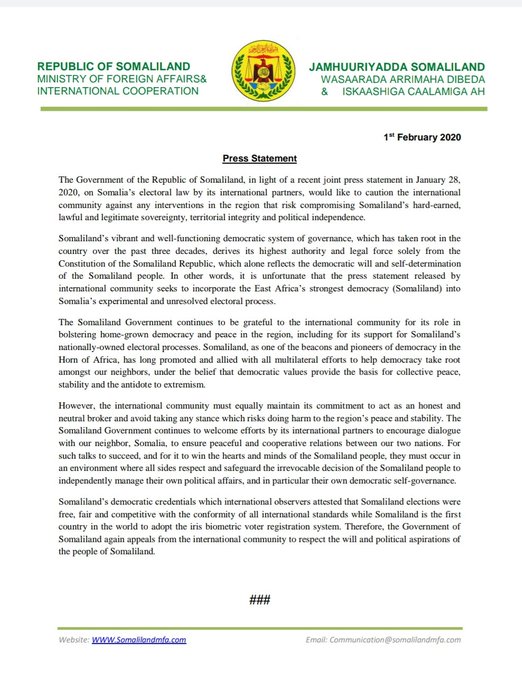 In order for elections to be held on time, it is essential that an implementable electoral law be adopted as a matter of priority, in keeping with the Mutual Accountability Framework agreed between partners and the Somali authorities in October 2019.

The partners held a series of meetings in recent weeks with key stakeholders in the electoral process including with the National Independent Electoral Commission (NIEC), Speakers of the House of the People and the Upper House, the Upper House Ad-Hoc Committee in charge of reviewing the current electoral bill, and the Somali Police Commissioner who chairs the National Security Task Force responsible for developing the security plan for the elections. Discussions centred around the importance of Parliament adopting an implementable and fundable electoral law in a timely manner, before the end of its current session, and on preparing a plan, including a budget, for the arrangements to secure the elections.

The partners stressed the importance of finding solutions to aspects of the bill that remain unresolved, such as the definition of constituencies, the allocation of Upper House seats, progress in achieving the Somali goal of “one person, one vote,” measures to ensure a minimum of 30 per cent representation of women, voting arrangements and representation for Banadir and Somaliland, as well as other operational arrangements.  They called on the Parliament to finalize an implementable law without delay to avoid a risk of political instability.

Partners have continued to provide technical support to the NIEC to jointly prepare and present options for Somali actors to resolve the outstanding issues in the draft bill.  At the request of the speakers of the two houses, the United Nations has provided a document, prepared jointly with the NIEC, with details of these options for their consideration.

Somalia’s international partners urge that Parliament seriously consider these technical options and agree on an implementable law before going on recess.