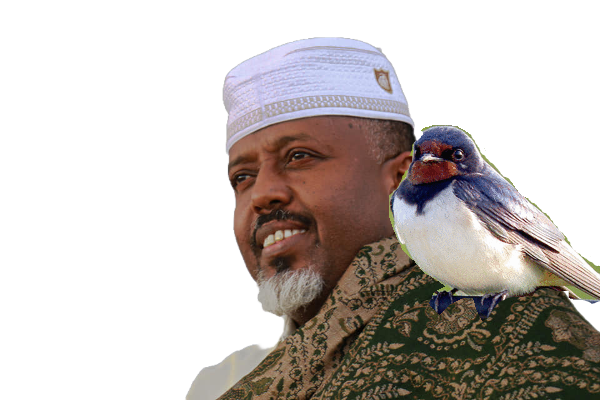 One day my shoulder received a visit as unexpected as it was equally welcome: a small swallow settled on me. It was blind. I found out later that this was a new condition for my tiny guest, until a few days back, in fact, its vision was perfect. To bring it to me on that sunny afternoon was an emergency landing: an emergency because suddenly missing her strength to continue flying, she had to go down without warning; risky because since the little swallow had no visual reference, it could not know if my shoulder was a tree or the mouth of a hungry cat waiting for a mouthful to swallow, or, again, a deep hole. The bird clung to me with all its might and it managed not to fall, despite the movement of my walking.

As the little swallow understood that it was blind, it felt helpless and fragile. Besides, it was tired of flying in the dark and hungry. It understood that if it managed to stop, without hurting itself, it could never fly again. Ability lost, an ability gained as suddenly the pet could speak and got knows its new ability.

“Do I bother you standing on your shoulder?” Asked the little swallow.

“Why do you think about this?” I replied trying to mask my surprise at hearing that a bird speaking.

“It disturbs you the way people look at you!”

“No,” I clarified, “and in any case, I am not bored at all having you on my shoulder.”

“So is it true that I’m bothering you?” Replied the animal as if it hadn’t heard my words.

“What makes you think that?”

The chat proceeded in an autistic way, hindered by my disbelief, on the one hand, and by her sadness, on the other.

“Don’t cry,” I whispered to the little swallow.

“I’d like to see you walk without me on your shoulder.”

In the days that followed our first meeting, the swallow and I became friends. The bird was then aching more and more, as the affection grew because he could not see me and he could not imagine my face. More than anything else, however, it saddened her that she was unable to procure it to eat and not be self-sufficient. When I tried to console her by saying it that I would have thought to feed her forever, the little swallow showed itself more and more sad. She then listed many other things she missed.

One day, thinking that my little friend had fallen asleep, I tried to touch her feathers, but she was awake and reacted with a determined movement. I apologized for the inconvenience and started talking as if we didn’t ever stop conversing.

“I brought you some food,” I said in a low voice.

“What’s the use of eating?”

I tried to console her, to change the subject, but every word, every gesture, it took us back on the same road. I tried to insist on the food.

“You were flying to places where you could find food, weren’t you?”

“What do you miss most?”

“I would like to fly again, and with you fly and see the world.”

“But if you barely know me, why would you want to fly with me? And why should I fly too? “.

“You could see the world with me.”

“But I can see the world without flying,” I said to her deliberately ignoring the second part of her sentence.

We remained silent for a while, then I heard the small swallow murmur: “What do you need to fly to, if not to see the panorama of the world from the eyes of a bird high on the earth?”.

«Each of us has two wings, wings that know how to fly. We are the ones who make them incapacitated and weak by believing them fragile and inexperienced, but only our will and our courage to think big are lacking », repeated my little swallow.

I suddenly realized that it didn’t have the luxury of being able to close its eyes for a moment, then reopen them and continue to see.

Sharifa liked the story. She revealed that she too was feeling sad, like the little swallow. He did not want to make explicit references to the condition of the Somali people because he did not know me well and did not know whether to trust me, but he still wanted to give me this confidence. I, however, wanted to try to fly. Knowing that you have rights is a privilege. Once acquired, taking them for granted is harm, a mistake. Acquired rights must be looked at, touched, enjoyed and cultivated. These are the rights of which you also know the bite of absence. When you know what you are missing, and at some point you reach it, you hold it tight.

It is a luxury to close your eyes, open them only when you want, and keep seeing.

Nomads Trading with Empires: Intercultural Trade in Ancient Somaliland in the First to Seventh Centuries CE

Three Responses to Grief in the Philosophy of Kierkegaard, Heidegger, and Camus