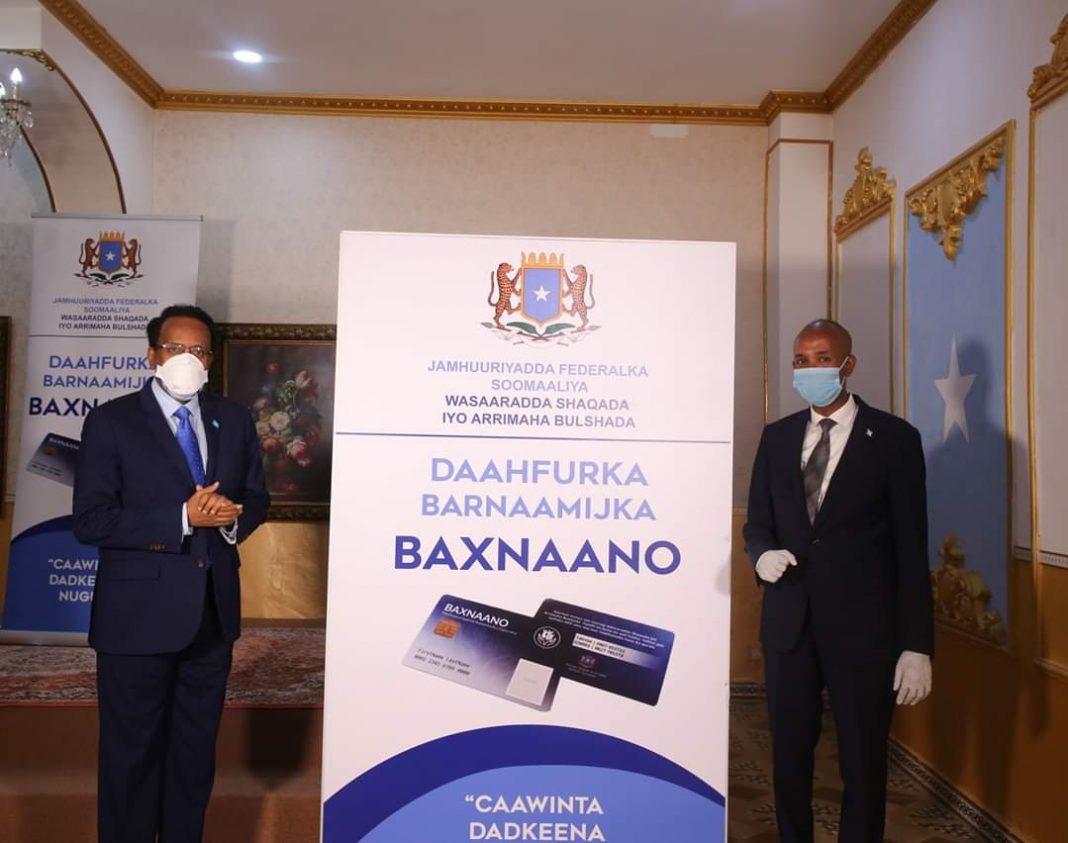 Somalia has used a World Bank-funded humanitarian project it named ‘Bahnano’ to invade the territorial integrity of the Republic of Somaliland, according to a Somaliland Ministry of Foreign Affairs and International Cooperation released Thursday.

TheUS$ 4 million a month initiative as part of the IDA’s  Shock Response Safety Net for Human Capital Project, according to Villa Somalia and Federal Ministry of Labour and Social Welfare plans, openly infringes on Somaliland territory by listing the Somaliland districts of Teleh, Huddun, Badhan, Aynaba, Zeila, Lughaya and Gabiley among the project beneficiaries.  Both the UN and Somalia fully well know where these districts are located and that – short of a full-frontal military occupation, Somalia cannot set foot on any of them directly or indirectly. 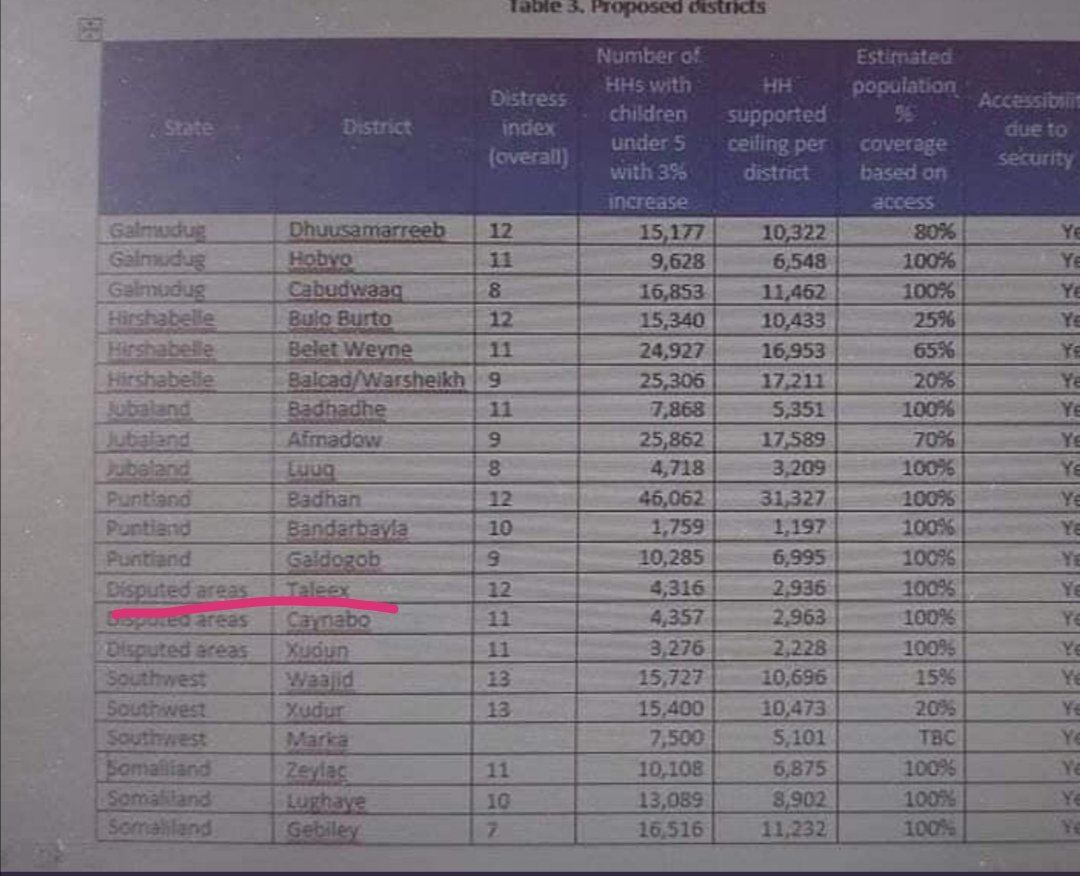 As is depicted above, Mogadishu places Badhan under one of its federal states – Puntland – where Taleh, Huddun and Aynaba, to Villa Somalia, are ‘disputed areas’ despite the fact that all are governed by Somaliland-designated administrations. Zeila, Lughaya and Gabiley are to Mogadishu in a Somaliland not at all distinguishable – or different – from its five satellite, federal states of Puntland, Hirshabele, Galmudug, Southwest and Jubbaland fully well knowing Somaliland was its senior partner in the 1960 ill-fated merger and a country over which it has no say-so whatsoever.

Incidentally, the government of Somaliland has already distributed Ramadan food aid to many of the districts cited in the Somalia list only this past week or so.

It is not clear yet, however, whether the World Bank and the co-funding, co-managing United Nations agencies of UNICEF and WFP have endorsed the Somalia distribution plans or not.

Responding to Somalia’s blatant invasion on its territories, the Ministry of Foreign Affairs and International Cooperation of the Republic of Somaliland released a statement underlining its shock and dismay that the international community has once again been tricked into a participation of a scheme designed to compromise not only the country’s 30-year-old sovereignty but, also, its well-established peace, stability and democratic governance.

“The government of Somaliland informs the United Nations, the African Union, the European Union and the World Bank that the Bahnano Programme of the Mogadishu administration in which it professes that it would cover Somaliland territories is nothing but a blatant aggression designed to undermine Somaliland peace and to, at the same time, mislead international community understanding,” the statement said.

“The Somaliland government emphatically warns the administration in Mogadishu to refrain from its unbridled violation of Somaliland sovereignty and is continued, baseless claims on Somaliland territories,” the statement pointed out.

The statement, addressing the World Bank itself, urged this UN body to doubly make certain that its funds are not used for political leverage by the weak, UN-pampered administration at Villa Somalia.

“We ask the World Bank to pay due attention to how the Mogadishu administration exploits grants given as a political leverage against Somaliland and to sabotage the country’s security and stability,” the statement added.

Lastly, the MoFAIC statement sent out a strident warning to whoever attempts to compromise the nation’s sovereignty, unity and security in any way at any time.

“Ther government of Somaliland strictly cautions all attempts or the participation in the implementation of all projects directly violating the sovereignty and territorial integrity of the Republic of Somaliland,” it concluded. 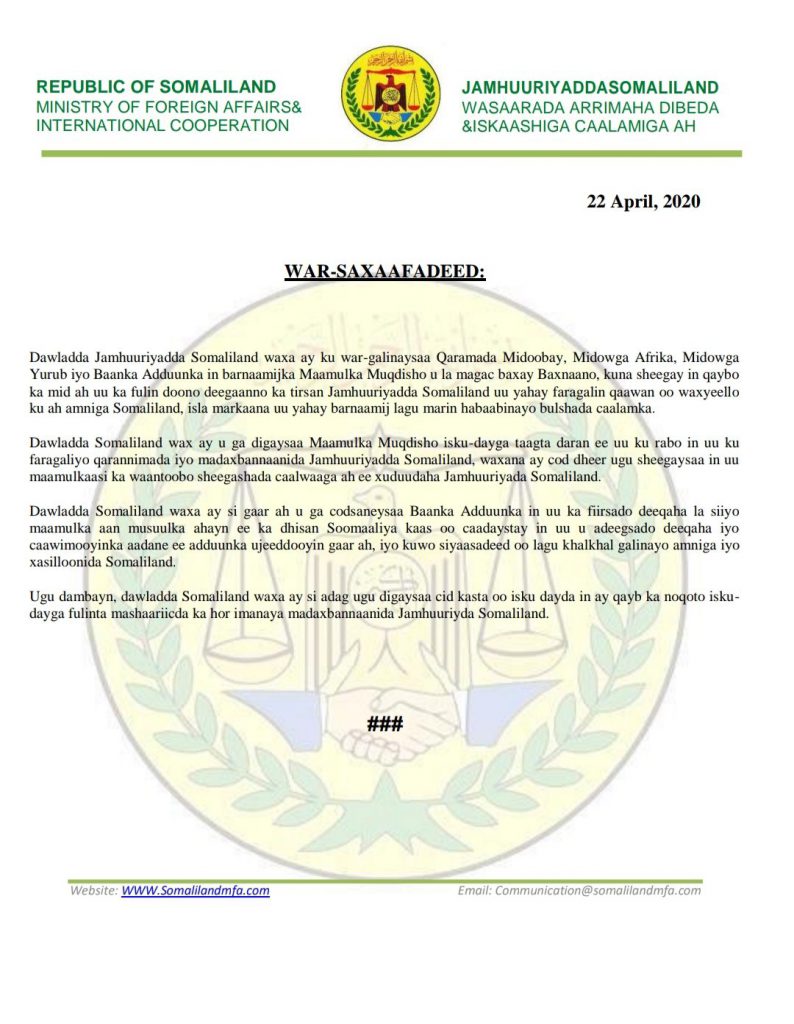 The SNHCP project is an International Development Association (IDA) World bank funded following a proposal put to it by UNICEF and WFP. The latter, according to the scope of the project, will manage the entire SNHCP business cycle using the SCOPE platform and coordinates activities of NGOs, cooperating Partners and Payment Agencies in the field.

Launching the project on April 18, President Farmajo made it appear that the funding came from the Somalia federal government not for once giving credit to the benevolence of the UN organizations.

As a government, we believe in a #Somalia where the most vulnerable in our society access the required support for their prosperity and sustenance. I firmly believe our nation shall overcome uncertainties at critical times such as now during this #COVID19. pic.twitter.com/7w9t2oAdFb

He added that –  perhaps not fully understanding the fine print of the project, that the US$4 million-Dollar scheme will benefit 1.3 million households per month which made the monthly stipend per household US$4.3.

The mistake was later corrected by the ministry responsible for social welfare which stated that the fund will initially cover 200 000 households and will eventually build up to a targeted 1.3 million. Again, the ministry claimed that the plan was, entirely, of its own so sidelining the instrumental role UNICEF and WFP played in designing the project, formulating it and in securing the IDA funds.

“This is the beginning of a ministry-led plan to reduce poverty,” the Minister Siddiq Hersi Warfa said.

It is noteworthy that on 13 April (only five days earlier) President Farmajo was only lamenting the lack of financial capability to cope with the coronavirus pandemic and the protection needed to partly shield the public from its devastating ramifications.

In light of the intentionally flagrant territorial violations and the unconcealed sabotage operations against the peace, security, unity and political stability of Somaliland and the region on the part of an administration that cannot even guarantee the security of its capital, the Republic of Somaliland, sources disclose, is mulling over a total, irreversible withdrawal from the international community-fuelled impotent talks with Mogadishu. Starting in 2012, the talks sputtered into a brief life until 2015 then slipped down to ink on paper sporadically fanned onto the media by international partners whose benevolence to Mogadishu has only given it more leverage to misrepresent itself as an authority over the Republic of Somaliland. Somalia has also unilaterally and brazenly went back on the few agreements reached while the dialogue between the two sides lasted. Neither did the countries which hosted the talks one time or another – the United Kingdom, United Arab Emirates, Turkey, Djibouti – check Mogadishu’s excesses and treaty violations nor did the rest of the international community do so.

The continued silence of the world has led to Mogadishu to use it as tacit support – a development Somaliland and its public has duly noted and is about to react against.

Neither does this latest development augur well for already strained relations between international partners and a Republic of Somaliland which is painfully waking up to the fact that the world is knowingly or unknowingly being used by Mogadishu to promote a rewrite to Somali history shaped around its myopic, arrant views and plans.